For people who work outside, cold is part of the job

Despite subzero temperatures, farmers, tow truck drivers and firefighters brave the cold to get the job done.

For people who work outside, cold is part of the job

When the temperature is below zero, it's one thing to have to run from your car into a warm office. It's another thing to have to actually work outside in this bone chilling weather. Here's how they do it.

Jay Arias, owner Jays Towing, jumps a 2013 Jeep Wrangler at a residence in Shorewood on Tuesday. The recent extreme cold snap has been both a challenge and a boon for workers like landscapers, roadside mechanics and others who are forced to work outside in the frigid conditions.(Photo: Mike De Sisti / Milwaukee Journal Sentinel)

When the temperature plummets, most people put on an extra sweater and try to stay indoors. But for those folks who work outside, it’s freezing out there.

Tow truck drivers, firefighters and farmers are just a few of them.

They’re often in the worst of the frigid weather, handling machines that behave strangely or won’t run at all when the mercury plunges to zero and below.

Try fixing a frozen manure spreader in this weather, said Joel Greeno, a farmer near Kendall, in southwest Wisconsin.

“It’s full of fresh manure and it’s freezing. Every second you wait, the problem gets worse,” Greeno said.

The spreader’s chains are broken, or maybe the tractor pulling it has stalled out. Either way, it can be heavy, hard work making the repairs in a frozen field where the wind chills you to the bone.

“When you sweat, that freezes,” Greeno said.

"We're out there all day breaking ice in pails and water tanks for the livestock," he said. "It's a constant battle."

Too cold to start

In Milwaukee, tow truck drivers were bombarded with calls Tuesday from people whose cars wouldn’t start after being parked in the cold over the holiday weekend.

The cold wreaks havoc on car batteries and electrical components, and fuel lines can freeze in gas tanks that are near empty. Tires flatten easier, too.

"I must have called AAA at least 25 times before I got through. Then I sat on hold for over an hour before I got to speak to a dispatcher," said Jeanne Krueger of Fond du Lac.

A mass of frigid air is expected to keep temperatures extremely cold across Wisconsin for most of the week. Conditions are ripe for black ice, which forms on roadways in extreme cold and causes a lot of accidents.

Some tow truck drivers grumble about the cold while others take pride in withstanding it.

“I look forward to these days,” said Jay Arias, owner of Jay’s Towing in Milwaukee.

His business soars during weather like this, but it’s still tough to be crawling under cars in the dark, sometimes on the edge of a busy highway.

Often, mechanics take off their gloves when they need them the most because getting a grip on some things with gloved fingers is nearly impossible.

If you spill fuel on your hands, they turn to ice in seconds, said Danny Strupp, owner of Strupp Implement Inc., a heavy equipment dealership in Slinger.

“Batteries, hydraulics, fuel, everything is cold. It’s like taking your car, or your tractor, and putting it in a freezer,” Strupp said. 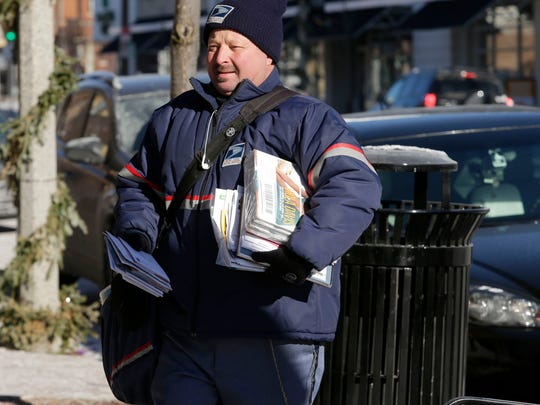 "You got to dress warm and just keep on moving," says Gary Szalewski, a U.S. Postal Service letter carrier, as he delivers mail in the cold along N. Downer Ave. near E. Belleview Place in Shorewood. (Photo: Mike De Sisti / Milwaukee Journal Sentinel)

Firefighters had to rotate out every 20 minutes to warm up, and equipment had to be switched out order to keep it running.

“Everybody worked together,” Joas said.

“Obviously we don’t want people sitting and freezing on the side of the road,” he said.

The cold poses a threat to homeless people, and Weber said police officers have handed out blankets to those in need of a little extra warmth.

Officers also take precautions for themselves with heavy jackets and long underwear to fend off the cold.

It's been so cold, even phone lines have frozen.

Due to "severe cold and icy conditions," AT&T Inc. said Tuesday, some customers in the Milwaukee and Madison areas have experienced service outages.

FacebookTwitterGoogle+LinkedIn
Photos: Outside workers deal with the cold
Fullscreen

Jay Arias, owner Jays Towing, jumps a 2013 Jeep Wrangler at a residence in Shorewood on Tuesday. The recent extreme cold snap has been both a challenge and a boon for workers like landscapers, roadside mechanics and others who are forced to work outside in the frigid conditions. Mike De Sisti / Milwaukee Journal Sentinel
Fullscreen 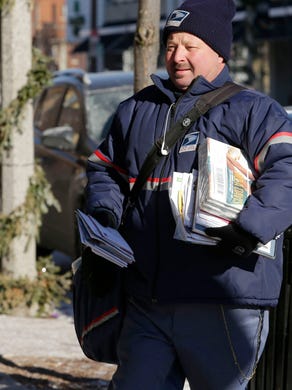 "You got to dress warm and just keep on moving," says Gary Szalewski, a U.S. Postal Service letter carrier, as he delivers mail in the cold along N. Downer Ave. near E. Belleview Place in Shorewood. Mike De Sisti / Milwaukee Journal Sentinel
Fullscreen 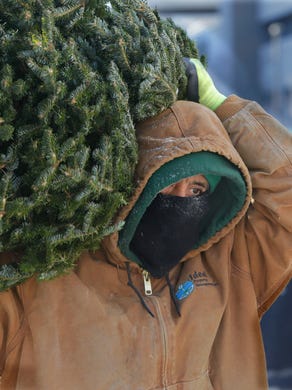 Jose Reyes of Ideal Property Management is bundled up from the cold as he hauls away unsold Christmas trees from a tree lot at Pere Marquette Park in Milwaukee. Mike De Sisti / Milwaukee Journal Sentinel
Fullscreen

In these temperatures, water pipes can freeze and burst, flooding homes and businesses.

It happened in Madison last week, where fire crews were dispatched to a business on N. Frances St. to investigate an activated alarm, only to find that water was gushing out of the basement where a pipe had broken.

There was a lot of steam, which had set off one of the smoke detectors, Madison firefighters said.

Water pipes that freeze are usually on outside walls exposed to the cold, said Chris McBrair, owner of Watters Plumbing in Menasha.

To keep pipes from freezing, make sure the pipes closest to exterior walls, and in crawl spaces, are wrapped in insulation or heating tape.

During really cold weather, it helps to open the cold water tap and let the water run at a trickle to keep it moving in the pipes. And before you go away, set the thermostat at no lower than 55. 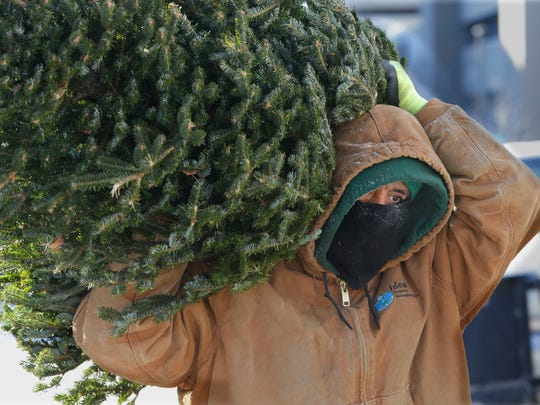 Jose Reyes of Ideal Property Management is bundled up from the cold as he hauls away unsold Christmas trees from a tree lot at Pere Marquette Park in Milwaukee. (Photo: Mike De Sisti / Milwaukee Journal Sentinel)

If you smell sewer gas in the house, it's probably from a frozen vent line.

"We are seeing more of that than normal," McBrair said.

After a couple of mild winters, some people may have become a bit complacent.

"Maybe they forgot what it was like to be really cold," McBrair said.

Chris Mueller of the USA Today Network and Colleen Kottke of Wisconsin State Farmer contributed to this report.