Neighbors came to help with the harvest after a 76-year-old farmer in southern Wisconsin died at home with corn still standing in his fields. 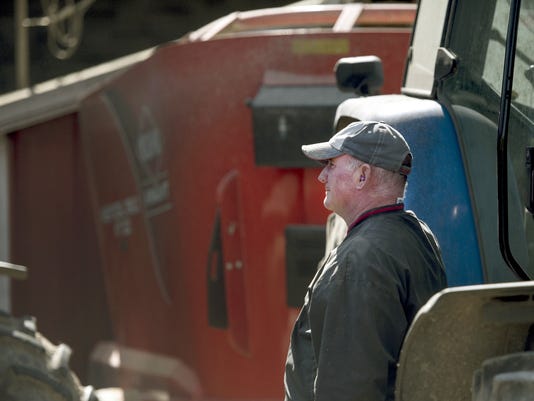 In a Tuesday, Oct. 17, 2017 photo, Jeff McNally, right, watches as a fellow Milton, Wis. farmer dumps high moisture corn into a gravity box in Milton, Wis. Farmers from the community helped Jeff with farm work after the recent death of his father, Tom McNally.(Photo: Angela Major/AP)

MILTON (AP) - Neighbors came to help with the harvest after a 76-year-old farmer in southern Wisconsin died at home with corn still standing in his fields.

"It's just neighbors helping neighbors," said Tom Reed, one of the area farmers who came to the McNally's farm to help.

Tom McNally died on Oct. 16. Besides serving in the U.S. Army and studying at the University of Wisconsin-Madison, Tom McNally spent his whole life farming.

The McNallys have about 500 acres of corn and soybeans, Jeff McNally said.

"Once we get going, it won't take long," Hanuska said. "We're harvesting high-moisture corn to go into the Harvestore."

The high-moisture corn is used to feed cattle in the McNally's dairy operation, but it dries out the longer it stays in the field.

Tom McNally and his father, William McNally, had some award winning herds, according to Janesville Gazette records.

The McNallys were honored for having the top herd in 1979 by the Rock County Dairy Herd Improvement Association. Their 61 cows averaged more than 17,000 pounds of milk, which was quite an accomplishment decades ago.

They were then honored a decade later by the Tri State Breeders Cooperative for herd productivity. The farm has been in the family for more than a century.