Grange organizations across the state brought farmers together to share knowledge and to socialize.

The South Greenville Grange Hall has been added to the Wisconsin Register of Historic Places. 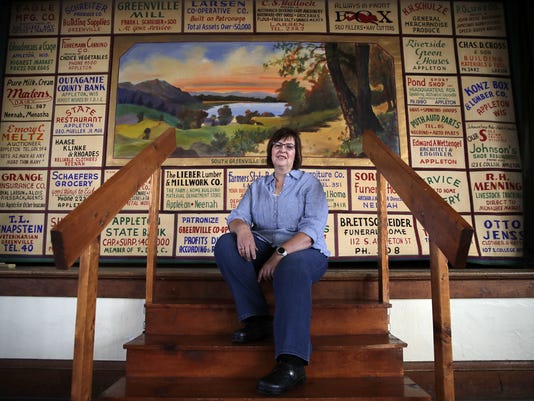 Jean Goffard, a fifth-generation member of the South Greenville Grange, sits at the front of the stage in the second-floor dance hall. The backdrop displays advertisements from 1940.(Photo: Danny Damiani/USA TODAY NETWORK-Wisconsin)

GREENVILLE - Walking through the doors of the South Greenville Grange Hall is like being transported into a bygone era.

As soon as one enters the two-story brick building at the northeast corner of State 76 and Outagamie County BB, the sound of the highway traffic fades, and time seemingly stands still.

Just beyond the front entrance is a lobby with a ticket booth and cloakroom. It's not hard to imagine a crowd of finely dressed townspeople arriving for a three-act play or masquerade ball.

"In my parents' time, they talked about meeting at the Grange," said Jean Goffard, a fifth-generation member of the Grange. "They had lots of dances here, and when you were young and single, you came to these dances. There are a lot of people in the area who met here through the Grange dances."

The Wisconsin Historical Society recently recognized the social importance of the South Greenville Grange Hall and placed it on the Wisconsin Register of Historic Places.

A listing on the National Register of Historic Places likely will follow in the coming months.

Peggy Veregin, Wisconsin's National Register coordinator, said the Grange Hall is special because it was the social hub of rural life in Greenville. To some extent, it still is. The South Greenville Grange is the oldest functioning Grange organization in Wisconsin.

The South Greenville Grange Hall is the third Greenville property to be listed on the Wisconsin Register of Historic Places. (Photo: Duke Behnke/USA TODAY NETWORK-Wisconsin)

"We are happy to recognize this building because it really is such a centerpiece in the social network of the community," Veregin told USA TODAY NETWORK-Wisconsin.

The public will have an opportunity to see the Grange Hall during an open house from 2 to 4 p.m. Oct. 28. Tours will be offered, and Goffard is exploring the possibility of opening a time capsule that is contained in the building's cornerstone.

The National Grange, founded in 1867, is a nonprofit, nonpartisan fraternal organization that advocates for rural America and agriculture. It grew to prominence in the decade after the Civil War as it lobbied on behalf of American farmers to lower rates charged by grain storage and transportation companies. It later promoted rural free mail delivery by the U.S. Post Office.

The South Greenville Grange organized in 1873 as part of the Grange movement that swept across the country. It brought farmers together to share knowledge and to socialize.

"They saw that a lot of farmers were on their own trying to figure out the best ways of farming," Goffard said. "They would bring in speakers and trade ideas."

Members of the South Greenville Grange built three other halls, all within a mile of each other, before constructing the current hall in 1928.

Goffard described the building as "one of the grandest Grange halls in the United States."

"It is often asked if the Grange Hall was originally built as a school or as a community building, but it was built solely as a Grange Hall," she said.

The South Greenville Grange was the first cooperative in the town. It had a store inside the Grange Hall and bought groceries wholesale, along with seeds, feeds, binder twine, coal and gasoline, for sale to its members.

In addition to the store, the first floor of the building has a kitchen and dining room, plus the aforementioned lobby, ticket booth and cloakroom.

"To me, it's one of the coolest areas of the hall," Goffard said of the ticket booth. "You don't see things like that anymore."

Membership in the South Greenville Grange reached 400 at one point, Goffard said, and women were admitted on an equal basis as men. Today, the Grange's membership has dwindled to about 20 people.

Members meet at 4:30 p.m. on the second Sunday of the month. It is one of two Grange halls in Wisconsin still in use by Grange organizations. The other is the La Prairie Grange Hall near Janesville.

Annual membership dues for the South Greenville Grange are $20.

Goffard began attending Grange activities at age 5 and officially joined the organization at age 14. She has been a member for 46 years.

Beyond Grange activities, the hall is available for rent for meetings, craft fairs, parties, bridal showers and wedding receptions.

"That's how we generate most of our income to pay our expenses," Goffard said.