Time to let go of her beloved '57 Chevy

Time to let go of her beloved '57 Chevy 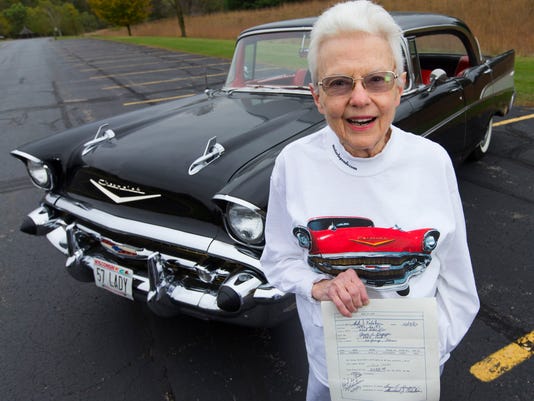 Grace Braeger holds the original bill of sale for her 1957 Chevrolet Bel Air at her residence in West Bend, Wis. It has been her only car since she bought it from a dealer 60 years ago when it was used as a demonstrator.(Photo: Mark Hoffman / Milwaukee Journal Sentinel)

It's time, Grace Braeger says. Time to sell her shiny black 1957 Chevrolet Bel Air, the car she bought 60 years ago Sunday and the only one she has driven since then.

She had the same thought when the car turned 50 and again at 55 and 57, but this time she insists she means it. And she won't cry when the buyer drives away.

I want to believe her, but this sweet ride and this sweet woman have been inseparable for so long. The license plate, 57 LADY, refers to them both. It's like they're powered by the same 8-cylinder heart.

Grace bought the car Oct. 15, 1957, from King-Braeger Chevrolet in Milwaukee, though she doesn't think she's related to that Braeger. The four-door hardtop was a dealer demo and came with 4,239 miles on it. Grace traded in a 1950 Chevy and paid $2,250 in cash.

The bill of sale sounds comical now as it says, "Car being sold with a 4,000 mile or 90 day warranty, whichever comes first."

When I visited Grace last week in West Bend, the odometer showed 21,302 miles, plus another 100,000 that rolled over. Many of those miles were logged in St. Louis, where Grace lived and worked for years before returning to Wisconsin in 2001.

These days, she puts less than 1,000 miles a year on the car, avoids taking it out in the rain, and tucks it away all winter. It's been two years since she drove into Milwaukee.

"The 20-something career lady has become the proverbial little old lady who drives to the grocery store, to appointments and to church," she said, declining to reveal her age.

But unlike just about everyone else who owns a collector car like the iconic '57 Chevy, this is her only vehicle, her everyday ride. She thinks that should put her in the Guinness record book. I mean, who keeps a car 60 years as primary transportation?

FacebookTwitterGoogle+LinkedIn
Photos: After 60 years Grace Braeger is ready to sell her 57 Chevy
Fullscreen 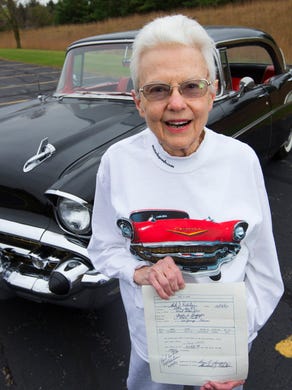 Grace Braeger holds the original bill of sale for her 1957 Chevrolet Bel Air at her residence in West Bend, Wis. It has been her only car since she bought it from a dealer 60 years ago when it was used as a demonstrator. Mark Hoffman / Milwaukee Journal Sentinel
Fullscreen 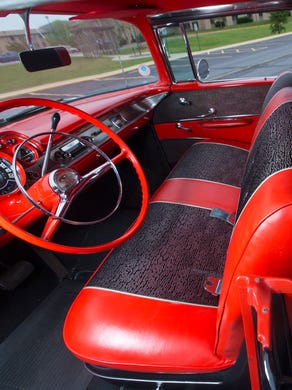 For Grace, it was never about winning trophies. And the car's first and only appearance in a parade was this year.

"I have a  car show every time I drive that car. People compliment me all the time, parking lots, gas stations, on the street as I'm driving. I always say the car craves that attention," she said.

She wants that to continue for someone else. One potential buyer said he wanted to park the Chevy, with its flashy fins and acre of chrome, in a barn somewhere.

"This car doesn't want to go in a barn!" Grace exclaimed. "For me, I want this car out on the street so she can be admired and enjoyed."

Half the car's lifetime ago, Grace had it extensively restored and reupholstered in the original red and black. It has a replacement automatic transmission, but the V8 is virginal. Midas has given her more than 20 mufflers under its lifetime warranty.

Sales prices for a '57 Chevy are all over the board, ranging from $8,500 to $250,000 for the ones I saw for sale on ClassicCars.com. This particular Bel Air comes with a good story and plenty of news coverage, which should boost its desirability.

Sure, Grace wants to get a fair price, but she's very interested in finding the car a good home. 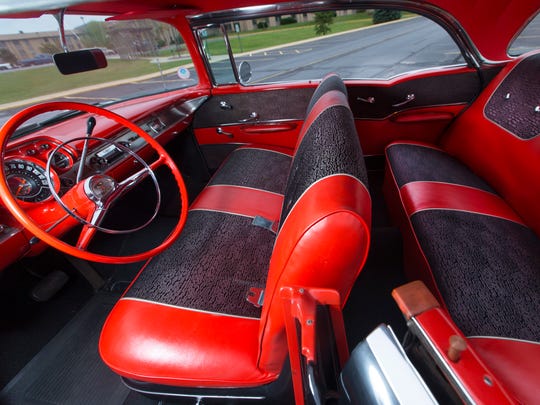 "I have no heirs. I have no children and no extended family that would be interested. So I have to provide for it," she said.

Then she has to pick her next car. She's thinking Chevrolet again. Maybe something in an electric model.

That sounds fine, but my suggestion for her next license plate is MISS MY 57.

Grace welcomes serious inquiries about buying her car. Her email is gracebraeger@gmail.com