Close encounters of the stinging kind are in full force

Close encounters of the stinging kind are in full force

Mark Wick of On The Mark Pest Control sprays chemicals into a wasp nest to get the nesting insects to leave the house. Stinging insects are out in force this time of year, Sept. 27, 2017.(Photo: Doug Raflik/USA TODAY NETWORK-Wisconsin)

A bumper crop of wasps and hornets has kept exterminators busy with calls to remove swarms and nests from awnings, gutters, decks   —  just about any tight spot they can squeeze into and set up house.

Yellow jackets and paper wasps are most abundant and conspicuous throughout the state, says entomologist Patrick Liesch, who runs the Insect Diagnostic Lab at the University of Wisconsin-Madison.

“The cycle begins with a few wasps who start nests from scratch early in spring and they remain relatively calm and go unnoticed,” Liesch said. “By fall, nests reach maximum size and can contain thousands of family members.”

That’s when they come out in force and are aggressive enough to attack anyone that appears to be a threat to their colony or their dwindling food supply.

Warmer winters and not enough winter kill could be the cause for an increase in these insects, said Casey Siewert, from Diamond Pest Control in Waupun. Yellow jackets like to build in cracks in and around house siding, and if they are far enough in, some can even survive the winter.

“Since these insects are cold-blooded they are seeking heat and that’s why they are attracted to buildings, which radiate heat,” Siewert said.

The unpopular pest can produce new generations every seven to 10 days, so homeowners may see a variety of sizes flying about. Juveniles tend to be the workers while the larger adults remain inside the nest.

Mark Wick, owner of On The Mark Pest Control in Fond du Lac, has fielded some 50 calls this season asking him to come take care of an unwelcome nest that has gotten out of control.

Bald-faced hornets, the largest of the species, are also out in numbers, he said, identifiable by their black and white stripes. Another type seen are cicada killer wasps, bright orange in color.

"The first thing I tell people is do not seal up the hole," Wick said. "That could force them to travel inside the house."

Mark Wick of On The Mark Pest Control sprays chemicals into a wasp nest at a home outside Fond du Lac. Nests can contain thousands of the stinging insects this time of year, Sept. 27, 2017. (Photo: Doug Raflik/USA TODAY NETWORK-Wisconsin)

Exterminators, donned in bee suits, inject the nest with chemicals in the form of a dust, aerosol or liquid. Sometimes it takes a few tries to get them all.

"Wasp traps and lures are available commercially, and cans of wasp spray, but these are not effective when dealing with large quantities of these stinging creatures," Wick said.

While wasps have a nasty reputation, they do serve a purpose. As predators, they act as a natural pest control by feeding on caterpillars, crickets and larva of other insects, Liesch said. Some will also go after flower nectar as a source of energy, which promotes pollination.

“So if you have a nest in a far corner of your yard, you’d probably benefit just to leave it alone,” he said.

In just a couple of months, all the buzzing will cease and most of the invasive insects will be dead, either by starvation or from frost.

“The vast majority will be gone, but certain lone female queens who have mated will make it through the winter and start their own colonies next spring,” Liesch said.

There also are more than 500 types of wild or solitary bees, different than honeybees. The females nest alone, and the bees themselves are usually docile within their environment. Bumblebee encounters are the exception, Liesch said, if you get too close to a ground nest. 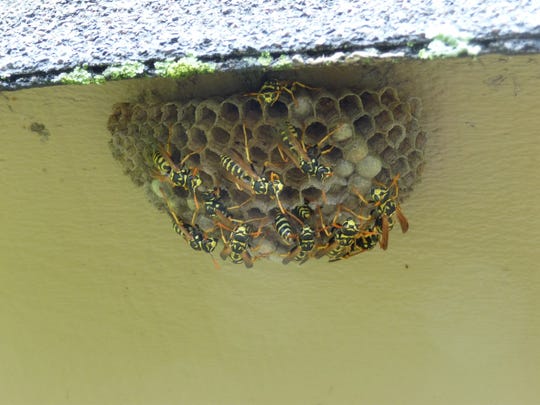 Paper wasps and their nest. (Photo: Courtesy of Carol Shirk)

Varieties of wasps and bees that choose to live underground can be more aggressive, often experienced by people getting an unwelcome surprise while operating lawnmowers or tractors.

An estimated 10 million people between 2001 and 2010 were treated in emergency rooms for various insect bites, including bees and wasps, the National Institutes of Health is reporting.

A routine bee or wasp sting requires no specific treatment, but the first order of business is to remove the stinger, to limit the amount of venom received. The best way to do this is by scraping it off with a fingernail, according to the Centers for Disease Control and Prevention, followed by washing the area with soap and water.

Swelling can be reduced with an icepack and over-the-counter antihistamines, which can also help with itching. Medications such as aspirin or ibuprofen can relieve pain.

Mark Wick of On The Mark Pest Control gets suited up as he prepares to get a wasp nest removed from a house, Sept. 27, 2017. (Photo: Doug Raflik/USA TODAY NETWORK-Wisconsin)

The key to avoiding stings is to steer clear of hives and nests, operate motorized equipment such as lawnmowers with care and avoid swatting at them when they are in the vicinity.

Wisconsin residents can get advice on insects, including identification, by contacting the Insect Diagnostic Lab through their website: labs.russell.wisc.edu/insectlab/.