Algoma Holstein has cameo spot in ‘The 60 Yard Line’ movie

LUXEMBURG — A Holstein from Algoma is surely getting her five minutes of fame. Rather, 30 seconds of fame.

Reaction had a bit part in “The 60 Yard Line’’ the Green Bay Packers-themed movie shot in Green Bay and Ashwaubenon and currently playing at Marcus Theaters’ Green Bay East and Bay Park cinemas in the Green Bay area. “Playing” Mitch the cow in the movie, she appears in the kitchen of a tailgating party house in the shadows of Lambeau Field as a hallucination of lead actor Ryan Churchill.

“The 60 Yard Line’’ is a romantic comedy about crazed Packer fanatic Ben “Zagger’’ Zagowski (Churchill), obsessed with his Green and Gold to the point where he forgoes down payment for his big wedding in favor of purchasing a party house fresh on the market. His fiancé is played by actress Kim Crossman. The plot follows the couple’s ups and downs, mixed in the extended party lifestyle of this house.

Beloit native Churchill and fellow Hollywood actor Nick Greco co-wrote, co-produced and co-star in the true story. The 96-minute movie features former Packers players John Kuhn, Ahman Green and Mark Tauscher and a host of local extras including testimonial from fanatic tailgating fans. The Packers-themed movie also carries an appearance by Randall Park, the father on the television sitcom “Fresh Off the Boat.’’

The DVD is expected to be released just in time for Christmas.

Reaction isn’t a typical spotted dairy cow. She is nearly all black with the exception of white legs. She has half of an hourglass-shaped white spot on her forehead. She has a slight hump on her nose, like a Barbra Streisand, and an unusual underbite. Reaction’s long white legs can only be compared to stockings worn by Kim Kardashian. She is tall for a cow — 6 feet.

And she loves the limelight according to handler Jordan Ebert of Ebert Enterprises, Algoma.

“She did really well, both filming and at the premieres,’’ Ebert said.

The movie’s world premiere was held at the Wisconsin Film Festival on April 2 in Madison. Glittered and wearing a fedora hat, Reaction strutted the red carpet on her nail-polished hoofs before being brought into the theater. She had a Packers hair ribbon tied around her tail.

No accidents, too. It’s not like a dog; you can’t train the animal.

“Cows are going to do, whatever they want to do, at any time,” said Ebert, a 23-year-old Dairy Science graduate from the University of Wisconsin-Madison with a certificate in Agricultural Business Management. 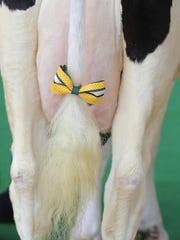 Reaction wore a green-and-gold bow on her tail for the Green Bay premiere of “The 60 Yard Line” at Bay Park Cinema in Ashwaubenon. (Photo: Adam Wesley/USA TODAY NETWORK-Wisconsin)

“We’re pretty lucky,’’ said Ebert. “She must’ve got it out of her system in the trailer ride before or after. Never in front of the people.”

Reaction is pretty laid-back. She is not easily spooked by noises or people, nor flashes of light.

“People could get hurt or the cow could get hurt. It’s the reason why we chose Reaction (to be in the movie),’’ said Ebert. They have no idea why the four-year-old female cow transfigured into a male for the movie.

Reaction is temporarily housed at the Jauquet Farm in Luxemburg. The show cow is currently getting special attention there as a new mom. The Eberts care for 4,200 cows at their Ebert Enterprises in Algoma, host of this year’s Wisconsin Farm Technology Days.

Ebert opens the tailgate of his red pickup truck, offers a seat, and tells the story of Reaction and the tailgating movie.

A casting call for a cow came up at the World Dairy Expo in Madison in 2015. The Eberts develop show cows for competition and other farm events.

“They are comfortable being out and about, and super friendly,” said Ebert.

In the movie, all 1,800 pounds of her was required to walk through a short hallway into a kitchen of the Packers party house. Reaction could not wear a halter (rope harness) around her head. Once in position, in order to keep her from moving, Ebert was stationed underneath her and out of camera range.

“We tied her halter across her front legs and attached the halter ends to each side of the cabinets alongside her. I was holding the halter tight underneath so she couldn’t step forward,” recalled Ebert. At the same time, Ebert was petting her underside to keep her calm. That scene itself demanded an hour to produce.

“It took a couple of takes,’’ he said with a smile. “We were there three hours for filming (nearly two years ago).

Ebert was able to mingle with the cast and ask questions about the movie plot and its timeline. In return, the cast fired back questions about the cow. Jordan and his sister Whitney, a therapeutic recreation student at UW-La Crosse, share the hobby of showing cows since they were youngsters. They are the children of Ebert Enterprises farm owners Randy and Renee Ebert. 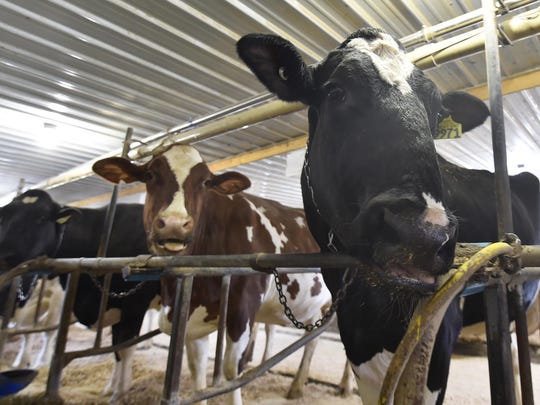 Reaction, right, hams it up for the camera with fellow stallmates at the Jauquet Farm in Luxemburg. After recently calving, Reaction currently resides at the farm, where she can receive more attention. (Photo: Tina M. Gohr/USA TODAY NETWORK-Wisconsin)

The Eberts hosted Farm Technology Days on July 11-13. It drew 20,000 admissions to the Algoma farm under the guidance of nearly 2,000 volunteers. They were the first county in the state to draw this many attendees.

“If you think of it,’’ Ebert said, “there were as many people here in those three days as there are living in the county. Our family and all the committees are very happy of the outcome. All the people made it successful.’’

Reaction won’t be joining the Screen Actors Guild any time soon as there was no payment. “It was just cool and fun, and a great experience,’’ said Ebert.

But they will be ready for a sequel.