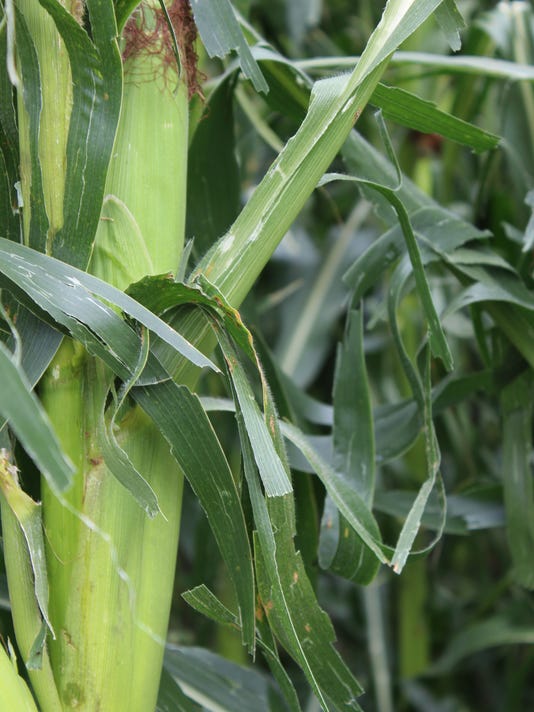 The leaves of these corn plants in a field on Lake Emily Road in Dodge County are in tatters following a thunderstorm on Aug. 10 that dropped quarter-sized hail stones.(Photo: Colleen Kottke/Wisconsin State Farmer)

FOX LAKE - While the harvest of small grains and hay chugged along across the state last week, storms in northern Wisconsin interrupted fieldwork.

An early evening wave of thunderstorms dumped heavy rains and pockets of hail in Fond du Lac, Dodge and Washington counties on Aug. 10. Those farm fields along the county line in northwest Dodge County bore the brunt of the hail storm – leaving behind fields full of corn plants with stripped leaves and soybean plants in tatters.

“One producer living in the Lake Emily Road area said a 150-acre corn field was damaged by the hail storm. Luckily his corn crop was planted in May and was far enough along that it should be OK,” Ortiz-Ribbing said. “His soybean field is another story. He’s looking at a 40 percent yield loss.”

Ortiz Ribbing said other farmers in the vicinity fared even worse.

“One producer told me that he will lose 70 percent of his yield in one badly damaged soybean field,” she said. “One commercial vegetable grower in the area tore out a field of green bean plants that were badly damaged. We’re talking some pretty high value crops.”

According to the Wisconsin Crop Progress and Condition report for the week ending Aug. 13, one Washington County reporter noted that 2 inches of rain fell in under 20 minutes along with marble and golf ball-sized hail and four-inch icicles.

“A mile to our east soybeans were shredded,” the reporter observed.

Ortiz-Ribbing said there are many variables to consider in predicting the impact on production following the Aug. 10 storm.

Because of the wet, cold spring, planting was done in waves across the state as farmers were able to get into fields.

The leaves of these soybean plants in a field on Lake Emily Road in Dodge County are in tatters following a thunderstorm on Aug. 10 that dropped quarter-sized hail stones. (Photo: Colleen Kottke/Wisconsin State Farmer)

Corn plants need lots of photosynthesis going on during pollination and grain fill, she said.

“It’s much better for the plant if the damage occurred while it’s in the milk stage rather than if the plant is tasseling or in the silk stage,” she said. “However, there was a lot of damage to leaves and the plants still need photosynthesis to complete that kernel. Damage during these developmental periods could cause yield loss.”

“Depending on the stage of soybean development, the plant may or may not grow out of it. But if the plant is no longer flowering, it’s not going to produce any more pods to replace those beans that were lost,” she said.