Growers of major vegetable crops in Wisconsin applied a great variety of fungicides, herbicides, and insecticides to protect those crops in 2016 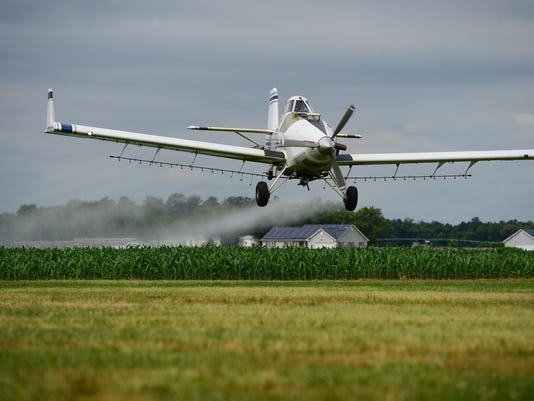 Growers of major vegetable crops in Wisconsin applied a great variety of fungicides, herbicides, and insecticides to protect those crops in 2016.(Photo: Megan Raymond)

MADISON – Growers of major vegetable crops in Wisconsin applied a great variety of fungicides, herbicides, and insecticides to protect those crops in 2016, according to a recent report by the state's field office of the National Agricultural Statistics Service.

A total of 32,400 pounds of atrazine was applied to 91 percent of the sweet corn for processing acres. For active ingredient volume, the group of S-metolachlor products led the way with 44,200 pounds that were applied on 79 percent of the acres.

The only insecticides listed for sweet corn for processing were the commercial products Warrior II and Silencer. A total of 100 pounds of active ingredient was applied on 7 percent of the acres in 2016.

Six categories of herbicides were listed as the only chemical treatment on green peas for processing. However, the summary report stated that insecticides were applied on 13 percent of the acres while no data was given for fungicide use in order to avoid disclosing data for individual operations.

Among the 97 percent of green peas acres treated with at least one herbicide, the commercial product Basagran had the top use of 6,400 active ingredient pounds. The pendimethalin category (Prowl products) followed with 5,500 pounds.

The report pointed out that 100 percent of the carrots for processing had herbicide, fungicide, and insecticide applications. The chlorothalonil type fungicides accounted for 57,900 pounds of applied product while the totals were 5,200 pounds for three categories of herbicides and 100 pounds for Asana XL insecticide.

All of the cabbage heading to fresh markets was treated with an insecticide. To avoid disclosing data for individual operations, no numbers were given for cucumbers raised for processing and for fungicide and herbicide applications on fresh market cabbage.

The report also noted that Wisconsin was among 19 states in which growers were surveyed for their pest management protocols. The survey tracked methods and techniques for pest avoidance, monitoring, prevention, and suppression.

As most of these vegetable crops are still in various growing stages before being harvested in the coming weeks, no statistics on chemical use for 2017 are available.

However, it's likely that there's not much change from year to year because the processors who contract with farmers to grow those crops need to carry out certain preventive practices in order to protect the quality of the harvest, according to Loretta Ortiz-Ribbing, the Extension Service crops and soils agent for Fond du lac and Dodge counties – both of which have contracted acres for some of those crops.

If there is any significant difference for 2017, it would be the likelihood for increased use of fungicides because of the frequent periods of heavy rain during the growing season, Ortiz-Ribbing observed.

She noted that the pest scouting and other crop management practices for the contracted vegetable crops are made by the fieldmen and other officials of the vegetable processing companies – not by the farmer who contracted for the crop and with little or no input today from local Extension Service agents.

In line, however, with what the Extension Service advises for all crop production, is the emphasis on crop rotation to control plant diseases and to suppress pests – a practice commonly referred to as integrated pest management, Ortiz-Ribbing pointed out.

One particular concern with sweet corn is infestation by corn earworms. Based on latest weekly Pest Bulletin reports by the Department of Agriculture, Trade and Consumer Protection issued in early August, counts of the migrant corn earworm moths were quite low for the first four weeks of monitoring this summer.

On the other hand, trapping sites in Fond du Lac and Dodge counties registered the state's highest two counts of the migrant western bean cutworm moths in early August.

That insect is mostly a concern for field corn but it can also infest sweet corn.