A inmate works on the farms as part of the Horticulture Program at Oak Hill Correctional Institution in Oregon, WI.(Photo: SAIYNA BASHIR/ AP)

OREGON, WI (AP) - Jason Garlynd walked through a quarter-acre vegetable garden on a 90-degree day last week, pointing out varieties of lettuce and expressing hopes for the recovery of a strawberry crop after a turkey attack. He chatted with workers sitting on overturned buckets to pull weeds.

Garlynd called out to one, asking how long he had been there. Two years?

The worker leaned on his hoe.

"Second and some change," he said lazily.

The only thing keeping a visitor from mistaking the scene from a typical south-central Wisconsin farm was an imposing fence nearby, The Capital Times reported. The farmers pulling weeds and tending to the crops are inmates at Oakhill Correctional Institution.

Oakhill is a minimum-security prison in Oregon, WI, and Garlynd is the horticulture instructor. He gives inmates the opportunity to earn college credit and develop practical skills by working on the farm. In return, the inmates produce an impressive amount of flowers and food that supply the prison, with extras donated to kids and food pantries around the community.

About 700 inmates live in the facility's two-story limestone buildings, originally a "school for wayward girls." Most of them stay for about 8 months and Paul Ninnemann, the deputy warden, wants to take advantage of that short time.

Studies have shown that education and vocational training makes prisoners more likely to find jobs and less likely to re-offend and find themselves back in prison.

Oakhill offers 15-week vocational programs that are accredited through Madison Area Technical College. Inmates can meet the minimum vocational requirements for the Department of Corrections, or they can pursue a 400-hour certificate in horticultural training. If they want to go on even further, they can participate in the recently reinstated apprenticeship program, which requires 6,000 hours of field experience.

Horticulture training is a marketable skill in a world with an increasing pool of ecologically sustainable and "green" jobs, Garlynd said.

Running a horticulture program at a prison comes with challenges. The sharp tools needed for gardening are carefully numbered and organized on a shadow board in a locked closet so they can be accounted for at the end of every class. Garlynd is teaching to a wide variety of education levels, including inmates who dropped out of school long ago. And Garlynd doesn't hold back on the book work.

Kayron Fortune, 31, has been at Oakhill for over a year and took Garlynd's classes.

"This is the guy that gave us the gray hair," he said, smiling, as Garlynd approached.

Fortune spent the four months of the program studying for hours. A high-school dropout who later earned a High School Equivalency Diploma, he didn't think he was going to make it through the program. But he dug deep and pushed harder, he said.

"I feel that I accomplished something, that I can actually accomplish anything," he said.

In this June 15, 2017 photo, inmate Kayron Fortune poses inside the greenhouse at Oak Hill Correctional Institution in Oregon, WI. The prison's horticulture program cultivates relationships between inmates and the community. (Photo: SAIYNA BASHIR/AP)

Many of his students are high on the spectrum of creativity, which is probably why they've run into problems in their lives, Garlynd said. They weren't the type of kids to sit in place and do their work. Garlynd tries to accommodate this creativity, but explains to the class that learning the materials and harsh grading are necessities.

"Sometimes I thought I had did pretty good, but he would hand it back saying, 'You could have done a lot better,'" Thomas, a former inmate, said laughing.

As Fortune said, Garlynd is a "wealth of knowledge" and can "break down every plant for you down to its Latin name." But Garland's personality makes a massive amount of information digestible, Fortune said.

Fortune hopes to use all this knowledge to start a landscaping business once he's released. Plus, his grandmother has a garden, and he has always wanted to help her with it.

Garlynd cites the Quran and Old Testament in casual conversation. He has his students consider the patriarchy as he teaches them about the Linnaean method of classifying animals, asking them whether it really wouldn't be more appropriate to call it the "queendom," rather than "kingdom." The students form a social contract at the beginning of the class: no sexism, racism or speciesism. 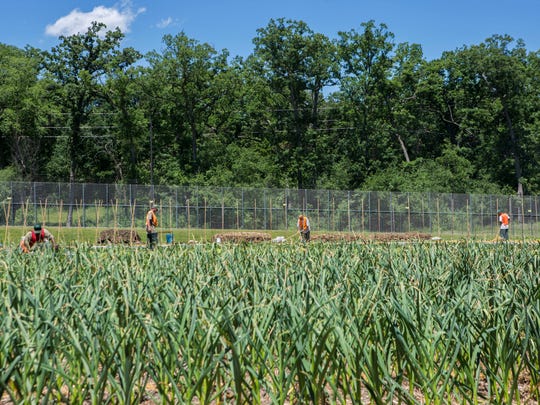 Inmates work on the farms as part of the Horticulture Program at Oak Hill Correctional Institution in Oregon, WI. (Photo: SAIYNA BASHIR/AP)

Throughout it all, his emphasis is on restorative justice. Garlynd sees the prison as a "temporary waystation" for the inmates. While they're here, he wants to use ecology to teach them about interdependence, showing them that they are a valuable part of the community. In an institution like Oakhill, Garlynd said, emotions tend to be "buried pretty deeply," so he uses metaphors like composting.

"You use what you would assume is waste and debris and rubbish, and transform it into the vital, richest material for bringing beauty and abundance out of the soil," he said.

Garlynd's passion fuels an impressive amount of product: over 13,000 pounds of food a year.

That's over 1,000 pounds of lettuce and 1,500 garlic bulbs. At peak, workers bring in a half ton of tomatoes a day. And last year, 500 pounds of strawberries were enough to top the shortcake served to the inmates on the Fourth of July.

"That's a ridiculous number of plants to grow in a space this small," Garlynd said.

Much of it is flash-frozen, so food can be pulled out in February and not lose any of its nutritional content, Garlynd said. 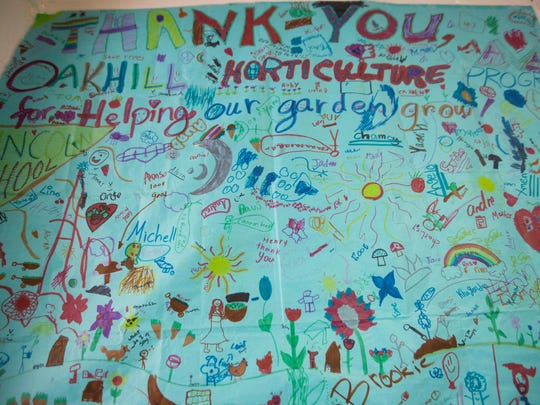 A poster made by school children hangs in classroom for the horticulture program at Oak Hill Correctional Institution in Oregon, WI. (Photo: SAIYNA BASHIR/ AP)

The greenhouses and garden also grow some 50,000 seedlings, 15,000 of which are donated to the community through the Oakhill Kids Garden Network. There are 37 community and school gardens around Dane County that receive the seedlings.

At an open house last year, food from the Allis garden fed over 400 people, with kale salad, coleslaw, pesto and salsa created from fresh garden ingredients. Every class can plant, learn from and enjoy the fresh air of the garden, Troyer-Shank said. Before Oakhill, the school maintained a smaller garden and had to pay for all the plants itself.

"Oh my gosh, flowering and gardening has just taken off at this school," she said. "It just seems like such a wonderful blessing."

That gratefulness motivates the inmates and connects them to the community, Garlynd said. Pictures and thank you cards from kids are posted around the horticulture classroom.

"Thank you Oakhill Horticulture for helping our garden grow," one poster says.