MADISON - As the 88th Wisconsin FFA Convention drew to a close, members of the 2016-17 Wisconsin state officer team were ready to close the chapter on a year spent promoting FFA and serving as advocates for the state's agriculture industry.

During the final session of the convention in one of their last order of business, fellow out-going officers elected Ballmer to serve as the State President of the 2017-18 Officer team. Ballmer had previously served as one of the State FFA Vice Presidents. 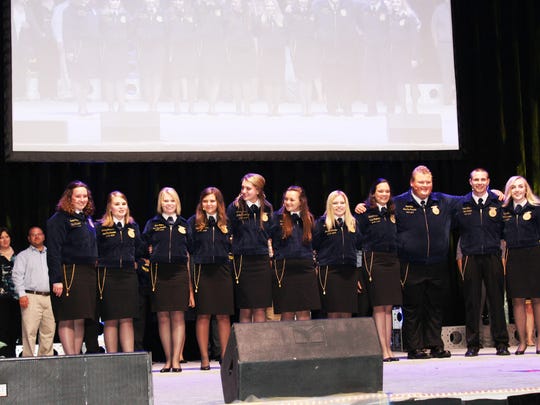 Ciera Ballmer (sixth from the right) served as State Vice President for the 2016-17 officer team. She has been chosen to lead the 2017-18 team as President. (Photo: Colleen Kottke)

The Clinton FFA member says she is extremely humbled and excited to be elected by her peers to lead the new officer team.

"It really is an honor to be able to serve Wisconsin FFA another year, and I am looking forward to another great year with Wisconsin FFA," said Ballmer.

As a veteran of the state FFA officer team, Ballmer is no stranger to long days and time spent travling. As a state FFA officer, team members travel over 10,000 miles during the year, meeting FFA members across the state and the nation along with meeting with leaders in government, education, business and agriculture. 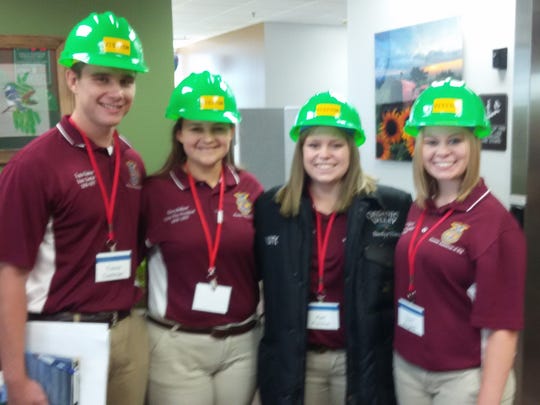 In addition to her duties as the top officer in the state FFA organization, Ballmer also has a full plate while pursuing a degree in Dairy Science and Life Sciences Communication at the University of Wisconsin-Madison.

Upon graduation she hopes to land a job as an Agricultural Educator and FFA Advisor.

In the meantime as president of the state FFA officer team, she hopes to work hand in hand with her 'teammates' to continue their role as advocates for Wisconsin FFA and the agricultural industry.

"Specifically, I hope to continue increasing our membership and hit a 39 year membership high, continue to increase engagement with members and supporters through social media, and to continue to show people the diversity of opportunities in Wisconsin FFA including FFA Band and Choir to Agriscience research projects," Ballmer said. 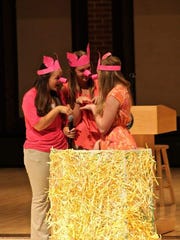 She is also active at the collegiate level as a member of the Association of Women in Agriculture, National Agri-Marketing Association, Collegiate FFA, Collegiate Farm Bureau and Ag Day on Campus.

Ballmer sums up her year as a state officer as "absolutely amazing".

"One thing never stopped grabbing my attention, and that was how amazing the Wisconsin FFA members are," she said. "Every time an FFA member explained to me the complexity of their unique Supervised Agricultural Experience or their amazing future plans in the agricultural industry, I was always impressed!"

Ciera Ballmer (second from left) has enjoyed meeting FFA members from the state and nation as a member of the State FFA Officer team . (Photo: Submitted)

In her new leadership role, Ballmer says the best advice she can give to her new officer team is the familiar saying: Bloom where you are planted.

"As agriculturalists, we can all relate and learn something from this quote, and that is: whatever situations you are put in, you where planted there for a reason, and that is to make the best of the situation, take advantage of the opportunity, and to bloom where you are planted," she said.

Ballmer is the daughter of Ronna Morton Ballmer and the late Jerry Ballmer.