Time spent in FFA a 'chance of a lifetime'

Time spent in FFA a 'chance of a lifetime'

We’re all a little nerdy in our own way, whether it’s books or movies, games or music. Growing up in my small town, there wasn’t an abundance of farm kids, so I was an “agriculture nerd.”

My desires brought me into the agriculture room, studying dairy cattle evaluation, calculating feed rations and investigating the anatomy of ruminants. More importantly, my desires introduced me to a whole new family — my FFA family.

I served as the 2014-15 Wisconsin State Reporter, representing the Lomira FFA Chapter in Section 10. Spending countless days on the road, putting on miles with teammates and by myself as we traveled to businesses that support the FFA as well as the chapters in our section.

Kati Kindshuh (middle row, far right) was elected to serve with 10 other FFA members from across the state on the Wisconsin State Officer team. While they are brought together by a blue jacket, their time together has forged friendships that will last over the years. (Photo: Courtesy of John H Keel Photography)

I’ll never forget the laughs, the late nights planning workshops and the occasional nap in the car with my teammates as they became my ten closest friends. That year is one that I’ll never forget, as the entire Wisconsin FFA became my family.

The FFA became a place of confidence, growth, adventure and so much more. Through speaking contests I was pushed to research agricultural topics, conferences made me think outside of the box and it also allowed me to travel and see parts of the world I would’ve otherwise only dreamt of visiting.

My time spent as a state officer allowed me to connect with dozens of other state officers around the country at State President’s Conference held in Washington D.C. and again at the National FFA Convention and Expo. It doesn’t seem possible, but over the course of a few short days, I began to feel as if I’d known these people my entire life as we shared stories of farming back home and life in “our neck of the woods.” Every small farm town, wherever corn grows and FFA members meet, have more in common than you’d think.

“Every small farm town, wherever corn grows and FFA members meet, have more in common than you’d think.”

As I’ve gotten older and hung up my blue corduroy, I cannot help but be grateful for the lessons learned while in that jacket. It’s taught me a firm handshake, the ability to speak confidently, and it has allowed me to grow fearlessly. It’s almost as if each time I zipped my jacket, I stood a little taller, sat a little straighter and smiled a little bigger.

I had the chance of a lifetime to be loaned an FFA jacket my freshman year of high school so I could attend a leadership conference, now nearly a decade later, a handful with the words “Association” hang in my closet. That one moment in time put me on a path of excitement for agriculture, unparalleled to any other moment in my life.

I might still be an “agriculture nerd” as I love to learn about genetics, dairy cattle reproduction and so much more, but I have found a group of people who share my nerdiness in agriculture. My FFA jacket has a story of its own on a back road less traveled, and it has made all the difference. 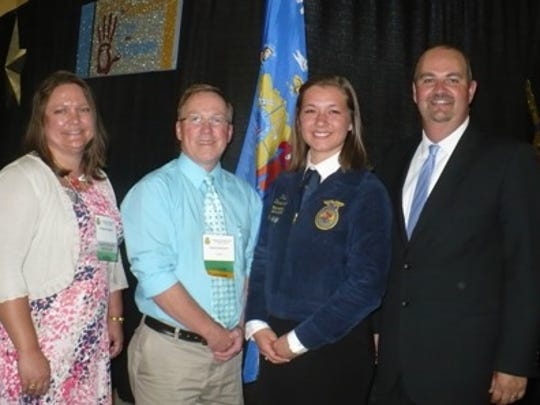 Kati Kindschuh is joined by her former Lomira FFA Advisor Dan Robinson (second from left) along with Betsy Wagner and Jeff Hicken. Kindshuh says she 'couldn't imagine FFA without Mr. Robinson in it." (Photo: Submitted)