Warmer-than-usual winter and a cold, wet spring have caused from 50 percent to 100 percent of alfalfa crops to fail in Manitowoc County. 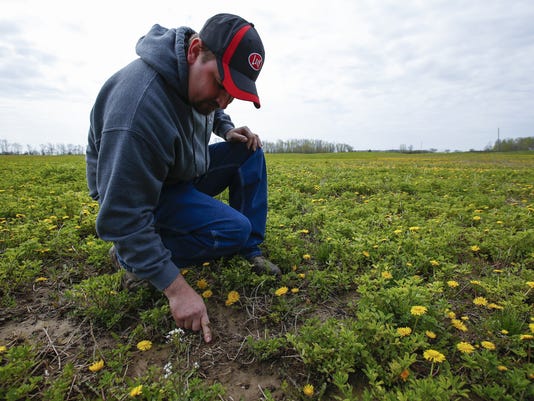 MANITOWOC - Spring usually is a time of optimism and renewal for farmers and those who work with the earth.

This is the time farmers spend long hours tilling fields and planning the season's crops. Although that is still the case in Manitowoc County, this spring also is a time of worry and frustration for many, as a warmer-than-usual winter and a cold, wet spring have caused from 50 percent to 100 percent of alfalfa crops to fail.

Scott Gunderson, agriculture specialist for the University of Wisconsin Extension in Manitowoc County, said at least 10,000 of the 18,000 acres of alfalfa plantings in the county have failed. Fields lay bare before weeds and dandelions started to take over. Many may struggle to find feed for their dairy cows in future months and likely will spend more to buy forage for their herds.

Yellow edges of the alfalfa leaf are a result frost damage from late in the spring season Thursday in Manitowoc. (Photo: Josh Clark/USA TODAY NETWORK-Wisconsin)

"It was a brutal winter for alfalfa and winter wheat," Gunderson said. "We had a very, very wet fall, and in winter, we didn't get the continuous snow cover we want."

Ideally, plants will incubate under a steady 6-8 inches of snow throughout the cold of winter. This past winter, northeastern Wisconsin experiences several melts and sleet fall. In some cases, sleet melted and traveled to lower parts of fields, where it melted and formed harmful sheets of ice on the tops of plants.

February temperatures jumped into the 60s and even 70s, which encouraged plants to start growing.

"Then, we went from 60s to 20s almost immediately," Gunderson said. "That created winter kill for plants." 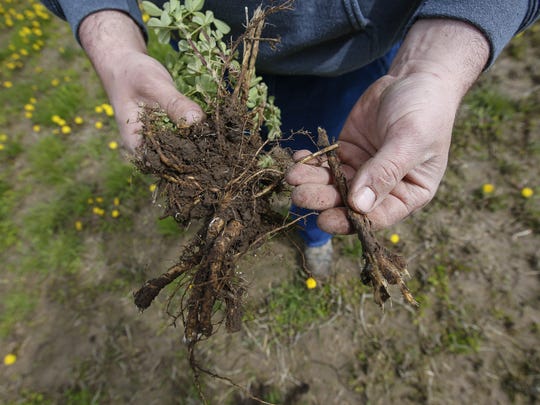 Tyler Wagner shows the difference between a healthy alfalfa root on the left and a damaged dead root on the right. (Photo: Josh Clark/USA TODAY NETWORK-Wisconsin)

Spring has not made things better. As of May 11, when USA TODAY NETWORK-Wisconsin spoke with Gunderson, weather has been cold and extremely wet, leading to spring injury to crops.

"Plants are starting to rot," he said, and some farmers have lost all or nearly all of their alfalfa.

"It looks like the fields have been tilled," he said. "We're still cold, we're still wet and water logged. Farmers are having a hard time getting in."

Alfalfa is one of two main forage foods for cows; the other is corn silage. Cattle feed is composed of forages (grazing feeds such as grass or hay), grains and proteins.

Manitowoc County dairy farmer Tyler Wagner estimates his family farm lost 75 percent to 80 percent of its alfalfa plants over winter, or 140 of 200-220 acres. Plants pull easily from the dirt, their roots completely rotted, so they're pulling them out.

His farm will sow cover crops such as peas and oats to grow quickly to serve as some feed for the 240-cow herd.

"I also have enough carryover from last year," Wagner said. "I'll probably go to corn silage for cows, too. We're also keeping our eye on prices and where you can buy from other places."

Dandelions ravage the alfalfa fields because of the lack of competition from the alfalfa crop in Manitowoc. (Photo: Josh Clark/USA TODAY NETWORK-Wisconsin)

Many farmers were able to store hay because last year's growing season was ideal, Gunderson said.

"Farmers are resourceful," he said. "They did a good job of storing after a tremendous year."

Burn rates, or the rate farmers will go through stored hay, varies from farm to farm.

"Some have enough to make it through the summer," Gunderson said. "Others have only a few months of what they need."

So far, hay prices haven't jumped dramatically, but that could change if reserves grow tight.

Suppliers in Nebraska or the Dakotas also experienced inconsistent winter weather and expect to have less to sell, Gunderson said. Some farmers in Manitowoc County are approaching those who raise alfalfa as crops to cover their own diminished yield.

“Hay prices have increased lately," Gunderson said. "Grade 1 hay as reported in the UW-Extension Hay Market Report increased from $119 per ton on April 24 to $130 per ton on May 8."

Farmers also may use by-products from other industries, including the parts of grains not used by distillers, to replace some of their herd's diet.

At a recent panel discussion, Gunderson said several experts said farmers are borrowing more money to keep their farms going, as milk prices are not keeping up with inflationary costs, and now they will have the added cost of feed.

The nature of farmers is to accept the challenges and continue on, he said.

"They want to be out planting, they want to do tillage," he said. "Farmers are resilient."