Wisconsin corn and soybean farmers are on pace to bring in the largest harvest on record. 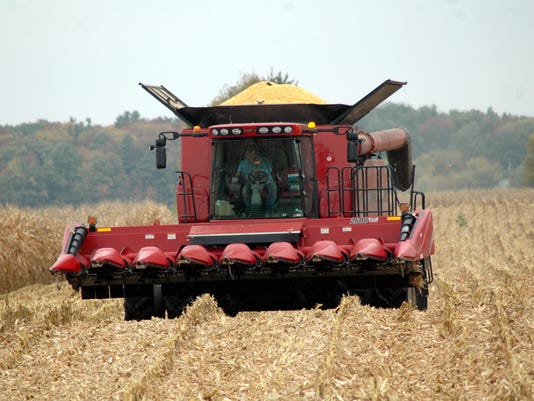 Wisconsin corn yields are coming in over the top this year, breaking records for total production and bushels per acre.(Photo: Carole Curtis)

Madison — Wisconsin corn and soybean farmers are on pace to bring in the largest harvest on record.

According to the USDA Crop Production Report released Nov. 9, the state's 3.10 million acres of corn is now expected to produce 558 million bushels, up 2 percent from the October forecast and up 13 percent from 2015 production.

If realized, this will be a new record high corn production, the report said, topping the old record of 515 million bushels set in 2011.

If realized, this will be a new record high yield, the report noted, topping the record set last year of 164.0 bushels per acre.

Production for the state's 1.95 million acres of soybeans is also expected to break records. The harvest is forecast at 107 million bushels, breaking the old record of 92.6 million bushels set last year.  The yield forecast on Nov. 1 set expectations at 55.0 bushels per acre, 5.5 bushels above 2015, and up 3.0 from the October forecast.

If realized, the yield will be 4.5 bushels per acre above the 2010 record yield.

The next production estimates will be published in the Crop Production – 2016 Summary report, which will be released Jan. 12, 2017.