WWA members know that even the most safety-conscious families sometimes find out accidents can still happen.

During the annual Wisconsin Women for Agriculture meeting in Randolph, Colleen Kottke, a Fond du Lac County farmer and a farm reporter; Pearl Macheel, Randolph EMS Coordinator; and Joanne Goodlaxson, a WWA member from Waupun, shared ideas on being better prepared for emergencies on the farm.(Photo: Gloria Hafemeister)

Everyone has a responsibility for safety on the farm and in the home.

That’s an issue that has been near and dear to the members of the Wisconsin Women for Agriculture since the organization began more than 40 years ago.

When they do, the outcome can be much better if people know how to respond, stay calm and have given the matter some thought in advance.

The annual WWA conference, held in Randolph this week, featured a discussion about real-life experiences — near misses — and things farm families can do to be better prepared when accidents occur.

The meeting was held at Feil Supper Club in Randolph and owner Terry Feil described how a bystander saved his life after he was involved in a serious auto accident while in college.

After the accident, two teachers who heard the crash in front of their apartment ran out to see if they could help.

While one of the men called the rescue squad Lee Born checked on the welfare of the victims. The driver was badly bruised, but Feil was covered with blood that was coming from his severed artery. While another bystander held a flashlight, Born reached into the car and pinched off the artery until the ambulance arrived.

“I know I would have bled to death before help arrived had he not done that,” Feil said.

Born later told Feil he knew what to do because he remembered learning it in school and then talking about it when he taught a health class. Born later received a citation from the American Red Cross commending him for his quick response. It was signed by President Ronald Reagan. He was also honored in a ceremony at the governor’s office for his heroism.

Looking back on the incident, Feil said he believes it is a natural thing for people to panic when they see blood, and they may think they don’t know what to do because they do not have medical training.  But he says he would not be alive today if Born had not stayed calm and did what he felt he had to do.

Some WWA members shared experiences of “near misses” on the farm.  When an accident happens, it seems like an eternity before help arrives. Even when it is only five minutes, the person waiting with a victim feels pretty helpless.

Colleen Kottke, associate editor of the Wisconsin State Farmer, shared her family’s personal experience with a near miss.

She pointed out that as a farm reporter, she writes far too many stories about farm accidents.

“The stories are heart-wrenching, and the real tragedy is that most of these events could have been avoided had farmers taken a moment to put safety first," Kottke said.

Even when people think they are being careful, accidents can still happen, she said. Usually they are caused by something the victim never thought could happen.

Kottke described her husband’s accident back in 2007, noting he was very fortunate he only ended up with a very badly bruised leg.

She learned of his accident when a co-worker called to tell her that the voice on the scanner said an ambulance was being sent to her farm and that they were told to go back to the blue silo.

Her husband, who was also a breeder for East Central-Select Sires, had gone home for lunch and decided to fill some feed wagons for the cows while he was there.

Standing at the bottom of a 12-foot, portable, belt-driven elevator, he turned on the Harvestore unloader and began running silage into the wagon.

Feed kept jamming up at the bottom, and he attempted to step over the elevator, but a strap on his boot caught on the moving elevator, and he rode to the top where he stopped, suspended by one leg over the nearly filled wagon.

Unable to pull himself free, he waited (for what probably seemed like eternity) until the belt burned itself out.

“That accident would have been so much worse if it had been powered by a PTO," Kottke said. "Nothing stops a power takeoff.”

She said things worked in his favor. Normally he would not have had his phone with him (he would have left it in his vehicle), but he had just charged it and stuck it in his pocket. She also said it was fortunate it did not slip out of his shirt pocket while he hung from the elevator.

Another thing that saved him was the new pair of pants he was wearing.

“I bought them for him because they were known to be very durable," Kottke said. "They were made out of the same stuff a fire hose is made of. The tough material kept the dirty metal paddles from cutting into his skin. They did not tear so he remained suspended until help arrived.

“The paramedics told me that had he been a smaller-built man, the pressure from the equipment would have likely snapped his bones. They also said something really chilling. They said, ‘We don’t often have a good outcome when we’re called to a farm accident.’”

Randolph EMS Coordinator Pearl McCheel was raised on a farm and is also married to a farmer. She has been with the EMS for 27 years.

She said in the earlier years, most farm accidents involved tractor rollovers. There were also no cellphones, so often farmers who were injured out in a field had no way of getting help.

Now with farms getting bigger, she sees accidents involving skid steers, manure pits and many other things.

“Many farms today have employees, so it is more important than ever to have the farm address posted near the phone or where employees know where it is," McCheel said. "They don’t always know the address.

“Also, if there are any detours on the road leading to your farm, tell the dispatcher on the 911 call. Also tell them where on the farm to find the victim. If it’s in a field, explain where and then get someone out to the road to flag them in.”

She said it is also important to describe what happened. Entanglements and serious accidents will require getting a victim to a trauma center quickly, and often that means calling flight for life.

If a victim is having a breathing problem, make sure to get them their inhaler or medicine. If it’s an allergic reaction, help them with the Epipen if they have one, and let the first responders know when it was used. If there are symptoms of a heart attack, give chewable baby aspirin. If the signs indicate a possible stroke, do not give aspirin. If a victim is having a diabetic incident give him juice or soda.

“If you have employees on your farm, you need to know if they are diabetic,” McCheel said.

She also pointed to the importance of calling 911 immediately with any health issue or accident.

“Don’t do like so many people do, and call a family member first,” she said. “In instances like a stroke or heart attack, the sooner they can get help, the better the outcome will be.” 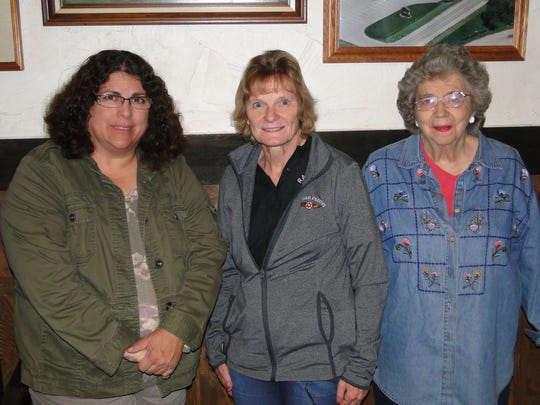 During the annual Wisconsin Women for Agriculture meeting in Randolph, Colleen Kottke, a Fond du Lac County farmer and a farm reporter; Pearl Macheel, Randolph EMS Coordinator; and Joanne Goodlaxson, a WWA member from Waupun, shared ideas on being better prepared for emergencies on the farm. (Photo: Gloria Hafemeister)