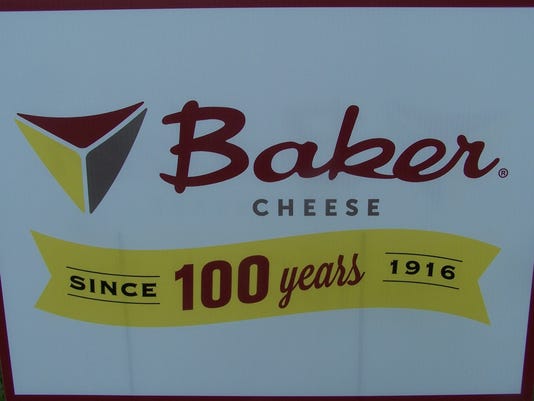 Signs proclaiming the 100th anniversary of Baker Cheese greeted the approximately 500 attendees at a celebration on Sept. 17.(Photo: Ray Mueller)

A series of innovations over 100 years during four generations of family ownership and management have made Baker Cheese one of the top three manufacturers of string cheese in the world.

In a tent set up on the grounds, event attendees were invited to review the pictorial and text displays illustrating the history of the family that has operated a cheese plant at the same site near the intersection of county highways G and T about six miles south of St. Cloud.

A 144-page book, titled “Baker Cheese: The Story of a Wisconsin Cheesemaker Family” and prepared for the occasion, detailed the family history, starting in 1829 with ancestors coming from the European country of Luxembourg, establishing themselves in New York and then Wisconsin.

It was in 1910 that Frank Baker, at age 16, began a cheesemaking apprenticeship at the Winkler Cheese Factory at Plymouth in neighboring Sheboygan County. Six years later, he obtained his cheesemaker license, marking the unofficial start of Baker Cheese on June 22, 1916.

Baker then purchased an existing 1,500 square foot cheese factory in the town of Forest. During the early days of production at the site which has had multiple expansions in the subsequent 100 years, the daily volume of Cheddar cheese production was 300 pounds and the annual intake of milk was about 1 million pounds. One of Frank Baker's innovations was in becoming an early user of the cream separator.

A family of milk silos accommodates the intake for the 1.95 million pounds of milk from about 110 shippers that is processed into string cheese per working day at Baker Cheese in Fond du Lac County. (Photo: Ray Mueller)

By 1956, when Frank's son Francis had joined the family business, the daily cheese production volume had reached 3,300 pounds and the annual milk intake hit 11 million pounds. With the changes in market conditions, consumer tastes and the popularity of pizza, Baker Cheese began to switch from Cheddar to the production of mozzarella cheese in the 1960s.

By 2004, Baker Cheese discontinued the production of mozzarella and concentrated fully on developing numerous varieties and flavors of string cheese, including smoked. In 1979, string cheese had accounted for 2 percent of Baker's production volume.

For 2016, the company is projecting a daily average production of 169,000 pounds of string cheese during its five-day work week, resulting in an annual total of 44.1 million pounds or 762 million cheese sticks.

Under Baker's own label and both private and national label brands, the company's string cheese is available in all 50 states, China, Canada, Mexico, Vietnam, South Korea, Saudi Arabia and Puerto Rico.

With its 300 employees, Baker Cheese prides itself on making “100 percent natural cheese” and doing so within 48 hours of receiving milk from about 110 area dairy farms. Those farms in Fond du Lac, Sheboygan, Calumet, Winnebago, Manitowoc, Dodge, and Washington counties — all within about 50 miles of the plant — are expected to supply 487.6 million pounds of milk to the plant during 2016.

Another indication of Baker's growth was the increase in plant space from the original 1,500 square feet to 5,100 square feet in 1956 and 93,006 square feet today. A major project in 2015 was the construction of a wastewater management plant on the site.

A retail store that opened in 1986 sells about 100,000 pounds of cheese per year. In addition to the string cheese, it also features more than 100 cheese varieties from other manufacturers throughout Wisconsin. Store hours are 9 a.m. to 5 p.m. Monday through Friday and 9 a.m. to 1 p.m.Saturdays.

When Baker Cheese held a 75th anniversary celebration on August 24 in 1991, Francis Baker credited the company's success to its history of family ownership and management, its market-driven business philosophy, and frequent refinement of its production techniques.

Throughout its history, Baker Cheese has often earned top placements for its entries in numerous cheese contests. That includes the gold medal for string cheese in the 2015 World Cheese Championship. To today's customers, the company that is headed by fourth generation family member Brian Baker promises the best in “freshness, quality and service.”

With full confidence, third generation family member and former company president Dick Baker invited all attendees at this year's 100th anniversary observance to mark their calendars for a 125th anniversary celebration on Saturday, Sept. 15, in 2041.