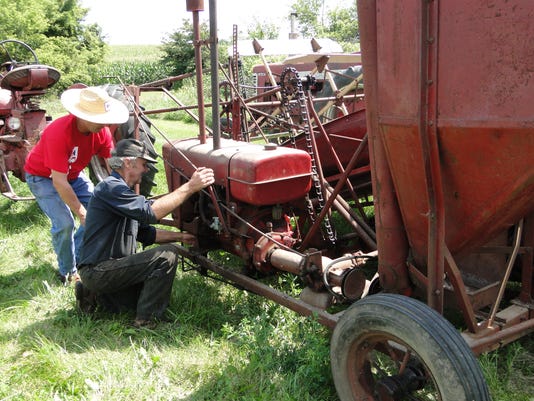 Aaron Gettleman, Ashippun, checks the engine on his McCormick Deering 52.R combine before heading to the field to harvest oats along with other members of the Ixonia Vintage Tractor Expo club last week at Tom Triplett’s farm north of Watertown. His was one of three antique combines harvesting the oats.(Photo: Gloria Hafemeister)

Few farmers raise oats anymore, and even fewer harvest those oats with grain binders and threshing machines or with vintage combines.

The grain bundles are in storage and will be threshed during the Harneschfeger Park Fall Festival in late September in southern Dodge County.

Members brought three combines to the field to harvest the remainder of the oats. One of the more unique pieces was a 52-R combine that has its own cub engine.

Then when everything appeared in good order, Gettleman turned the hand-crank to start the engine. The quiet motor purred as he hopped on his Farmall tractor to pull the 64-year-old machine through the field.

Two other old-time tractors and combines joined him in the field. Both of these were operated by the power takeoff on the tractors pulling them.

While the combines boast different names, all three are a part of a company that today is known as Case IH.

As long ago as 1910, there were 56 companies that claimed to be in the tractor business.

The McCormick “Farmall” tractor was born in 1919, and it is still considered one of the first all-purpose tractors that were affordable and good for many tasks on the farm.

McCormick and Deering were originally bitter competitors on the world market, but eventually, both companies saw the advantages of combining, and they completed a merger in 1903. By 1910, the newly merged company, IHC equipment, was selling farm equipment under a variety of brand names all around the world.

Case IH was formed in 1986 with the merger of Case and IHC.

Members of the club who collect a variety of brands of tractors and other pieces of farm equipment not only enjoy restoring these pieces to workable order, but they also enjoy sharing the story behind each piece.

The club hosts a show each year at Ixonia Firemen’s Park, and they also do charity benefits by driving their tractors long distances to raise funds.

The original plan of the Ixonia club was to completely harvest all of the oats during a special harvesting event on the Triplett farm. Rain forced the postponement of the event, and when they completed the harvest with the combines, they decided more people could enjoy learning about the old-fashioned way of harvesting oats by watching the threshing demonstrations at Harneschfeger Park.

The club plans to take an active role in this year’s event, demonstrating a variety of old-time farming methods.

Harnischfeger Park, 132 acres, is located along the Rock River in the town of Lebanon about 1 mile west of Ashippun and 8 miles east of Watertown.

A variety of terrain, vegetation and facilities provide park visitors with a multitude of recreational opportunities in a scenic setting. The fall festival is a way to let people know what the park has to offer.

It is sponsored by the Dodge County Friends of the Parks.

That organization has been working to make improvement in all of the county’s parks. At Harnischfeger, one of the projects has been to restore the barn and homestead on the original farm, using it to house a variety of antique pieces of farm equipment that have been acquired by the group.

The Fall Festival goes from 8 a.m. to 5 p.m. Sept. 24, beginning with a pancake breakfast. There will also be a Buckskinner rendezvous, wagon rides, hiking and a variety of other activities and demonstrations.