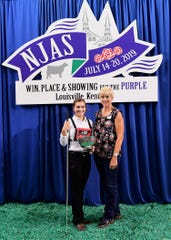 There is no higher honor as a junior Angus member than to be be named champion showman at the National Junior Angus Show (NJAS). This year, Grace Link from Deerfield, Wisconsin, joined that elite group.

“This was the cap on top of my show career,” Link said. “This was probably the last showmanship contest I’ll participate in, and I want to congratulate all of the other participants, as well as thank my family for everything they have done for me.”

Many junior Angus members from across the country dream about capturing the title of Champion Showman at NJAS. Simply getting selected to represent your home state is no small feat, let alone placing in the once-in-a-lifetime contest.The preliminary round consisted of four heats on July 18, where the top 15 showmen and women were selected.

The finals were held Saturday, July 20, where the top five showmen and women were selected. Every year, the top showman at the NJAS is honored with the Dean Hurlbut Award, named after the man who organized the first showmanship competition in 1967.

“I don’t think it’s hit me that I have actually won yet,” Link said. “I’ve been showing Angus cattle for the last eight years, and everything I’ve learned during this time has helped me to get to this point.”

Carolyn Gazda, Kristopher Lynn and Jake Tiedeman carefully evaluated exhibitors on their handling of their animal, their ability to follow instructions, and courtesy and sportsmanship in the showring. Past American Angus Association President Charlie Boyd served as the surrogate judge. During the preliminary round, exhibitors used their own cattle, but later during the finals, juniors had to choose a heifer to show selected by show officials to see how well they could present an unfamiliar animal.

All three judges agreed the competition was extremely high and all of the contestants should be extremely proud.

The National Junior Angus Showmanship Contest brings together the breed’s top young showmen, and it is considered an honor to be among those competing.

Visit www.angus.org for complete show results and news from the event.