Broadband and Next Generation Precision Ag are critical for creating vital access to world-class resources and opportunity for America’s farmers. 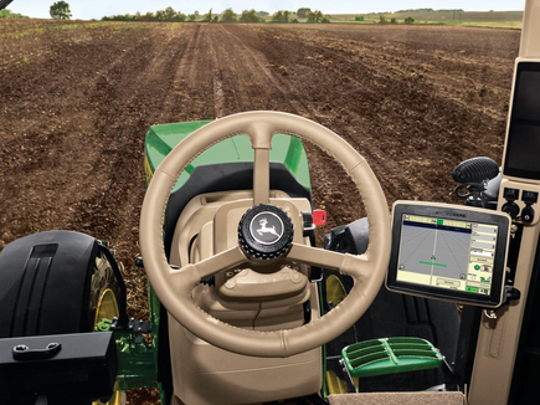 A USDA report finds that deployment of both broadband e-Connectivity and Next Generation Precision Agriculture Technology on farms and ranches throughout the U.S. could result in at least $47 billion in national economic benefits every year. (Photo: Deere & Company)

Agriculture Secretary Sonny Perdue unveiled a groundbreaking report on April 30, "A Case for Rural Broadband: Insights on Rural Broadband Infrastructure and Next Generation Precision Agriculture Technologies". The report finds that deployment of both broadband e-Connectivity and Next Generation Precision Agriculture Technology on farms and ranches throughout the U.S. could result in at least $47 billion in national economic benefits every year.

“Broadband and Next Generation Precision Agriculture are critical components for creating vital access to world-class resources, tools and opportunity for America’s farmers, ranchers, foresters and producers,” Secretary Perdue said. “Under the leadership of President Trump, USDA is committed to doing our part to clear the way for nationwide broadband connectivity that will allow the next generation of precision agriculture technologies to thrive and expand.”

The report also finds that if broadband infrastructure and digital technologies at scale were available at a level that meets estimated producer demand, the U.S. economy could realize benefits equivalent to nearly 18 percent of total agriculture production. Of that 18 percent, more than one-third is dependent on broadband e-Connectivity, equivalent to at least $18 billion in annual economic benefits that only high-speed, reliable internet can provide.

For many years, USDA and the American agriculture industry have been actively researching the feasibility, usage and potential upside of Next Generation Precision Agriculture technologies. Until now though, the interdependency of these technologies and broadband e-Connectivity has not been evaluated. The report released on April 30, explores this symbiotic relationship and quantifies the potential economic benefit of broadband buildout and the complementary adoption of connected agriculture technologies.

Going forward, the U.S. Department of Agriculture (USDA) will be engaged in multiple facets of infrastructure and technology deployment, including financing rural capital investments and supporting producers who are exploring which Next Generation Precision Agriculture Technologies are best suited to improve their operations and serve their customers.

In April 2017, President Trump established the Interagency Task Force on Agriculture and Rural Prosperity to identify legislative, regulatory and policy changes that could promote agriculture and prosperity in rural communities. In January 2018, Secretary Perdue presented the Task Force’s findings to President Trump. These findings included 31 recommendations to align the federal government with state, local and tribal governments to take advantage of opportunities that exist in rural America.

The Report identified Achieving e-Connectivity in Rural America as a cornerstone recommendation. The Administration has been executing this priority call to action through the American Broadband Initiative (ABI), which reflects rural broadband build-out as one of President Trump’s directives to the Federal government. A Case for Rural Broadband: Insights on Rural Broadband Infrastructure and Next Generation Precision Agriculture Technologies (PDF, 2.5 MB) opens the next chapter in the USDA’s response to this call to action.