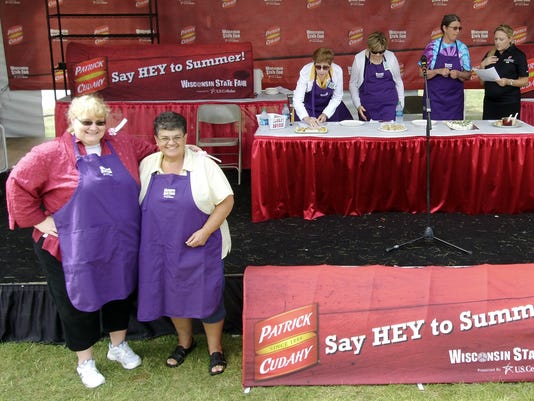 CUDAHY -  Patrick Cudahy®, The Home of Sweet Apple-Wood Smoked Flavor, has been providing quality bacon, ham, and sausage since 1888. Patrick Cudahy continued a delicious tradition at the Wisconsin State Fair this year by sponsoring a recipe contest featuring ham appetizers created by fans and home cooks on Friday.

The contest included two rounds of judging based on creativity and originality, taste, and presentation. The first round took place at the Horticulture, Craft and Culinary Pavilion at Wisconsin State Fair Park in June. The four finalists presented their recipes during Friday’s final round at the fair’s Central Park.

Campbell delivered a dish with the unmistakable flavor and quality of Patrick Cudahy ham. Her Cudahy Cream Puff “Hamsters”, a savory cream puff filled with ham, cream cheese, sour cream, fruit, and spices, are sure to be a holiday hit.

Sally Severson and Lindsey Slater from WISN-TV won the celebrity cooking competition for the second year in a row and donated their prize of free bacon and ham for a year to a local food pantry.

Other highlights throughout the day of bacon-loving fun included cooking demonstrations, live music, giveaways, and an appearance by the Pack House mobile tour.

"Patrick Cudahy Day was a tremendous success," said Bud Matthews, Patrick Cudahy senior vice president for Smithfield Foods. "Through our 18-year partnership with the Wisconsin State Fair, we've been able to offer our fans and Wisconsin neighbors one-of-a-kind experiences. We were delighted to see everyone have such a wonderful time at the fair."

For more information about Patrick Cudahy and the Wisconsin State Fair, visit www.Facebook.com/PatrickCudahyMeats.