White House says leaker about to be caught. Then new leaked copies of Trump schedule land

White House Chief of Staff Mick Mulvaney said Sunday that hope to identify the staffer who leaked Trump's schedule by the end of the week.

White House says leaker about to be caught. Then new leaked copies of Trump schedule land

President Donald Trump is pushing back against criticisms that a leak of his private schedule suggests he is not working hard.

Just hours after White House acting chief of staff Mick Mulvaney declared that he expected to identify the staffer who leaked President Donald Trump's personal schedule to the news media within the week, new copies of the president's schedule were published online.

When asked about the staffer who leaked copies of Trump's schedule from a three month period, Mulvaney said on "Fox News Sunday" that he hopes "to have a resolution on that this week."

But Axios then published more copies of Trump's schedule on Sunday, one week after their original story ran. The online publication revealed four days of the president's schedule from the previous week. Those days included about 50 percent of unstructured "Executive Time."

The newly-published schedules were consistent with the initial report that showed about 60 percent of the president's schedule consisted of "Executive Time." That report generated a wave of outrage and indignation from people who claimed the leak showed that the president was spending most of his time watching Fox News, firing off tweets or chatting on the phone.

Not so, says Trump.

On Sunday, the president posted a tweet in response to the first Axios report and explained that "Executive Time" should be "reported as a positive, not negative."

"When the term Executive Time is used, I am generally working, not relaxing. In fact, I probably work more hours than almost any past President," Trump tweeted.

He followed up with another tweet explaining that when he took office, the U.S. was such "a mess" that he "had no choice but to work very long hours!"

'I am part of the resistance': Anonymous senior Trump official blasts president as erratic and amoral

The media was able to get my work schedule, something very easy to do, but it should have been reported as a positive, not negative. When the term Executive Time is used, I am generally working, not relaxing. In fact, I probably work more hours than almost any past President.....

....The fact is, when I took over as President, our Country was a mess. Depleted Military, Endless Wars, a potential War with North Korea, V.A., High Taxes & too many Regulations, Border, Immigration & HealthCare problems, & much more. I had no choice but to work very long hours!

When the president's private schedule was leaked, political observers painted it as an unprecedented personal betrayal by a White House staffer.

"A White House aide is weaponizing his schedules, which says a lot about how people in the White House feel about the man they work for," tweeted New York Times White House correspondent Maggie Haberman after Axios published the leaked documents.

"What a disgraceful breach of trust to leak schedules," tweeted Trump's secretary Madeleine Westerhout‏. "What these don’t show are the hundreds of calls and meetings @realDonaldTrump takes everyday. This POTUS is working harder for the American people than anyone in recent history."

Still, on Sunday, Trump said that getting his "work schedule" was actually "very easy to do."

Mulvaney said Sunday that the leaked schedule "is not that confidential" and about 400 people get copies of it.

"It's not the content" that is upsetting, Mulvaney explained on "Fox News Sunday."

"It's the fact that someone within the White House spent three months collecting this information, which is really, really hard to do," he said.

FacebookTwitterGoogle+LinkedIn
Who’s out at the Trump White House: departures and dismissals
Fullscreen 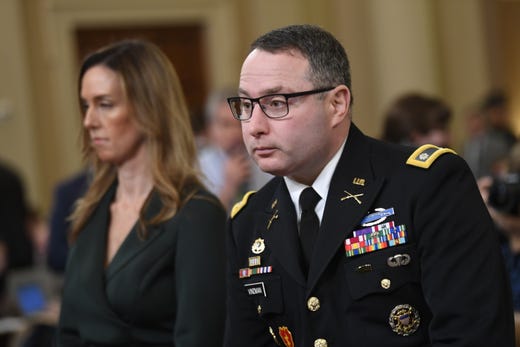 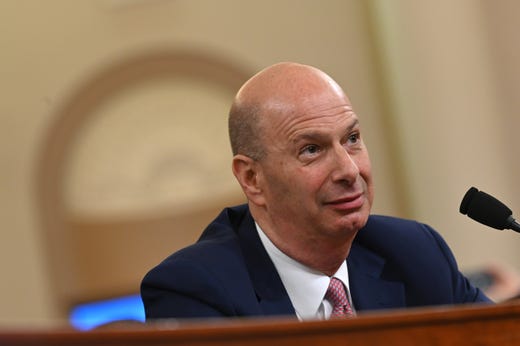 Gordon Sondland, former U.S. Ambassador to the European Union, was removed from his position on Friday, Feb. 7, 2020. He provided key testimony during the impeachment inquiry of US President Donald Trump. Jack Gruber, USA TODAY
Fullscreen 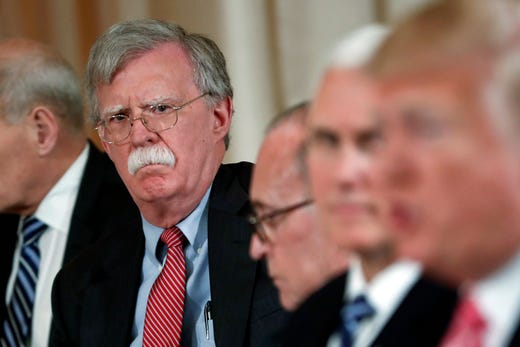 John Bolton resigned as National Security Adviser on Sept. 10, 2019 after President Donald Trump informed him that his services are no longer needed.  Bolton's departure comes amid internal disagreements at the White House over recent negotiations with the Taliban on ending the war in Afghanistan. Pablo Martinez Monsivais, AP
Fullscreen 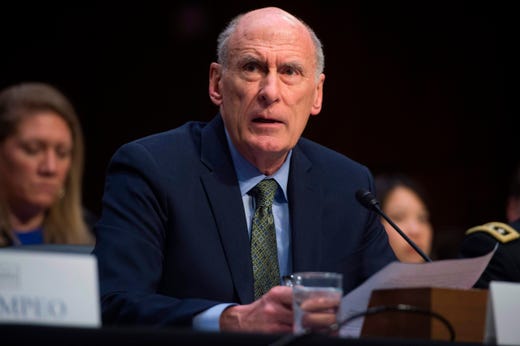 Labor Secretary Alex Acosta speaks at the Department of Labor in Washington on July 10, 2019. Acosta resigned on July 12, 2019 amid the fallout over a plea deal he made with wealthy financier Jeffrey Epstein, a sex offender charged with human trafficking girls as young as 14. Alex Brandon, AP
Fullscreen 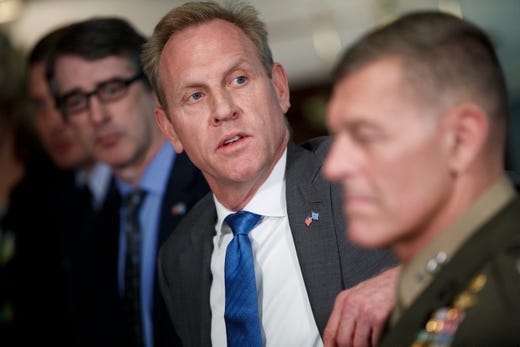 Acting Secretary of Defense Patrick Shanahan (C) delivers remarks during a meeting with Greek Minister of Defense Evangelos Apostolakis at the Pentagon on June 7, 2019. In a June 18 tweet, the president said Shanahan did "a wonderful job" but wanted to "devote more time to his family." The announcement came about an hour after USA TODAY detailed an FBI examination of a 2010 violent domestic dispute between Shanahan and his then-wife.  SHAWN THEW, EPA-EFE
Fullscreen 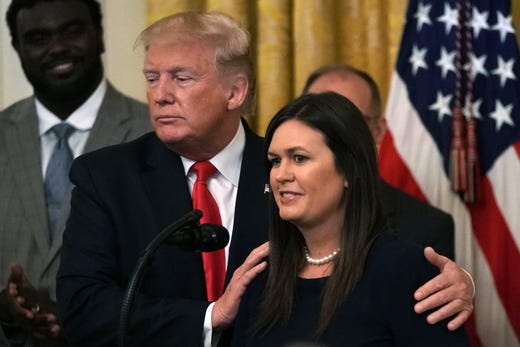 President Donald Trump and White House Press Secretary Sarah Sanders share a moment during an East Room event on June 13, 2019 at the White House in Washington, DC. President Trump announced that Sanders will be leaving her position at the White House. Alex Wong, Getty Images
Fullscreen 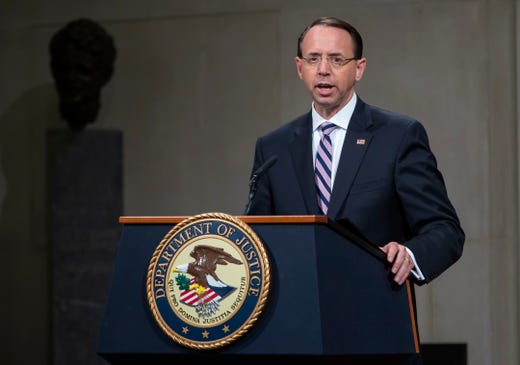 Deputy Attorney General Rod Rosenstein speaks during his 'Farewell Ceremony' at the Department Justice in Washington, DC, May 9. 2019. The Deputy Attorney General submitted his letter of resignation on April 29, effective May 11. He stepped down following the end of the Mueller investigation, during which he was often the target of President Donald Trump's criticism.  ERIK S. LESSER, EPA-EFE
Fullscreen

Linda McMahon, the head of the Small Business Administration, announced on March 29, 2019 she planned to step down in order to help raise money for President Donald Trump's re-election bid on a political action committee. Manuel Balce Ceneta, AP
Fullscreen 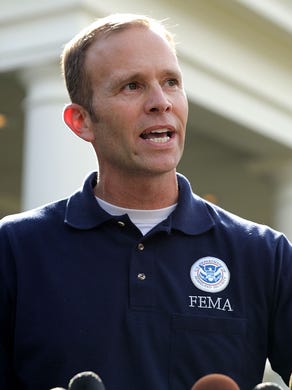 Federal Emergency Management Agency Administrator Brock Long talks to reporters outside the West Wing of the White House Sept. 26, 2017 in Washington. Long, who drew praise and criticism for his agency's response to major disasters, including Hurricane Maria, is leaving the agency. Chip Somodevilla, Getty Images
Fullscreen 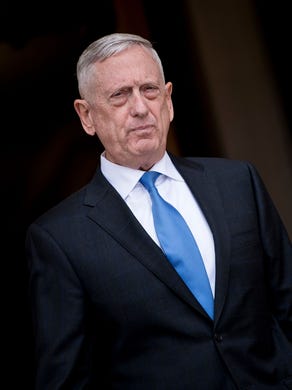 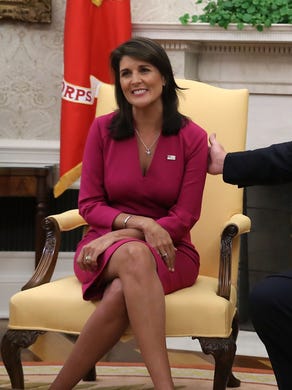 President Trump announces that he has accepted the resignation of Nikki Haley as U.S. Ambassador to the United Nations, in the Oval Office on Oct. 9, 2018 in Washington, DC. President Trump said that Haley will leave her post by the end of the year. Mark Wilson, Getty Images
Fullscreen 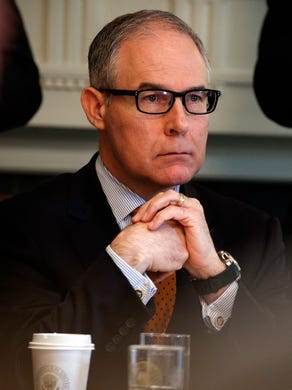 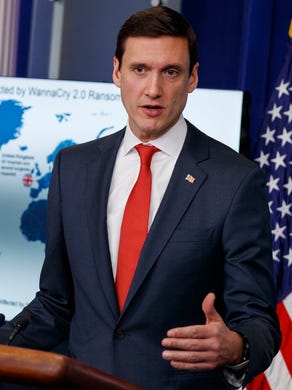 White House Homeland Security Adviser Tom Bossert speaks during a briefing blaming North Korea for a ransomware attack that infected hundreds of thousands of computers worldwide in May 2017 and crippled parts of Britain's National Health Service, at the White House, Tuesday, Dec. 19, 2017, in Washington. President Trump's administration was hit with a fresh resignation on April 10, 2018, as Bossert – a presidential favorite – announced his departure from the White House. "The president is grateful for Tom's commitment to the safety and security of our great country," White House press secretary Sarah Sanders said of his departure. Evan Vucci, AP
Fullscreen 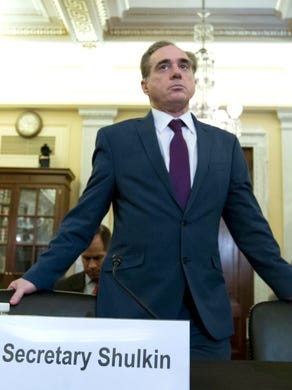 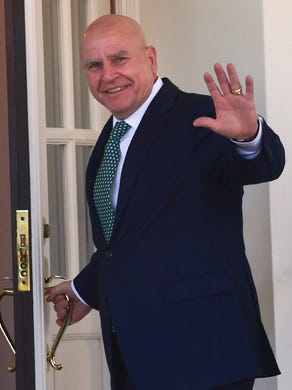 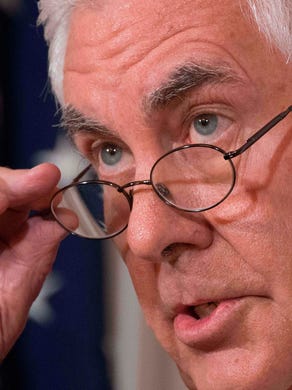 Secretary of State Rex Tillerson was fired via Twitter after returning from an Africa trip during which he was out of the loop on North Korean talks and contradicted the White House position on Russia's responsibility for poisoning a former double agent in the United Kingdom. In this file photo taken on Oct. 4, 2017 Tillerson speaks to the press at the State Department in Washington, D.C. Jim Watson, AFP/Getty Images
Fullscreen 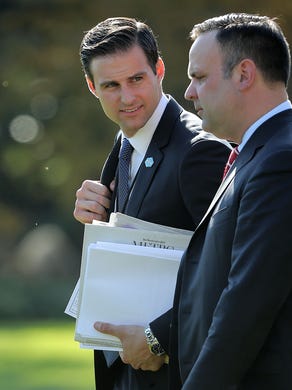 In this Feb. 27 2018 photo, White House Communications Director Hope Hicks, one of President Trump's closest aides and advisers, arrives to meet behind closed doors with the House Intelligence Committee, at the Capitol. Hicks announced her resignation Feb. 28, 2018. The news comes a day after Hicks was interviewed for nine hours by the panel investigating Russia interference in the 2016 election and contact between Trump's campaign and Russia. J. Scott Applewhite, AP
Fullscreen 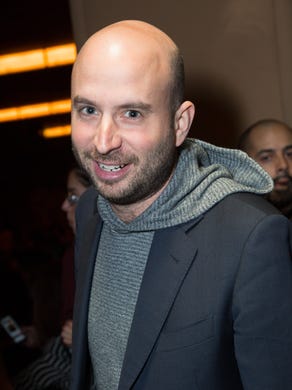 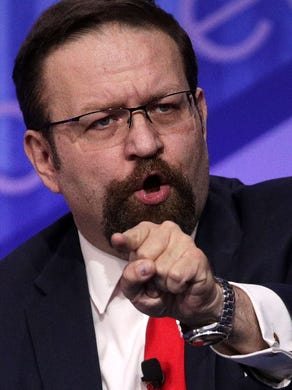 All of these President's men have taken their leave save Vice President Pence. President Donald Trump speaks on the phone with Russian President Vladimir Putin in the Oval Office of the White House on Jan. 28, 2017, along with Vice President Pence and Chief of Staff Reince Priebus, Chief Strategist Steve Bannon, Press Secretary Sean Spicer and National Security Advisor Michael Flynn. In the first seven months of his administration, Trump has seen the departures of many senior aides including Priebus, Bannon, Spicer and Flynn. Drew Angerer, Getty Images
Fullscreen 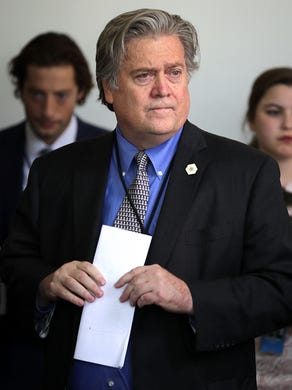 On Aug. 18, 2017, Steve Bannon left his post as senior adviser to President Trump. Seen here, Bannon helps with last minute preparations before President Trump announced his decision to pull out of the Paris climate agreement at the White House on June 1, 2017. Chip Somodevilla, Getty Images
Fullscreen

July 28, 2017, President Trump announced he is replacing his Chief of Staff Reince Priebus with General John F. Kelly. In this in this March 18, 2103 file photo, then Republican National Committee Chairman Reince Priebus talks with members of the press, after speaking at the National Press Club, in Washington. Win McNamee, Getty Images
Fullscreen 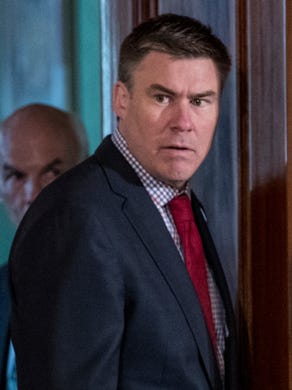 May 18, 2017, the President's White House first Communications Director Mike Dubke hands in his resignation after three month. He's seen in this photo taken April 20, 2017, arriving in the East Room of the White House in Washington. Andrew Harnik, AP
Fullscreen 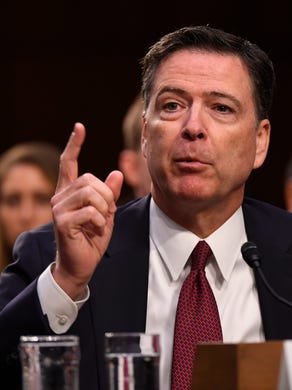 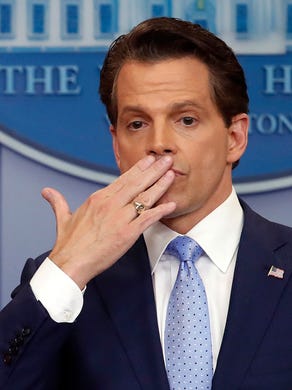 Walter Shaub resigned his post as director of the United States Office of Government Ethics on July 6, 2017. Shaub, who prodded President Donald Trump's administration over conflicts of interest resigned to take a new job, at the Campaign Legal Center, a nonprofit in Washington that mostly focuses on violations of campaign finance law. Mary Mathis, USA TODAY
Fullscreen

Mike Dubke (R) on May 30, 2017, confirmed his resignation as White House communications director. Counselor to the US President Kellyanne Conway (L) and Director of Communications for the Office of Public Liaison Omarosa Manigault (2-L) and Dubke listen as a reporter asks a question during a joint press conference in the East Room of the White House in Washington, on April 20, 2017. Shawn Thew, European Pressphoto Agency
Fullscreen

Deputy National Security Advisor, K.T. McFarland speaks during an event celebrating Women's History Month, in the East Room at the White House, March 29, 2017, in Washington, DC. On April 9, 2017, McFarland was asked to step down and serve instead as ambassador to Singapore. Mark Wilson, Getty Images
Fullscreen Katie Walsh left her job as White House deputy chief of staff less than three months into the Trump administration on March 30, 2017, for a private sector role. In this Nov. 14, 2016, file photo, Katie Walsh appears at a post-election press briefing to discuss the RNC's role in the election, at the Capitol Hill Club in Washington. Cliff Owen, AP
Fullscreen 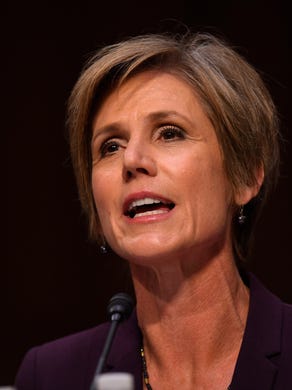 On Feb. 14, 2017, Michael Flynn abruptly resigned from his position as National Security Advisor after facing increased scrutiny due to reports that the Justice Department contacted the White House in regards to Flynn's alleged pre-inauguration conversations with the Russian ambassador concerning sanctions. This Jan. 22, 2017, shows Flynn arriving to a swearing in ceremony of White House senior staff in the East Room of the White House in Washington. Pool photo by Andrew Harrer, AP
Fullscreen