Rep. Jackie Speier: I hope women and men wear black to State of the Union

House Democratic women plan to wear black when President Trump addresses Congress at his first State of the Union this month.

Rep. Jackie Speier: I hope women and men wear black to State of the Union

#MeTooCongress is planning to make a statement at President Donald Trump’s first State of the Union Address. Veuer's Chandra Lanier has the story.

House Democratic women plan to wear black when President Trump addresses Congress at his first State of the Union this month.

But Rep. Jackie Speier hopes that more people would wear the color in a symbolic stand against sexual harassment.

"I hope we see men and women across the House floor wearing black and embracing the concept that we do not tolerate sexual harassment," the California Democrat told USA TODAY on Thursday.

The idea of people wearing black to Trump's joint address on Jan. 30 was born after actors did it for the Golden Globes on Sunday, Speier said. The Democratic Women's Working Group, of which Speier is the policy and communications chair, is encouraging its members to don the color (though it's not a requirement).

"Whether you're in Hollywood or in politics, we will show sexual harassment will not be tolerated," she said. 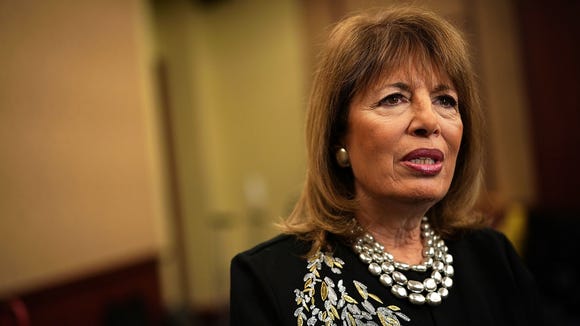 The protests come as as the country focuses on a wave of accusations of sexual misconduct against Hollywood power players, journalists and politicians.

Speier, who has led the push for sexual harassment training on Capitol Hill, also noted that she thought their actions would send a "strong message" to the president, who himself has been accused of sexual harassment and sexual assault by several women. Some of his accusers have called for a congressional investigation into the president's behavior.

More: Congress has been warned for years it is not doing enough to stop sexual harassment

"This is a moment in time we can create that we've never seen before in my lifetime," she said. "...My first obligation is to clean up the House, and to clean up government in general."

The other leaders of the Democratic women's group agreed with the importance of the moment.

"By wearing black, members of Congress are showing solidarity with a movement that is demanding economic justice and a cultural shift that enables men and women to work side by side in safety and dignity, free of sexual harassment, and be paid equally for the value of their work," Rep. Lois Frankel, the Florida Democrat who chairs the group, said in a statement.

Rep. Brenda Lawrence, vice chair of the Democratic women's group, said it was important for members to show unity with not only colors, but actions as well.

"Sexual abuse and failure of the judicial system in administering justice has been a reality for too many for too long and we certainly cannot and will not stand for it," the Michigan Democrat said in a statement.

In addition to the fashion protest, members of the Congressional Black Caucus plan to wear in honor of Recy Taylor, an Alabama woman whose rapists were never brought to justice.

More: Black lawmakers to salute Alabama's Recy Taylor at State of the Union