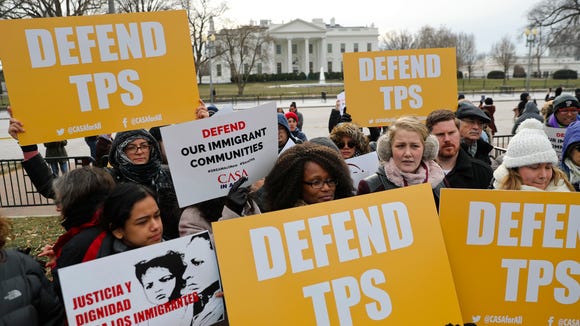 CASA de Maryland, an immigration advocacy and assistance organization, holds a rally in Lafayette Park, across from the White House in Washington on Jan. 8, 2018, in reaction to the announcement regarding Temporary Protective Status for people from El Salvador. The Trump administration is ending special protections for Salvadoran immigrants, forcing nearly 200,000 to leave the U.S. by September 2019 or face deportation. El Salvador is the fourth country whose citizens have lost Temporary Protected Status under President Donald Trump, and they have been, by far, the largest beneficiaries of the program, which provides humanitarian relief for foreigners whose countries are hit with natural disasters or other strife. (Photo: Pablo Martinez Monsivais, AP)

President Trump will order nearly 200,000 immigrants in the U.S to return to El Salvador by the end of next year, ending a temporary legal status that granted refuge in the States after earthquakes devastated their Central American home country.

Most all of them pay taxes, El Salvador's U.S. embassy estimated, and over half own their homes. What's messier: Since arriving in 2001, they've had 192,000 children — all U.S. citizens.

"The substantial disruption of living conditions caused by the earthquake" no longer exists, the Department of Homeland Security said in a statement on Monday.

It's the day in politics from OnPolitcs Today. Subscribe here.

Psychiatric exam for Trump? No way, say aides who claim he's 'sharp as a tack'

Trump, who recently defended himself as a "stable genius" who is "like, really smart," will not undergo a psychiatric exam during his physical on Friday. He's "sharp as a tack," deputy spokesman Hogan Gidley said Monday. And psychiatric exams aren't part of presidential physicals, anyway. But questions about Trump's mental health are abound after a new tell-all book, Fire and Fury, has many openly doubting Trump's stability. The book has also upended Trump's relationship with ex-adviser Steve Bannon, who apologized Sunday for blaming Trump's son for a "treasonous" meeting with a Russian.

Speaking of Russia: Mueller wants to talk to Trump

Federal investigators want an interview with Trump into the expansive Russia investigation tied to the 2016 presidential election. They're in very early talks with Trump's legal team, one official said privately, and it could take weeks to nail down the scope of the interview and how exactly it might work. But the talks represent a definite step toward concluding whether Trump aimed to obstruct the investigation when he fired FBI Director James Comey last May.

Oprah Winfrey's lauded speech at Sunday's Golden Globes launched a million tweets over whether she might run for president in 2020. In the Trump era, many say, it's not so farfetched: She'd be "the top contender, no doubt bout it" if she ran, Howard Dean's 2004 campaign manager told USA TODAY. Winfrey had rejected the idea of running int he past, but her longtime partner Stedman Graham said "she would absolutely do it" if the people called on her.