Air Force officials, warning about threats from Russia and China, say the military must add planes and troops to confront them. 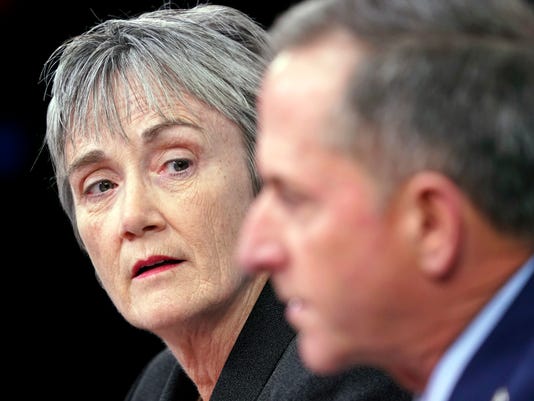 WASHINGTON – Top Air Force officials said the service must grow dramatically by 2025, including the addition of dozens of combat squadrons and 40,000 airmen, to confront increasing threats posed by China and Russia.

Air Force Secretary Heather Wilson and Gen. David Goldfein, the chief of staff, said they would need to develop cost estimates before they present their plan to Congress. Military analysts said the new forces could cost more than $30 billion a year.

Wilson and Goldfein outlined the initiative, titled “The Air Force We Need,” at the Pentagon on Monday.

The plan is based on President Donald Trump’s defense strategy, assessments of the military strength of adversaries and the ability of the Air Force to confront them, Wilson and Goldfein said. The 2018 National Defense Strategy, released in January, calls on the Pentagon to defend the homeland, maintain the nuclear weapons deterrent, defeat China or Russia, deal with threats such as Iran and North Korea and continue to fight extremists.

“The most stressing of all those cases is China,” Wilson said.

The Air Force plan envisions threats to U.S. national security increasing for five years, starting in 2025. It calls for spending to begin now to meet them.

Chief among the recommendations is adding 74 combat squadrons to the group of 312, an increase of almost 24 percent. The squadron is the basic fighting unit of the Air Force. A fighter squadron may contain 18 to 24 aircraft.

Bombers represent the most critical need, Wilson said: The Air Force has nine squadrons and needs five more. It needs to add 14 refueling tanker squadrons to the 40 it has, she said.

Those aircraft will need pilots, maintainers and other support personnel. She and Goldfein estimated the ranks of the active-duty and reserve components of the Air Force would need to grow to 717,000 airmen, an increase of 40,000.

“The Air Force is too small for what the nation is asking us to do,” Wilson said. “We have 312 squadrons today. Our analysis says that we need 386.”

Wilson and Goldfein declined to estimate the cost of plan, suggesting it was affordable. “It’s not gold-plated,” she said.

Analysts said adding aircraft and the airmen needed to operate them is an expensive proposition.

The compensation costs for 40,000 airmen would total about $5.2 billion per year, said Todd Harrison, a military budget expert at the Center for Strategic and International Studies. The Air Force spends about $53 billion annually on operations, training and recruiting, Harrison said. A 24 percent increase in squadrons would bump that cost by $13 billion, he said.

The bottom line for flying the new warplanes and paying the airmen would top $18 billion, he said. That doesn’t include the cost of buying the new aircraft.

“I could not even hazard a guess on this without knowing the mix of aircraft involved,” Harrison said.

Based on a 20 percent increase in the current budget request by the Air Force, Loren Thompson, a defense industry consultant and military analyst at the Lexington Institute, estimated the service would need an extra $30 billion a year.

With inflation, that would boost the Air Force budget beyond $200 billion by 2030, he said. That's more than the $175 billion the Chinese spends on its army, navy and air force, Thompson said.