As controversy builds around Trump Jr.'s meeting with Kremlin-backed lawyer Natalia Veselnitskaya, a look back at how we got here. 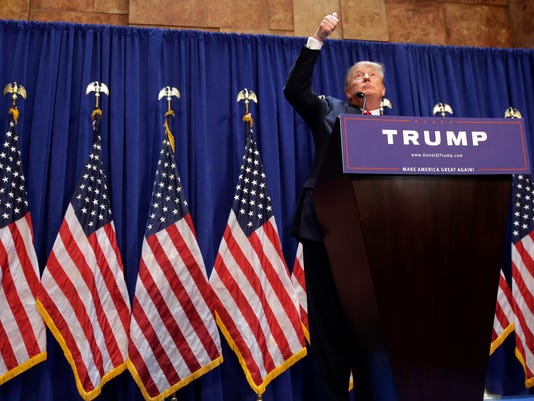 Donald Trump announces that he will run for president at Trump Tower in New York on June 16, 2015.(Photo: Richard Drew, AP)

As controversy builds around Donald Trump Jr.'s meeting with Kremlin-backed lawyer Natalia Veselnitskaya, a look back at how we got here.

Here are some key dates surrounding the president's son and his meeting:

Donald Trump and family members attend the 2013 Miss Universe competition in Moscow. The pageant, owned by Trump at the time, was sponsored by Aras Agalarov, a real estate developer. Following the pageant, Trump signed a deal with Agalarov to build a Trump Tower in Moscow, though the deal was stalled when Trump ran for president. Emin Agalrov is Aras's son and a pop star in Russia.

Trump launches his campaign for president, largely seen by political experts as a sideshow to the real contest.

Donald Trump Jr. receives an email from entertainment publicist Rob Goldstone saying that Aras Agalrov was contacted by the crown prosecutor of Russia, who wanted to provide the Trump campaign with damaging information on Hillary Clinton. Goldstone said the information "would incriminate Hillary and her dealings with Russia and would be very useful to your father."

He continued: "This is obviously very high level and sensitive information but is part of Russia and its government's support for Mr. Trump — helped along by Aras and Ermin."

Minutes later, Trump Jr. responded: “If it’s what you say I love it especially later in the summer.”

Goldstone emails Trump Jr. asking him when he is available to speak over the phone "about this Hillary info."

The final primaries of the 2016 election season take place.

Separately, in a speech, Trump promises to deliver a "major speech" to reveal damaging information about Clinton "probably" June 13.

Trump Jr. confirms the meeting to be held in his office the following day.

Russian lawyer Natalia Veselnitskaya meets with Trump Jr., along with Kushner and Manafort, in Trump Jr.'s office in Trump Tower.

Trump acknowledges that he had promised a major speech about Clinton, but instead said he would discuss her failings in depth another time.

"This was going to be a speech on Hillary Clinton and how bad a President, especially in these times of radical Islamic terrorism, she would be," Trump said. "There will be plenty of opportunity to discuss these important issues at a later time, and I will deliver that speech soon."

Trump Jr. gives a speech at the Republican National Convention stating his father would “put America first” if elected.

Trump officially becomes the GOP presidential nominee with the end of the Republican National Convention.

The remainder of the DNC emails are released by WikiLeaks.

Donald Trump in a news conference calls on Russia to release emails from Clinton's private server that were destroyed: “If you’re listening, I hope you’re able to find the 30,000 emails that are missing.”

Manafort is fired from the campaign.

The U.S. intelligence community issues its finding that Russia is attempting to interfere with the election. The same day, WikiLeaks releases the first of compromised emails from John Podesta, Clinton's campaign chairman.

Kushner accepts a job in the new administration as a White House adviser. He is cleared to take it on Jan. 21. As part of security clearance, he is required to report meetings with foreign officials such as the one with Veselnitskaya.

The New York Times first reports the previously undisclosed meeting between Trump Jr., Kushner, Manafort and Veselnitskaya. The Times reported that Trump Jr. told them in a statement the meeting was “primarily about an adoption program. The statement did not address whether the presidential campaign was discussed.”

The Times reports the presidential campaign was a topic of the meeting. The article cited five sources who stated Trump Jr. agreed to the meeting on the premise that damaging information on Hillary Clinton would be provided.

Following the article, Trump Jr. confirmed he agreed to the meeting because of the information on Clinton, though the information provided was not useful and the meeting was actually about adoption: “It became clear to me that this was the true agenda all along and that the claims of potentially helpful information were a pretext for the meeting,” Trump Jr. stated.

The Washington Post reports  the meeting was arranged at the request Emin Agalrov by Goldstone.

Later that evening, the Times reports Goldstone presented the meeting in an email to Trump Jr. promising information on Clinton. According to the article, Trump Jr. did not indicate he believed Veselnitskaya was connected to the Russian government — something she has denied.

Donald Trump Jr. posts screenshots of the emails between him and Goldstone on Twitter. He also includes a statement saying he believed the meeting would be about "Political Opposition Research" and originally wanted to have the meeting over the phone.

"To put this in context," Trump Jr. stated, "this occurred before the current Russian fever was in vogue."

President Trump, aboard Air Force One, tells reporters, "Don is — as many of you know Don — he's a good boy. He's a good kid. And he had a meeting, nothing happened with the meeting."

The president said, "I only heard about it two or three days ago," but his understanding was the meeting was arranged to discuss some opposition research and nothing came of it. "Honestly, in a world of politics, most people are going to take that meeting," Trump said.

Senate Judiciary Chairman Chuck Grassley, R-Iowa, said he wants Trump Jr. to testify before the committee and would be willing to issue a subpoena to compel his testimony if necessary. 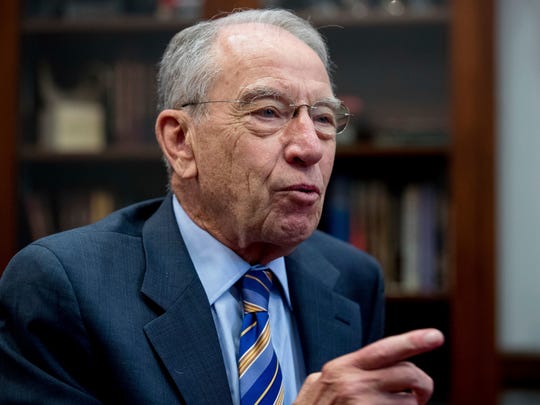 NBC News reported that a Russian-American lobbyist who is a veteran of the Russian military also attended the Trump Tower meeting. The lobbyist, Rinat Akhmetshin, confirmed to The Washington Post that he had been in the room, and said he had been invited to the meeting by Veselnitskaya.

Did Donald Trump Jr. break any laws by seeking damaging information on Hillary Clinton from Russia?

Trump Jr. holds his daughter Chloe and son Donald Trump III as they walk off Air Force One at Andrews Air Force Base on April 16, 2017. Jim Watson, AFP/Getty Images
Fullscreen

Trump Jr. and his brother Eric attend their father's announcement of Neil Gorsuch as his nominee for the Supreme Court in the East Room of the White House on Jan. 31, 2017. Michael Reynolds, European Pressphoto Agency
Fullscreen 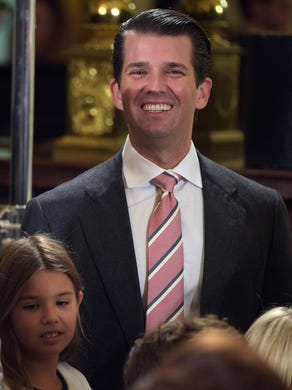 Trump Jr. and his sister Ivanka arrive on Capitol Hill for their father's inauguration on Jan. 20, 2017. Saul Loeb, AP
Fullscreen

Trump Jr. arrives at Trump Tower for meetings with his father on Nov. 15, 2016. Timothy A. Clary, AFP/Getty Images
Fullscreen

Trump Jr. places a hand on the shoulder of his father at a rally on the final night of the presidential campaign at the SNHU Arena in Manchester, N.H., on Nov. 8, 2016. Mandel Ngan, AFP/Getty Images
Fullscreen 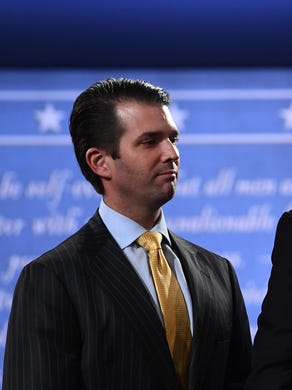 Trump Jr. delivers a speech on behalf of his father as he campaigns at the Neshoba County Fair in Philadelphia, Miss., on July 26, 2016. Keith Warren, AP
Fullscreen

Trump Jr. speaks on the second day of the Republican National Convention at the Quicken Loans Arena in Cleveland on July 20, 2016. Jim Watson, AFP/Getty Images
Fullscreen

Trump Jr., Ivanka Trump and Eric Trump celebrate on the convention floor during the second day of the Republican National Convention in Cleveland on July 19, 2016. Carolyn Kaster, AP
Fullscreen

Trump Jr. is introduced by his father at the Indiana Farmers Coliseum on April 27, 2016, in Indianapolis. John Sommers II, Getty Images
Fullscreen

Trump Jr. holds his daughter while he speaks with reporters as he arrives at a polling station during the New York primary on April 19, 2016, in Manhattan. Eduardo Munoz Alvarez, AFP/Getty Images
Fullscreen

Trump Jr. looks on as his father speaks at a caucus night watch party at the Treasure Island Hotel & Casino on Feb. 23, 2016, in Las Vegas. Ethan Miller, Getty Images
Fullscreen

Trump Jr. and his sister Ivanka pose inside the Chicago offices of their father near the site of his 92-story residential tower under construction along the Chicago River on May 10, 2006. Charles Rex Arbogast, AP
Fullscreen

Trump Jr. and his sister Ivanka pose for a photo on the penthouse terrace of the Trump Park Avenue building in New York on April 11, 2006. Richard Drew, AP
Fullscreen