US-China trade war elevates the risks to the global economy

The trade war between the U.S. and China carries a major risk of escalation that could weaken investment, depress spending and slow global economy.

US-China trade war elevates the risks to the global economy 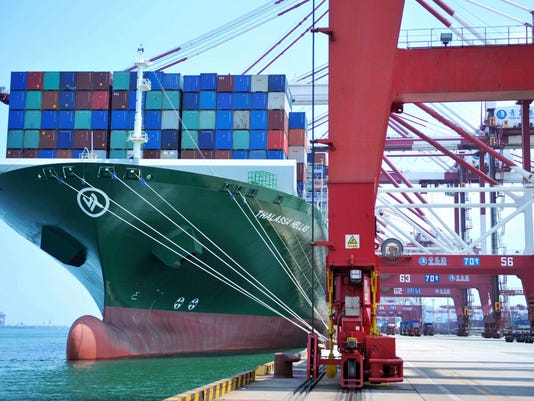 A ship hauls containers at a container port in Qingdao in eastern China's Shandong province Friday, July 6, 2018. The United States hiked tariffs on Chinese imports Friday and Beijing said it immediately retaliated in a dispute between the world's two biggest economies that President Donald Trump says he is prepared to escalate.(Photo: AP)

WASHINGTON (AP) — The trade war that erupted Friday between the U.S. and China carries a major risk of escalation that could weaken investment, depress spending, unsettle financial markets and slow the global economy.

The opening shots were fired just after midnight, when the Trump administration imposed a 25 percent tariff on $34 billion of imports from China, and Beijing promptly retaliated with duties on an equal amount of American products. It accused the U.S. of igniting "the biggest trade war in economic history." 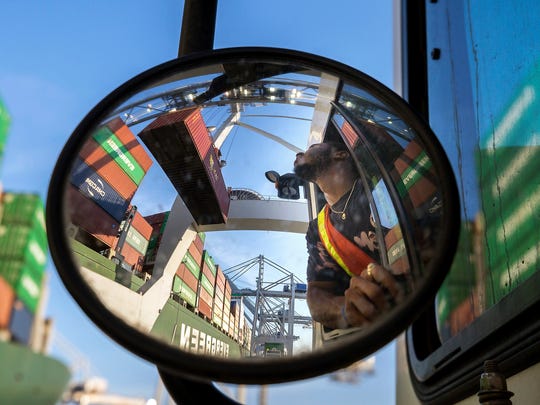 In this June, 19, 2018 photo, a jockey truck driver waits for his load of a shipping container to clear his trailer as a shore crane lifts the 40-foot onto the container vessel Ever Linking at the Port of Savannah in Savannah, Ga. The U.S. has threatened to impose 25 percent duties on $34 billion in Chinese products starting Friday, July 6, and China has said it will fire back with corresponding tariffs. (Photo: Stephen B. Morton, AP)

Because of this first round of hostilities, American businesses and, ultimately, consumers could end up paying more for such Chinese-made products as construction equipment and other machinery. And American suppliers of soybeans, pork and whiskey could lose their competitive edge in China.

These initial tariffs are unlikely to inflict serious harm to the world's two biggest economies. Gregory Daco, head of U.S. economics at Oxford Economics, has calculated that they would pare growth in both countries by no more than 0.2 percent through 2020.

But the conflict could soon escalate. President Donald Trump, who has boasted that winning a trade war is easy, has said he is prepared to impose tariffs on up to $550 billion in Chinese imports — a figure that exceeds the $506 billion in goods that China shipped to the U.S. last year. 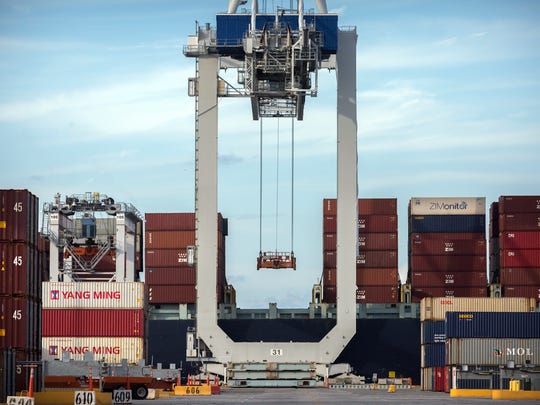 In this Thursday, July, 5, 2018 photo, a ship to shore crane prepares to load a 40-foot shipping container onto a container ship at the Port of Savannah in Savannah, Ga. The United States and China launched what Beijing called the "biggest trade war in economic history" Friday, July 6, imposing tariffs on billions of dollars of each other's goods amid a spiraling dispute over technology. (Photo: Stephen B. Morton, AP)

Escalating tariffs are likely to slow business investment as companies wait to see whether the administration can reach a truce with Beijing. Some employers will probably put hiring on hold until the picture becomes clearer. The damage could risk undoing some of the economic benefits of last year's tax cuts.

"Trade disruption is the greatest threat to global growth," said Dec Mullarkey, managing director of investment strategies at Sun Life Investment Management. "The direct effects will be amplified as business confidence drops and investment decisions are delayed. Markets are still hoping that the key players return to the negotiation table."

The root of the conflict is the Trump administration's assertion that China has long used predatory tactics in a drive to supplant America's technological supremacy. Those tactics include cyber-theft as well as forcing companies to hand over technology in exchange for access to China's market. Trump's tariffs are meant to press Beijing to change its ways.

The rift with China is the most consequential trade conflict the administration has provoked. But it's hardly the only one.

Trump is also sparring with the European Union over his threat to tax auto imports and with Canada and Mexico over his push to rewrite the North American trade pact. And he has subjected most of America's trading partners to tariffs on steel and aluminum.

Many caught in the initial line of fire — U.S. farmers absorbing tariffs on their exports to China, for instance — are fearful. The price of soybeans has plunged 13 percent over the past month on fears that Chinese tariffs will cut off American farmers from China, which buys about 60 percent of their soybean exports.

"For soybean producers like me, this is a direct financial hit," said Brent Bible, a soy and corn producer in Romney, Indiana. "These tariffs could mean the difference between a profit and a loss for an entire year's worth of work out in the field, and that's only in the near term."

Christine LoCascio, an executive at the Distilled Spirits Council, said she fears China's tariffs on U.S. whiskey will "put the brakes on an American success story" of rising exports of U.S. spirits. 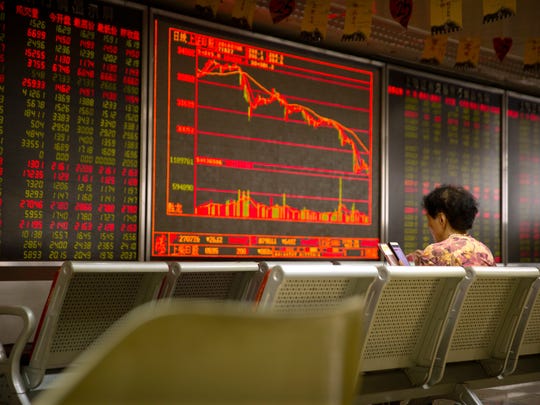 A Chinese investor uses her smartphone as she monitors stock prices at a brokerage house in Beijing, Friday, July 6, 2018. President Donald Trump made clear Thursday that U.S. tariffs against Chinese imports will take effect early Friday and that he's prepared to sharply escalate a trade war between the world's two biggest economies. (Photo: Mark Schiefelbein, AP)

Even before the first shots, the prospect of a trade war was worrying investors. The Dow Jones industrial average has shed hundreds of points since June 11. But the risks are now priced into the market, and the Dow actually rose nearly 100 points Friday to 24,456.48.

China's currency, the yuan, has dropped 3.5 percent against the dollar over the past month, giving Chinese companies a price edge over their U.S. competition. The drop might reflect a deliberate devaluation by Beijing to signal its "displeasure over the state of trade negotiations," according to a report from the Institute of International Finance, a banking trade group.

The Trump administration sought to limit the impact of the tariffs on U.S. households by targeting Chinese industrial goods, not consumer products, for the first round of tariffs.

But that step raises costs for U.S. companies that rely on Chinese-made machinery or components. And it could force them to pass those higher costs on to their business customers and, eventually, to consumers.

In this June 21, 2018, photo, Buck Paulk, owner of Shiloh Pecan Farms, hold a pecan under one of his trees in Ray City, Ga. Paulk estimates that over 50 percent of his pecans are exported out of the country, China being one of the main recipients. Georgia is the nation's leading producer of pecans. (Photo: David Goldman, AP)

If you like Chick-fil-A sandwiches, for instance, you may feel the effects. Charlie Souhrada of the North American Food Equipment Manufacturers said the tariffs could raise the cost of a kind of pressure cooker Chick-fil-A uses.

The administration has placed "these import taxes squarely on the shoulders of manufacturers and, by extension, consumers," Souhrada said.

One way the tariffs will squeeze farmers, landscapers and construction firms is by raising the price of excavators and loaders made by Bobcat, which uses attachments imported from China. U.S. suppliers rarely make these attachments, so the company must import them.

Jason Mayberry, Bobcat's assistant general counsel, said in a filing submitted to the U.S. Trade Representative's office that the company would have to raise prices to offset the tariff. Bobcat's raw material costs have also risen because of the administration's steel and aluminum tariffs. 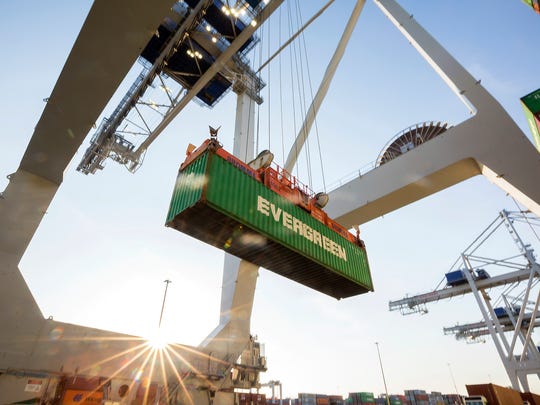 In this June, 19, 2018 photo, a ship to shore crane lifts a 40-foot Evergreen Line shipping container off a jockey truck onto a container ship at the Port of Savannah in Savannah, Ga. The U.S. has threatened to impose 25 percent duties on $34 billion in Chinese products starting Friday, July 6, and China has said it will fire back with corresponding tariffs. (Photo: Stephen B. Morton, AP)

The Federal Reserve is picking up signs that the trade war is causing businesses to rethink investment plans. In the minutes from its June meeting, the Fed noted that some companies have delayed or reduced plans to buy or upgrade equipment.

And if Trump extends the tariffs to up to $550 billion in Chinese imports, consumers won't be able to avoid getting caught in the crossfire: The taxes would hit products like televisions and cellphones.

That's what happened to imported washing machines, which were hit by separate Trump tariffs in January. Over the past year, their price has surged more than 8 percent.

"Tariffs will bring retaliation and possibly more tariffs," said Jay Timmons, president of the National Association of Manufacturers. "No one wins in a trade war."