From distillers to farmers, trade war would cause casualties

If a trade war is coming, the cheesemakers of Wisconsin are standing in the line of fire.

From distillers to farmers, trade war would cause casualties

Jeff Colombini looks over bing cherries in one of his orchards in Friday, June 1, 2018, in Stockton, Calif. Colombini is worried about the financial impact of retaliatory tariffs on his 1,800 acre farm, which grows and exports apples, cherries and walnuts. Mexico, Canada and the EU are threatening tariffs on a variety of US products in response to the Trump administration's tariffs on steel and aluminum imports.(Photo: Terry Chea, AP)

WASHINGTON - If a trade war is coming, the cheesemakers of Wisconsin are standing in the line of fire. So are the farmers of the Great Plains and the distillers of Kentucky. And the employees of iconic American brands like Harley-Davidson and Levi Strauss.

The likelihood of a trade conflagration leapt closer to reality this week after the United States imposed tariff on steel and aluminum imports from Canada, Mexico and the European Union. Infuriated, the jilted U.S. allies vowed to retaliate with tariffs of their own. And in a separate dispute, China is poised to penalize $50 billion in U.S. goods — many of them produced by supporters of President Donald Trump in the America's agricultural heartland.

"They're going to hit the farmers," said Bryan Klabunde, a farmer in northwestern Minnesota. "We want things fair for all industries, but we're going to take the brunt of the punishment if other countries retaliate.'"

President Donald Trump, who entered office promising to rip up trade deals and crack down on unfair trading practices, is clashing with trading partners on all sides. To the north, he's battling Canada; to the south, Mexico; to the east, Europe; across the Pacific Ocean to the west, China and Japan. 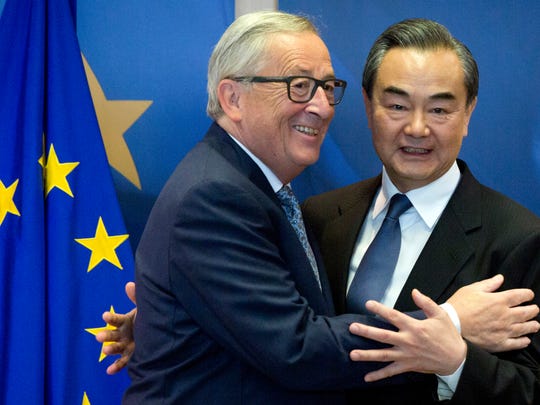 "The president seems to be creating trade (and other) disputes with everyone — allies and adversaries alike -- and it's difficult to discern any coherent strategy," said Rod Hunter, a former National Security Council staffer under President George W. Bush. "The impacts of the disputes have been limited so far, but the economic and political costs will go up as retaliation by trading partners begins in earnest."

Mexico, for instance, plans to retaliate against the steel and aluminum tariffs by targeting U.S. cheese, among other products.

"It's our second-largest market," Jeff Schwager, president of Sartori, a cheese company in Plymouth, Wisconsin, said of Mexico. Retaliatory tariffs "will reduce sales — there's no question."

"The hard-earned sales we've secured in Mexico could be at risk given the potential for retaliation," the National Milk Producers Federation warned in a statement.

On Friday, reporters in Louisville, Kentucky, asked McConnell if he thought the Europeans were trying to get his attention.

"Well," the Senate leader said, "they got my attention. They didn't need to do that. These are our friends. These are not enemies. Canada and Mexico, Europe — these are our allies, and we need to work this out in a way that's comforting to everyone."

Harley-Davidson has already absorbed higher steel and aluminum costs since Trump first announced the metals tariffs three months ago. Now, the threats of retaliatory tariffs from abroad raise the fear of higher prices for Harley motorcycles sold outside the U.S.

In a statement, Harley-Davidson said retaliatory tariffs "would have a significant impact on our sales" in those countries. The Milwaukee-based company said it was evaluating options for controlling higher materials costs. In April, its chief financial officer warned that cost increases could be worse than the company forecast in January and might last for several quarters.

The jeans maker Levi Strauss is also on the EU's target list.

"American brands, workers and consumers will ultimately suffer," the San Francisco-based company said in a statement.

Ben Steffen, a dairy farmer who also grows corn, soybeans, and wheat on 1,900 acres southeastern Nebraska near Humboldt, is angry about the U.S. tariffs being imposed on America's closest trade partners and allies.

"I'm upset because it hits me in my pocketbook from multiple angles," he said. "I sell beef, I sell corn, I sell soybeans and I sell milk. All of those products are vulnerable because we export significant amounts in those markets."

The milk market has been depressed for about three years, and farmers have struggled to break even. About 14 percent of U.S. milk production is exported; the largest customer is Mexico.

"This is the worst possible thing to have for our milk market, and it's the same for every other commodity," Steffen said. " These are important relationships."

In Stockton, California, Jeff Colombini is worried about the financial damage a trade war would bring to his 1,800-acre farm. His company, Lodi Farming, exports walnuts, cherries and apples to Mexico, Canada, the European Union and other countries.

"With these tariffs, it's going to make the product too expensive for the consumers in Mexico and in Canada and in the EU," Colombini said. "We're not going to be able to sell all of our crop. And so some of it is probably going to go unharvested or just dumped ... I have 200 employees, and they depend on the success of this operation for their jobs to feed and clothe their families."

A trade fight with the Europe would also cause collateral damage across the Atlantic. Steelworkers in Port Talbot, Wales, who have struggled to protect their factory and 4,000 jobs, now face another threat.

Union leader Mark Turner said workers are trying to sort out what the tariffs will mean for Port Talbot. But they feel "everything is against us," particularly given Britain's economic uncertainty as the country prepares to leave the European Union.

"We will keep fighting," Turner said. "If we can't go into the American market, then there's other markets out there we will try and get into.

An even higher-stakes trade dispute is playing out on the Pacific Rim. The United States and China are poised to impose tariffs on up to $200 billion worth of each other's goods in a battle over Beijing's strong-arm efforts to overtake U.S. technological supremacy.

Commerce Secretary Wilbur Ross is traveling to Beijing this weekend for talks aimed at preventing an all-out trade war between the world's two biggest economies. On the Chinese target list are American soybean farmers, who send about 60 percent of their exports to China.

On Friday, Klabunde, who grows corn and soybeans on 3,000 acres near Waubun, Minnesota, spent two nerve-wracking hours with a hired hand, pulling a stuck tractor out of a drainage ditch. They finally got the machine free.