Governor sent a cease and desist letter to the U.S. Immigration and Customs Enforcement agency in response to conduct that he deemed "un-American." 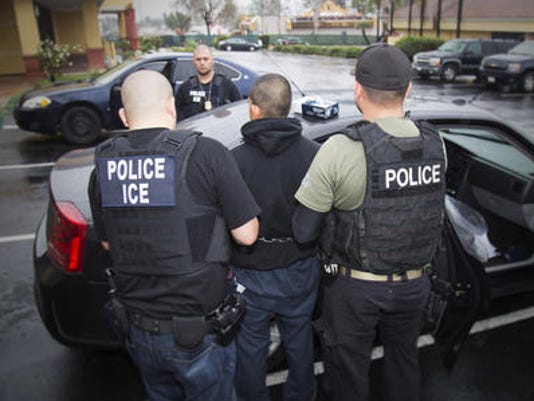 John Collins said the agents who entered his farm in Rome, New York, did not identify themselves or produce a warrant before they arrested a farm worker on charges that he unlawfully re-entered the U.S. following deportation. Collins, who said the worker has proper documentation to work in the U.S., said the officers grabbed his phone and threw it — destroying it — when he used it to videotape the arrest. Collins said he was then placed in handcuffs and threatened with arrest.

Cuomo, a Democrat, sent a cease and desist letter to the U.S. Immigration and Customs Enforcement agency on Wednesday in response to conduct that he deemed "un-American."

"We believe ICE is violating the law and endangering public safety," said Cuomo. "If they continue, the state will sue them. Period."

A spokesman for the U.S. Department of Homeland Security fired back in response to Cuomo's letter.

"Gov. Cuomo's disregard for the rule of law is a slap in the face to the hardworking men and women of ICE whose mission it is to uphold the laws Congress passed," spokesman Tyler Q. Houlton said in a statement.

According to an affidavit provided by ICE, the officers were visiting the farm in an attempt to locate a second individual when they encountered the farm worker, Marcial de Leon Aguilar. The documents say Aguilar was lawfully arrested by deportation officers, who identified themselves and had a proper warrant. ICE said it has removed Aguilar from the U.S. three times, most recently in January 2014. Aguilar was also convicted of reckless aggravated assault, a felony, according to ICE.

The incident has also prompted scrutiny in Washington, where Democratic U.S. Sen. Kirsten Gillibrand has called for an investigation.