A millennial farm boy follows in his father's footsteps

A millennial farm boy follows in his father's footsteps 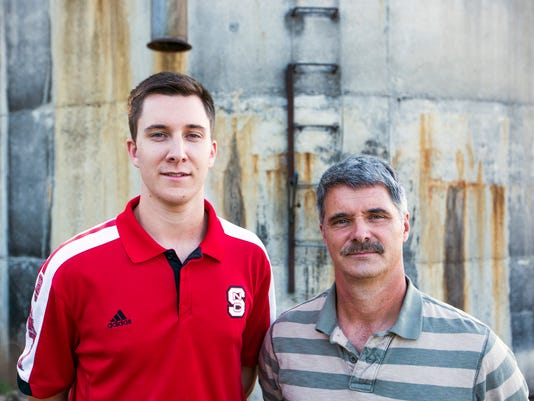 In this June 15, 2017 photo, Jonah Sykes, left, and his father, Jeff Sykes, stand for a portrait on their dairy farm in Mebane, N.C. Jonah Sykes grew up on his father's farm on Vernon Road and has decided to spend his life on that farm, to take it over and run it after his father retires.(Photo: Casey Toth, AP)

"Yeah. Mmhm, yeah. I'd like to talk. It sounds good, yeah. But I'll have to call you back. Our tractor is on fire."

Jonah Sykes, 22, is an anomaly. He grew up on his father Jeff Sykes' farm on Vernon Road and has decided to spend his life on that farm, to take it over and run it after his father retires.

"People are different in this day and time. Farming is a hard job and there are so many things out there that are pulling the people away from the farm," Jeff Sykes said. "You can make more money. You are not seven days a week. There is a different work ethic."

Like his son, Jeff Sykes thought he wouldn't stick around his own father's farm and, well, spend his life the way his own old man had.

"I remember getting up and milking with my dad. Of course, things were a lot less -things were more manual - things were less automated," Jeff Sykes said. "Of course as I grew, I said I wasn't going to work at the farm. I didn't want to work on the farm. I was going to do something else."

But, cows are Jeff Sykes' passion. He went to "vet-tech school," after which he was hired as the herdsman for the N.C. State University College of Veterinary Medicine.

"I started to think, if I'm milking cows here, why don't I just go home and milk cows?" Jeff Sykes said. "I'm the one who didn't want to stay here and now I'm the only one that's here." 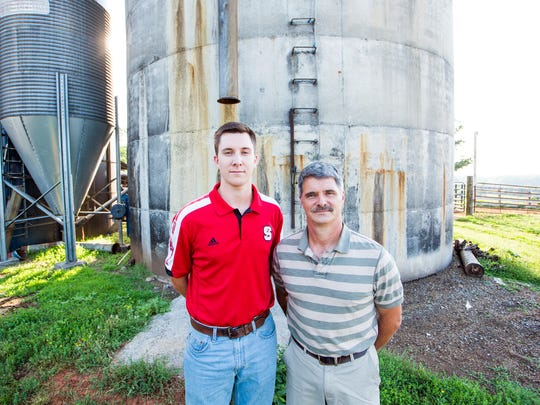 In this June 15, 2017 photo, Jonah Sykes, left, and his father, Jeff Sykes, stand for a portrait on their dairy farm in Mebane, N.C. Jonah Sykes grew up on his father's farm on Vernon Road and has decided to spend his life on that farm, to take it over and run it after his father retires. (Photo: Casey Toth, AP)

On Wednesday, Jeff Sykes was baling hay in his fields around 3 p.m. when he smelled smoke. A bearing inside his baler had given out after years of strain. The break caused excessive friction within the baling machine.

It was a hot day. A fire sparked. The hay burned easily and the field caught fire.

For a short time Jeff Sykes drove on, trying to move his machinery away from the burning ground.

Jumping off his tractor, he thought if he could calm the flames on the baler, he'd save the tractor.

He emptied a fire extinguisher. He realized the baler was lost and went to work unhitching the tractor. But a gust shot burning hay beneath the machine and it caught too.

Both machines were engulfed - lost - before Jonah Sykes made it home from his summer internship at the N.C. Cooperative Extension - Orange County Center in Hillsborough.

As a boy Jonah, alongside his brother Caleb, worked on the farm on weekends, after school and in the summer.

He liked riding the tractor with his dad, disliked waking up at 2 a.m. to milk cows at 3 a.m. and after high school went to UNC-Charlotte with no intention of returning to farm life.

"That's when I really found my passion, when I went away," Jonah Sykes said. "You are never going to get rich farming. So, one reason a lot of the younger folks don't do it, is because they are always going to be in debt."

But last Wednesday, Jonah Sykes rushed home to help Jeff Sykes. The tractor was lost. The flames died down and Jonah Sykes picked up a pitchfork and finished baling hay in the Sykes Dairy Farm fields as his dad accounted their losses.

Jonah Sykes plans to take over the family farm when his father hangs up his own boots.