'You're going to feel welcomed': Why more Latinos in the US are leaving the Catholic Church for Islam

A mosque in New Jersey is home to a growing community of Latino Muslims, many of them converts from other religions. Here's why.

'You're going to feel welcomed': Why more Latinos in the US are leaving the Catholic Church for Islam

Khadijah Noor Tanju, a native of Colombia, finds a new sense of purpose and community since converting to Islam in 2015. NorthJersey.com

UNION CITY, New Jersey – Luis Lopez battled nerves as he walked to the front of the crowded prayer hall in Union City with his son. Together, they repeated word-for-word in Arabic the Shahada, the profession of faith required to convert to Islam.

“There is no God but Allah, and Muhammad is the messenger of Allah," they declared at the mosque, located in a columned brick building that once housed a Cuban community center.

For Lopez, the conversion and embrace by the congregation four months ago brought a feeling of peace and a recognition of how far he’d come from a life that nearly ended 22 years ago in gang violence.

“They told me, ‘Come to the mosque, you’re going to feel welcomed,’” said Lopez, 41, a truck driver and former professional boxer from North Bergen.

With their religious journey, Lopez and his 21-year-old son joined a growing segment of the Latino population who are leaving Christianity for Islam. About 8% of all Muslim Americans adults are Latino, according to a 2017 report from the Pew Research Center, increasing by about a third from 2011.

In interviews, Latino converts said they are drawn to Islam because of the intense devotion to God, a simplicity in faith and focus on community that they failed to find in their former faith. But their conversion often is not easy, as they break ties with family and their Christian upbringing. 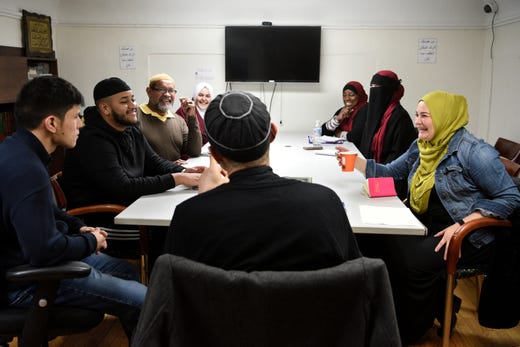 Khadijah Noor Tanju, on right, attends a da'wah class taught by Imam Mohammad Alhayek at North Hudson Islamic Educational Center in Union City on November 13, 2019. Tanju, a native of Colombia, converted to Islam in June 2015 after discovering the religion by marrying a Turkish man in October 2014, who practices Islam. AMY NEWMAN/NORTHJERSEY.COM
Fullscreen 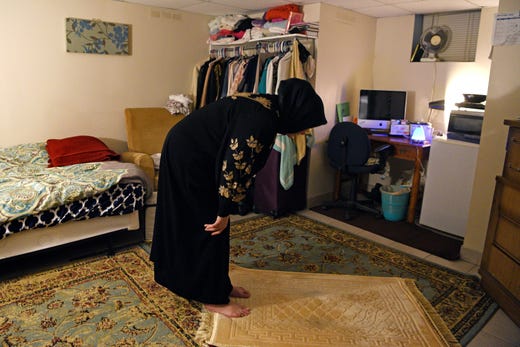 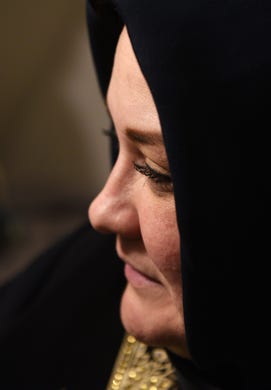 Khadijah Noor Tanju, a native of Colombia, was raised Catholic, taught at Sunday school and sang in the church choir as a child. Tanju discovered Islam after marrying her Turkish husband and converted in June 2015. AMY NEWMAN/NORTHJERSEY.COM
Fullscreen 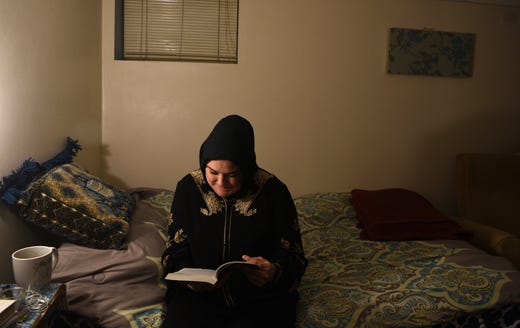 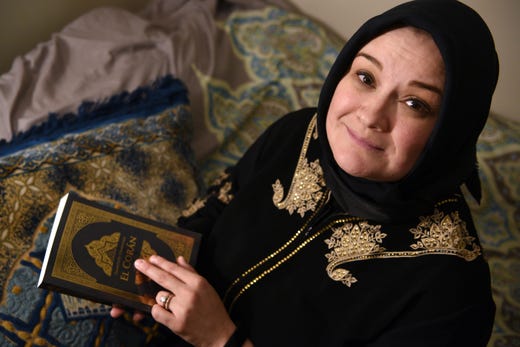 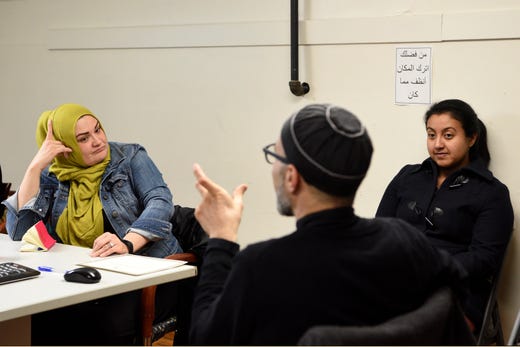 Khadijah Noor Tanju, on left, attends a da'wah class taught by Imam Mohammad Alhayek at North Hudson Islamic Educational Center in Union City on November 13, 2019. Tahju, a native of Colombia, converted to Islam in June 2015 after discovering the religion by marrying her Turkish-American man in October 2014, who practices Islam. AMY NEWMAN/NORTHJERSEY.COM
Fullscreen 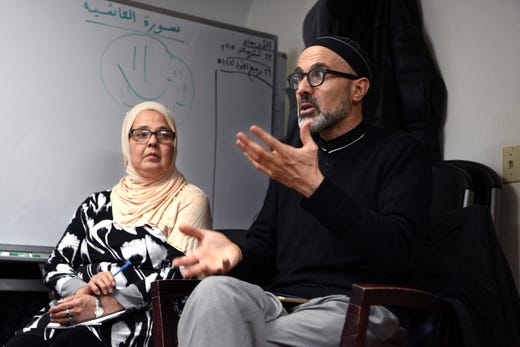 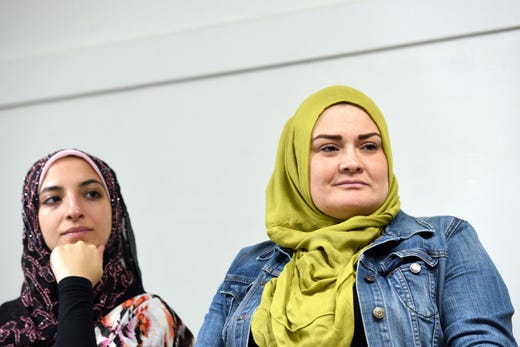 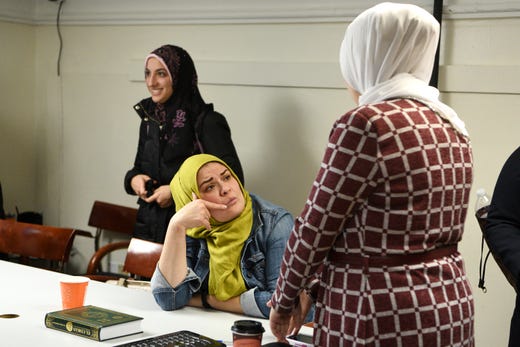 Khadijah Noor Tanju, center, catches up with a classmate in her da'wah class at North Hudson Islamic Educational Center in Union City on November 13, 2019. Tanju, a native of Colombia, converted to Islam in June 2015. AMY NEWMAN/NORTHJERSEY.COM
Fullscreen 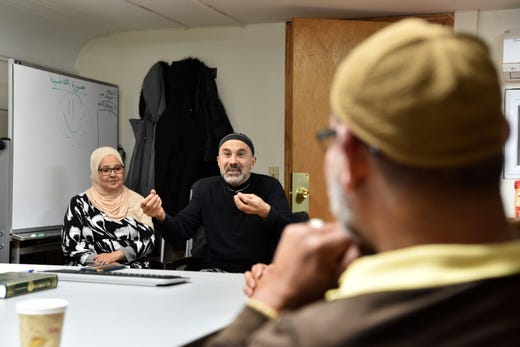 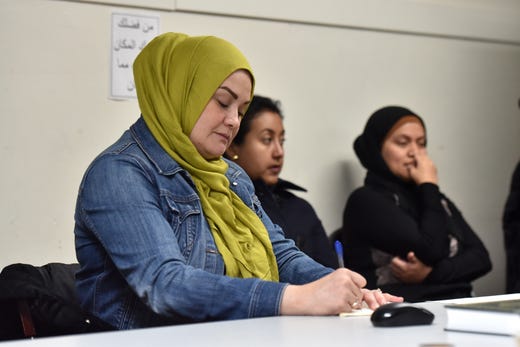 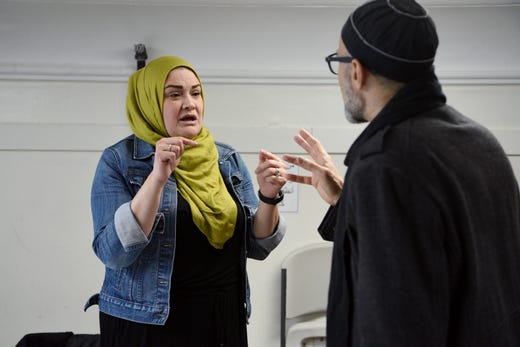 They are also choosing the faith at a time when Latinos and Muslims alike feel targeted by President Donald Trump's rhetoric and his increasingly restrictive immigration policies for both groups. Reports of hate crimes are on the rise, while Muslims bristle against their depiction in the media. Yet for some, the shared experience of living as a minority in the U.S. is a powerful attraction.

'No reason to fear’

Lopez, who moved to the U.S. from Puerto Rico as a child, sparred alongside Muslims while boxing who became close friends. Two events prompted him to change his life: a gang-related stabbing in 1997 and the birth of his son a year later.

At his friends' urging, he visited a mosque and started reading about the faith. But it was his son’s desire to convert years later that prompted him to finally make the leap.

Lopez's son, a college student also named Luis, was baptized and confirmed in the Catholic Church. While he and family members drifted away from their faith, he still felt a pull toward spiritual life. Islam appealed to him because it focused on prayers to God alone and not God and Jesus or saints, he said.

About 94% of Latino Muslims cited the desire for a more direct, personal experience of God as a reason for converting, in a survey of 560 converts reported in "Latino Muslims in the United States," a 2017 report in theJournal of Race, Ethnicity, and Religion.

“From that first day, when people stayed to see us become Muslims, that was it. They find joy in it. They are genuinely happy for people who converted,” the younger Lopez said.

They are choosing Islam at a time when bias, discrimination and hate crimes are a concern. Both father and son said they didn't believe stereotypes that painted Muslims broadly as extremists or terrorists.

"They can say what they want. There is no reason to fear because you are doing the right thing," Lopez, 21, said.

A break with tradition

But for other converts, the embrace of Islam created rifts.

Khadijah Noor Tanju, who came to the U.S. from Colombia when she was 9, clashed with family who felt she was rejecting her culture and Catholic faith. A former choir singer, Tanju, whose birth name is Carol, sang in a church choir and performed the Catholic sacrament of confirmation.

Tensions surfaced when she married a Turkish-American man and relatives made comments about Muslims as terrorists, she said. 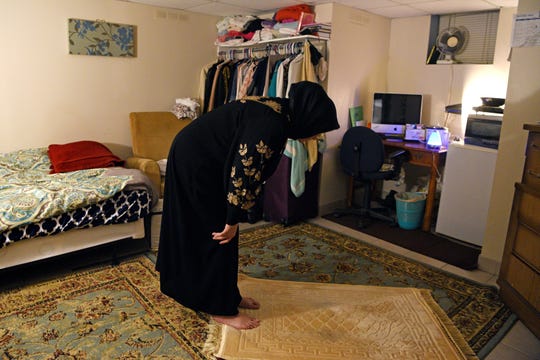 Sensing her struggles, her husband told her he would never hurt her. He was not very religious when they first met, and it dawned on her, she said, that she knew little about his faith. Privately, she began researching Islam and watching a series on YouTube about the faith.

One night, while listening to a sermon at home, she felt inspired and vowed to change her life for God. In 2015, she converted. At first, her family didn’t say much, but that changed when she began wearing the hijab, or Islamic head covering.

“My family didn’t know the implications (of my conversion), that it was a lifestyle. It was more when I started to practice Islam that they were like ‘Whoa, qué pasa aquí?’” she said, using Spanish for “what's happening here.”

Tanju had her own struggles adjusting to the faith. She started wearing the hijab because she wanted to live an authentic and pious Muslim life, she said. But publicly, she felt as if people were watching and judging her. Privately, she worried the hijab made her look unattractive.

“'Just take it off. You look ugly, disgusting, you don’t look attractive' – I kept hearing these things in my head.,” said Tanju, a teacher's aide .

She didn't know who to talk to about her worries. Later, she began attending events for new converts and volunteered at WhyIslam, a nonprofit  that teaches about the faith and has a division in Spanish. 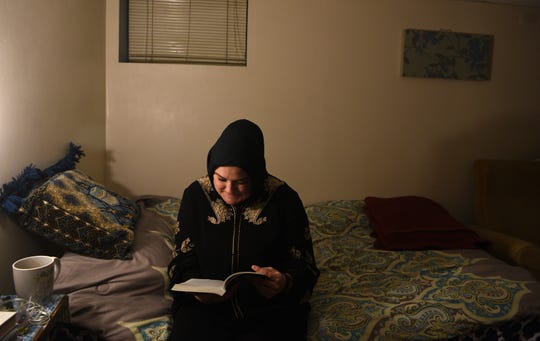 About a year ago, she started going to weekly classes at the North Hudson Islamic Education Center in Union City where Latinos make up roughly 10% of the congregation.

“I feel really happy,” she said. “I don’t feel lonely in my spiritual path."

Their backgrounds are diverse. About 56% converted from Catholicism and the rest from Protestant faiths or secular or atheist lives, according to the "Latino Muslims in the United States" report.

They differ, too, in the way they live their lives as Muslim converts. Some women wear the hijab, while others do not. Some still enjoy Christmas as a secular celebration with family, while others choose to abstain. 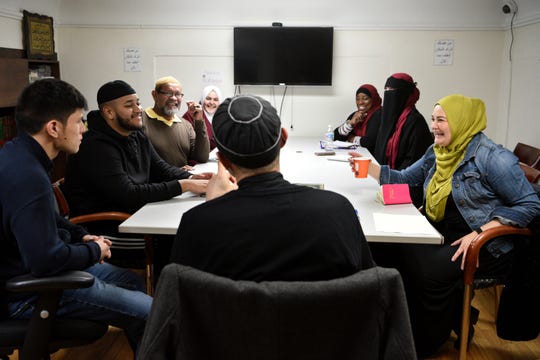 Khadijah Noor Tanju, on right, attends a da'wah class taught by Imam Mohammad Alhayek at North Hudson Islamic Educational Center in Union City on November 13, 2019. Tanju, a native of Colombia, converted to Islam in June 2015 after discovering the religion by marrying a Turkish man in October 2014, who practices Islam. (Photo: AMY NEWMAN/NORTHJERSEY.COM)

They are part of a religious shift for Latino Americans. Just under half – 47% – describe themselves as Catholic, down from 57% a decade ago, according to a Pew survey released last month. The share of Latino Protestants has remained steady at about a quarter of the total.

Fewer than 1% are Muslim, according to the survey. But that demographic has drawn attention partly because of the perception that Islam is foreign or at odds with the Latino culture typically associated with Catholicism.

But Latino Muslim groups say Islam is, in fact, part of their heritage. They say they are returning to their roots because of the nearly 800-year Moorish rule of Spain that left an Islamic influence on Hispanic language and culture.

The message is that "we're not choosing to abandon Latinx culture or embrace marginalization. We're choosing to embrace something that's already there," said Morales, who wrote the 2018 book, "Latino and Muslim in America: Race, Religion, and the Making of a New Minority."

Morales said the 2016 election cycle, marked by a rise in hate speech and bias crimes against Latinos and Muslims, led to even closer ties as the groups mobilized around issues like immigration and discrimination.

At the North Hudson Islamic Educational Center, where Lopez and Tanju pray, the number of Latino converts has increased steadily since the mosque opened in 1992, said Mohammad Alhayek, the imam, or spiritual leader, of the mosque. 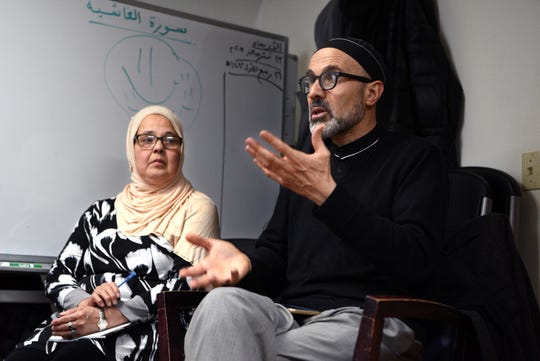 At the mosque, it's not unusual to spot a Spanish-language Quran or see empanadas served alongside foods from the Middle East at potluck dinners.

"Our vision is to share the true teachings of Islam, the guidance of Islam, with as many people (as we can) in the North Jersey Hudson area," Alhayek said. "That is our first priority and then beyond (to reach) as many people as we can."