The installations were part of the #NoKidsInCages campaign, according to Texas-based Refugee and Immigrant Center for Education and Legal Services. 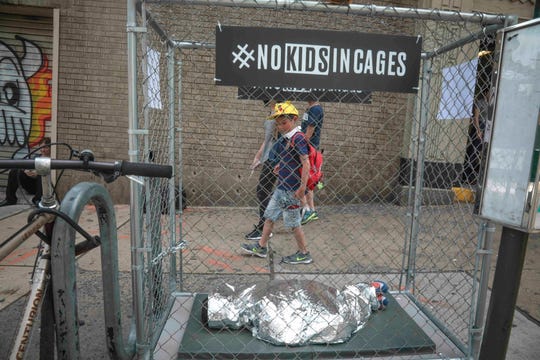 Riders leaving a MTA subway station in Dumbo, Brooklyn are greeted with a pop-up art installation promoting an immigration theme, Wednesday June 12, 2019, in Brooklyn, N.Y. Police officers responded around the city to display of cages bearing small mannequin representation of a child, a campaign called #NOKIDSINCAGES launched in support of the Texas based Refugee and Immigrant Center for Education and Legal Services. (AP Photo/Bebeto Matthews) (Photo: Bebeto Matthews, AP)

The installations were part of the #NoKidsInCages campaign, the Refugee and Immigrant Center for Education and Legal Services (RAICES), a Texas-based immigration legal services nonprofit, posted on Twitter.

An NYPD spokesperson confirmed to USA TODAY that eight of the installations were removed by Wednesday evening. The wire cages have signs with "#NoKidsInCages" on them and appear to contain "children" wrapped in foil blankets.

Guerrilla installations popped up early this morning in NYC as protest to the more than 3000 children separated from their parents at the border. This is not history. This is happening now. #NoKidsInCages is about the children. We cannot be a nation that separates families. pic.twitter.com/hiobgLftl4

The installations were called “haunting” and “disturbing” by one local television reporter. The audio included in the installations is from a recording ProPublica posted last year.

In the recording, a child can be clearly heard crying, "Papa!"

Ad agency Badger & Winters came up with the idea in support of RAICES, according to The Washington Post.

“The litmus test of any society is how it treats children. By normalizing the detention of children in cages, we’re only going further down the path of forsaking the rights of all children,” RAICES executive director Jonathan Ryan said in a statement released to The Post.

👂Sound on - An immigration installation is popping up in spots around the city. #NoKidsInCagespic.twitter.com/qSWLLX8sXt

RAICES said the installations were placed “as protest to the more than 3,000 children separated from their parents at the country's southern border.

Posts on the Twitter account for the campaign include the hashtag “PassHR541” in reference to the “Keep Families Together Act,” which was introduced in January. The bill aims to stop agents or officers from separating a child from his or her legal guardian "at or near the port of entry or within 100 miles of a border of the United States."

New York-based TV station PIX11 reported there were 24 installations when people began noticing them early Wednesday. They were placed in high-traffic areas and in front of media organizations including Google, Newsweek, BuzzFeed and NBC.