The officer faces a charge of contacting a minor to commit a felony, and is currently on paid administrative leave.

Snapchat's new photo filter that allows users to change into a man or woman with the tap of a finger is not necessarily fun and games for transgender people. (April 20) AP Domestic

Posing as a woman named Esther on the dating site Tinder, Ethan – the student, who did not give his last name for fear of retaliation – found his match with Robert Davies, 40, a police officer with the San Mateo Police Department.

"I believe he messaged me, 'Are you down to have some fun tonight?' and I decided to take advantage of it," Ethan told NBC Bay Area.

He had embarked on this journey to catch possible pedophiles after a friend had confided that she had been sexually molested as a child.

Davies was arrested on one count of contacting a minor to commit a felony and is on paid administrative leave.

“This alleged conduct, if true, is in no way a reflection of all that we stand for as a Department, and is an affront to the tenets of our department and our profession as a whole," said San Mateo police chief Susan Manheimer in a statement to USA TODAY.

FacebookTwitterGoogle+LinkedIn
Snapchat through the years
Fullscreen 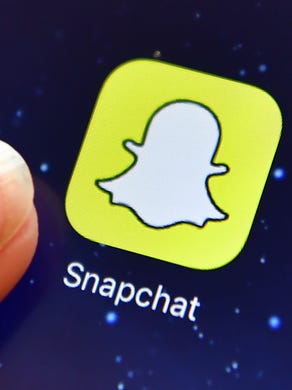 Snap Inc., the parent company of Snapchat, the company behind snapchat debuts on the New York Stock Exchange on March 1, 2017, under the ticker symbol SNAP. Shares are expected to price March 1 after the market closes and begin trading on Thursday. Snap is aiming to sell shares around $14 to $16 a share, giving the company a valuation of up to $22.2 billion. Carl Court, Getty Images
Fullscreen

In this Thursday, Oct. 24, 2013, file photo, Snapchat CEO Evan Spiegel poses for a photo in Los Angeles. Snap Inc. is listing the company's valuation at up to $22 billion as it prepares for the tech industry's biggest initial public offering in years. The parent company of SnapChat said in a regulatory filing Feb. 16, 2017, that the IPO is likely to be priced between $14 and $16 per share. Jae C. Hong, AP
Fullscreen

A logo for Snapchat hangs on the front of the New York Stock Exchange in New York on Nov. 17, 2016. JUSTIN LANE, EPA
Fullscreen

This April 29, 2014 file photo shows Snapchat co-founders Evan Spiegel and Bobby Murphy attending the Time 100 Gala, celebrating the Time 100 issue of the Most Influential People In The World at Jazz at Lincoln Center in New York. After a dearth of technology listings in 2016, Snapchat parent Snap is set for its market debut as early as this week. The initial public offering (IPO) if successful could presage a wave of listings from the sector's so-called "unicorns" -- those with a valuation of at least $1 billion based on private funding sources. TIMOTHY A. CLARY, AFP/Getty Images
Fullscreen

A long line of attendees wait to be interviewed at the SnapChat booth at the TechFair LA. Robert Hanashiro, USA TODAY
Fullscreen

In this Monday, Nov. 28, 2016 photo, a vending machine containing Spectacles stands in a closed store, in New York. Snap is managing to remain hip and even has an unconventional distribution strategy for Spectacles, $130 sunglasses that take video for sharing on Snapchat. Users can't just order one online yet. Rather, they have to find a vending machine or temporary store popping up with just 24 hours' notice. So far, vending machines have showed up near the company's headquarters in the Venice Beach section of Los Angeles, as well as in Big Sur, California, and New York. Mark Lennihan, AP
Fullscreen

In this Tuesday, Nov. 29, 2016 photo, customers cover up under umbrellas as they wait to purchase Spectacles, in New York. Mark Lennihan, AP
Fullscreen

The Snapchat app came under fire in April 2016 after it released a filter critics said amounted to a digital version of blackface. The filter attempted to honor late reggae icon Bob Marley by letting users take a selfie in Snapchat and then altering the image to make the user look like Marley, complete with dreadlocks, a colorful hat and brown skin. Snapchat
Fullscreen

The logo and a page of mobile app 'Snapchat' are displayed on tablets on January 2, 2014 in Paris. Lionel Bonaventure, AFP/Getty Images
Fullscreen

The Snapchat logo is seen at the front entrance of the company's new headquarters on November 14, 2013 in Venice, Calif. Kevork Djansezian, Getty Images
Fullscreen