Temporary protected status: Why Haitians are being kicked out

The Trump administration has determined the temporary residence status prompted by the devastating 2010 earthquake is no longer needed.

Temporary protected status: Why Haitians are being kicked out

The Trump administration said Monday it is ending a temporary residency permit program that has allowed almost 60,000 citizens from Haiti to live and work in the United States since a 2010 powerful earthquake shook the Caribbean nation. 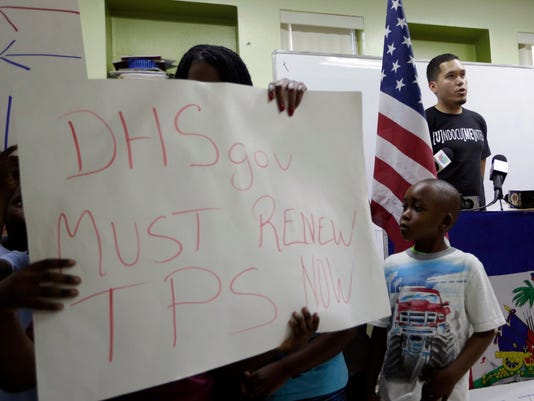 Almost 60,000 Haitians face removal from the United States because the Trump administration has determined a temporary residency program prompted by the devastating 2010 earthquake is no longer needed.

Haitians living in the U.S. under "temporary protected status" have until July 2019 to gain a different, legal immigration status or leave, Acting Secretary of Homeland Security Elaine Duke said.

What is temporary protected status?

Temporary protected status is offered to legal U.S. residents and undocumented immigrants when war, natural disaster or other "extraordinary" conditions temporarily make return to their native country unsafe. The foreign nationals can obtain work documents, but the status does not "lead to lawful, permanent resident status."

Do immigrants from other countries have the status?

Has the Trump administration ended the status for other nations?

Duke announced two weeks ago that the program affecting thousands of Nicaraguans in the U.S. would end in January 2019. The status for Sudan ended in September and goes into effect next year.

What happened in Haiti that resulted in the status?

The magnitude-7.0 earthquake that rocked the Western Hemisphere's poorest nation in 2010 killed more than 200,000, left hundreds of thousands more Haitians homeless and destroyed most of the tiny island nation's infrastructure. The Obama administration granted the status, which has continued to be extended.

Why has the status ended for Haiti?

Duke says the number of displaced people in Haiti has decreased by 97%. "Significant steps have been taken to improve the stability and quality of life for Haitian citizens, and Haiti is able to safely receive traditional levels of returned citizens," she said in a statement Monday. "Haiti has also demonstrated a commitment to adequately prepare for when the country’s TPS designation is terminated."