In this July 1, 2019, photo, Larry Ness puts spring planting equipment into storage at their farm near Comstock, Minn. The Ness family fears they will be forced to leave the farmstead where the family has lived since 1942. (Photo: Dan Gunderson, AP)

COMSTOCK, Minn. - The latest challenge to the controversial Fargo-Moorhead flood diversion project is raising a glimmer of hope for upstream residents who could lose land if the plan moves forward unchanged.

The board of Buffalo-Red River Watershed District denied a necessary permit for the $2.75 billion project and is contesting another permit that the Minnesota Department of Natural Resources granted, which allows construction of a dam and a 30-mile diversion channel around Fargo, North Dakota. Upstream opponents hope the permit will be found invalid by an administrative law judge and changed to reduce upstream impact.

The Ness family has lived a few hundred feet from the Red River near Comstock since 1942. The river has never reached their farmstead, not even during the record-setting floods of 2009.

He grew up here, on the edge of about 100 wooded acres along the river 20 minutes south of Moorhead — and he took over the farming operation from his dad in 2008. He wants his kids to be able to grow up here, too.

"We think it's a pretty neat and unique area and you're not going to replicate anything like this," Ness said.

His retired parents still live in the farmhouse, but he always expected to move his family here someday. Now he's not sure if that can ever happen. 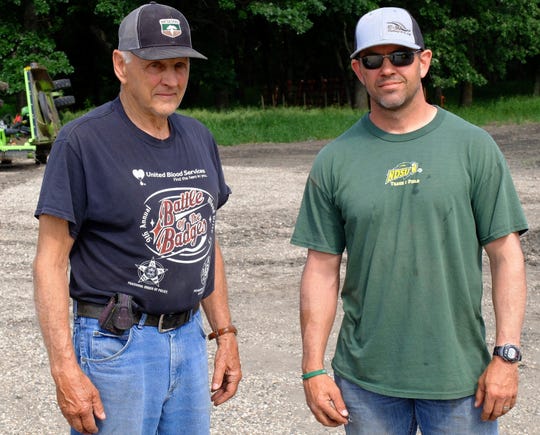 In this July 1, 2019, photo, Larry Ness, left, and his son Matt pose for a photo on the family farm where Larry has lived his entire life on near Comstock, Minn. The Ness family fears they will be forced to leave the farmstead where the family has lived since 1942. (Photo: Dan Gunderson, AP)

The family farmstead will disappear under the current plans for the Red River flood diversion. It's located in an area that would be used to temporarily store floodwaters when the diversion is operated during a major flood.

"It's not just a monetary loss, it's more of an emotional loss, with the memories and ties to the farmstead," Ness told Minnesota Public Radio News.

The impending project is always in the back of his mind, Ness said, causing sleepless nights, anger and frustration.

"If you think about it too much from our standpoint, it can really get to you," Ness said. "So sometimes, right or wrong, we try to block it out to a certain extent so you can go on living without thinking about it every day."

The Ness farmstead is one of dozens of rural homes on a buyout list in the area upstream and south of the Fargo-Moorhead metro area. Many of the homes — and much of the farmland — on the list are on slightly higher ground than the sparsely developed southern reaches of Fargo. Diverting floodwaters here before they reach the metro is part of the project's strategy, to protect those areas for future development.

The Ness family has not received an official buyout offer yet, but that could come sometime this summer, as the Fargo-Moorhead Diversion Authority — the local government partnership managing the project — focuses on land acquisition ahead of construction. Ness is still hopeful the new challenges to the project will bring changes that allow his family to stay.

"We're kind of being forced out for future development in south Fargo. And that's kind of the sore subject for everyone: Why (do) we have to sacrifice our higher ground that doesn't flood for lower ground for future growth?" Ness said. 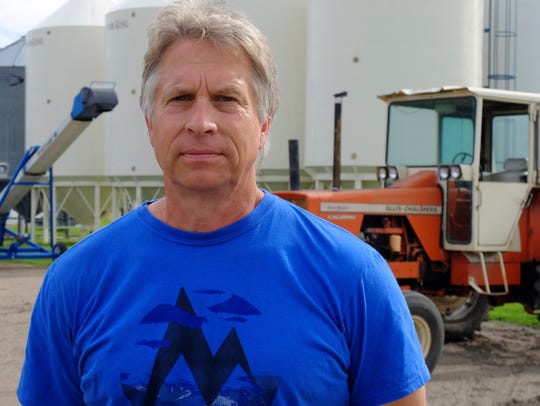 In this July 1, 2019, photo, Mark Askegaard poses for a photo at organic farm farm about 3 miles from the Red River, also near Comstock, Minn. Askegaard opposes the proposed Fargo-Moorhead diversion project, which would flood some of the land where he grows organic crops. (Photo: Dan Gunderson, AP)

A project like this is certain to have impacts, no matter how hard its designers try to minimize them: The water has to go somewhere. And that tension between protecting land near Fargo and flooding farmland in Minnesota was a key reason the state of Minnesota initially denied a permit for the Fargo-Moorhead diversion project in 2016. The DNR said the initial plans for the project protected too much low land near Fargo and shifted flooding to Minnesota land that had never before flooded.

A revised Plan B, which the DNR approved in 2018 and is now the working plan for the project, reduced the Minnesota impact. But landowners south of Fargo-Moorhead still think it shifts too much flooding to land that has never, as far as anyone can remember, flooded.

Ness raises crops on about 2,500 acres here. If the current plan moves forward, not only will he lose his family farmstead, but most of his land will also be flooded any time the diversion is used — during significant flooding on the Red River, which is most likely to happen during the spring, just before planting — adding a perennial uncertainty to his farming operation.

The flood diversion planning process has left his farm operation in limbo since 2009, Ness said, and it's made long-term decisions about the future of the farm, such as building new grain storage or other buildings on the land, nearly impossible to make.

"This thing's been going on (for) almost 10 years, and there's been many changes," he said. "Obviously there's still pending lawsuits. So we're (in) kind of a wait-and-see mode until we know for sure what's going to happen, and I don't know when that's going to be. Is it a year? Is it five years? Ten?"

The Fargo-Moorhead Diversion Authority has emphasized it is committed to fair compensation for all affected landowners, but that's little solace for people with generations invested in the land.

Askegaard runs an organic farm a few miles down the road from the Ness farm, and they're good friends. His ancestors established the family farm about 3 miles from the Red River, also near Comstock.

Under the first, now-defunct design, the Askegaard farmstead would have been in the diversion's floodwater storage area, where the Ness farm is now. In the revised Plan B, his home is protected, but a levee would cross his farmland, and some of his fields would be flooded when the diversion is activated, threatening their organic status.

He's also concerned the land will decrease in value if this current plan moves forward, because now it's subject to flooding, when it hadn't flooded before. That means less tax revenue for local governments and, as families move away, fewer people supporting churches and local businesses.

"What's it going to do to our area? Is it going to be an economic dead zone?" Askegaard wondered. "I think the primary impact is to our greater overall community. You know, it's not just an impact to my farm. It's an impact to our whole area, our community, our church or our school district."

Askegaard said he's not opposed to flood protection for the Fargo-Moorhead metro area, but he's holding onto hope that a challenge of the Minnesota DNR permit for the project will ultimately reduce the impact on upstream landowners, by downsizing the current diversion.

The Red River diversion project is the subject of a pending federal lawsuit, and a Minnesota administrative law judge is reviewing the DNR permit for the project. Federal judge John Tunheim has ruled some work in the project can proceed, and contractors began digging the diversion channel inlet last month.