Overuse of fertilizer is an indication that voluntary methods to protect groundwater are not enough in Minnesota, officials say. 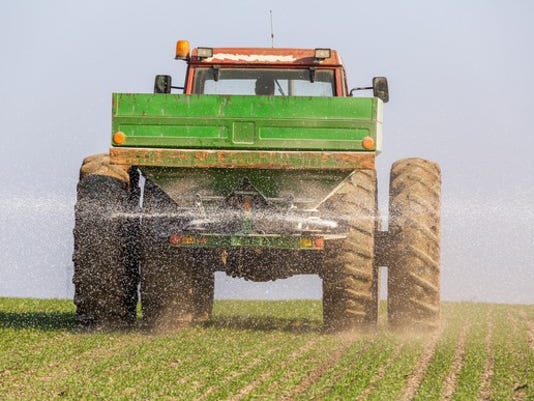 MINNEAPOLIS, MN - Farmers in Minnesota are using 10 to 15 percent more fertilizer than they need to maximize crop yields, one reason why drinking water across the state is increasingly contaminated with nitrogen, state agricultural officials say.

They say it’s also a clear indication that the voluntary methods that the state has relied on for decades to protect groundwater are not enough.

That is the incentive behind the state’s first ever proposal to regulate farmers’ use of fertilizer, Minnesota Department of Agriculture officials said Tuesday as they made public the final version of a proposed regulation that has become a sore point between Governor Mark Dayton and Republican legislators.

Dayton has promised to veto two bills that would give lawmakers control over fertilizer management, proposals that Republicans say are necessary because of the lack of trust that has developed between the administration and farmers.

Meanwhile, Dayton’s administration is moving forward with its proposed regulation, which has been years in the making. It will be published in the Federal Register on April 30, setting off an 80-day period for public comment.

Minnesota officials say voluntary methods that the state has relied on for decades to protect groundwater are not enough, prompting a proposal that would regulate farmers’ use of fertilizer. (Photo: Getty Images)

Starting in July, five hearings will be held across the state by an administrative law judge, who will determine whether the proposed regulation is necessary and reasonable. It could become law by the end of the year.

Despite the legislative controversy, several leading farm and environmental groups that had been critical of earlier versions of the proposal said they could live with it as it is currently written.

The proposal calls for local, farmer-led advisory groups to identify and encourage voluntary measures to limit fertilizer use without sacrificing yields. Mandatory measures would kick in several years down the road if most farmers don’t do as much as they can on their own.

Kirby Hettver, president of the Minnesota Corn Growers Association, said that nitrogen is an essential ingredient for corn — that crop alone uses 70 percent of all nitrogen fertilizer sold in the state. But, Hettver acknowledged, groundwater contamination “is a legitimate concern, and we need to be part of the solution.” The proposed regulation is a reasonable approach, he said.

Environmental groups said that while the measure doesn’t go nearly far enough to fulfill the state’s responsibility to protect all groundwater, and not just drinking water, it is a start. They also said the latest version now includes language that gives the agricultural commissioner greater latitude in forcing solutions to protecting water.

“This is a good step,” said Steve Morse, executive director of the Minnesota Environmental Partnership. “It’s a modest step, but it sets up a good framework.”

The current proposal is designed only to protect community drinking water systems. It applies to regions of the state where soils are vulnerable to leaching, and it includes about 30 communities where nitrates are high or rising and where the drinking water is used by about 100,000 people. The state agriculture department considered, and then at the urging of farm interests rejected, a plan that would also cover private homeowners’ wells in rural townships.

Including those wells would have been very expensive. By focusing on towns, the state would affect the greatest number of people, thereby making the most significant impact on public health, officials said in documents published with the proposal.

Instead, the agricultural department will continue to support well testing and voluntary efforts by farmers to protect homeowners with private wells.

The agriculture department also reduced the number of acres in the state where groundwater is susceptible to contamination, again at the urging of farmers who said the original maps were not accurate. Hettver said that the latest version of the proposal is much improved but might still need vetting by farmers. The agriculture department has posted the maps on its website so farmers can see precisely how their land has been categorized.

“A lot of our concerns have been addressed,” said Thom Petersen of the Minnesota Farmers Union. “A lot of farmers can work within the rule.”

But many Republican legislators can’t, and are pushing two bills to undercut the state’s authority. The House of Representatives passed one of the bills last week, and the Senate is expected to vote on the other.

Rep. Jeff Backer, R-Browns Valley, sponsor of the House bill, said that the Legislature should have the power to review the state’s final proposal because the agriculture department has not considered all possible sources of nitrogen, including the metro area and feces from wildlife.

Agriculture, he said, is not the cause of the problem. “I don’t believe it is,” he said.
Bobby King, policy director of the Land Stewardship Project, a nonprofit that supports family farms and sustainable agriculture, said that the state needs to retain its authority to regulate farmers.

“We have a water-quality crisis in rural Minnesota, and we don’t want to weaken the state’s ability to respond to that,” he said.