Warrant issued for arrest of Michigan man on charges of animal cruelty. 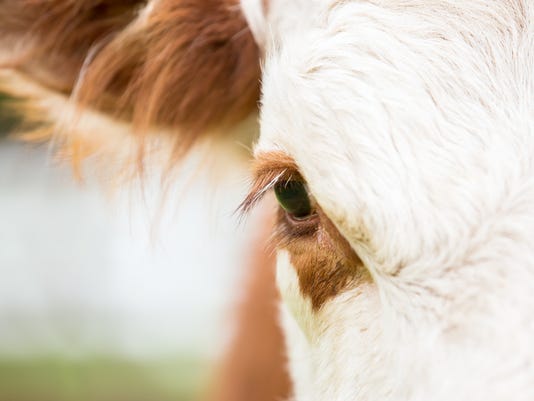 Close-up view of a brown and white Hereford cow's eye. No specifics, including breed, were available on approximately 70 cows found dead in Livingston County, but a 61-year-old man is facing felony charges of animal abuse/neglect in connection to the animals.(Photo: emholk, Getty Images/iStockphoto)

Authorities in Michigan seek charges against a man after 70 dead cows were found on his property earlier this year.

A warrant has been issued for 61-year-old Keith Edwin Huck Jr., who could face up to four years in prison on animal cruelty charges. He also faces misdemeanor charges related to failing to bury animals and failure to license a dog.

Livingston County (Michigan) Prosecutor William Vailliencourt said the animal cruelty charges are “based on allegations that the defendant failed to provide adequate care to cows and pigs.”

It was not clear when the animals were discovered, but court records indicate Livingston County Animal Control may have begun the investigation in May.

Vailliencourt said he was unable to disclose other details while the case is pending.

“The charges are simply allegations at this point and the defendant is presumed innocent unless and until proven guilty,” Vailliencourt said.