Plans for Tyson processing plant get shut down in Kansas bedroom community.

FILE - In this Sept. 15, 2017 file photo, a couple walk across the street to Chieftain Park, where a rally in opposition of a Tyson Foods Inc. plant being built near the town was held, in Tonganoxie, Kan. Tyson Foods planned to build a $320 million chicken-processing plant but residents opposed to the plant drove the company away. Two weeks after the early Sept. 2017 announcement, local officials withdrew their support and Tyson started looking elsewhere.(Photo: Chris Neal, AP)

TONGANOXIE, KS - When Shannon Reischman takes in the sweeping view from the big hill behind her in-laws' farmhouse outside the northeastern Kansas town of Tonganoxie, she sees a rural oasis that's an easy commute to Kansas City-area jobs. 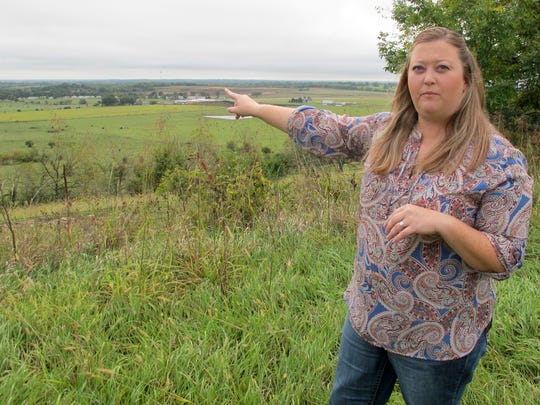 In this Tuesday, Sept. 26, 2017 photo, Shannon Reischman, points to the site of a proposed Tyson Foods Inc. chicken-processing plant from a hill behind her in-laws farmhouse outside Tonganoxie, Kan. She and other residents mobilized against the project, and the company is now looking elsewhere. (Photo: John Hanna, AP)

Tyson Foods Inc. looked at the bedroom community of about 5,300 people and saw a good place to build a $320 million chicken-processing plant. And when the Springdale, Arkansas-based agribusiness giant announced its plans in early September, residents such as Reischman were quick to mobilize. But they weren't on social media to court the company. They used their posts to organize protests to drive Tyson away.

Industry and state officials are a bit mystified that any community would turn away 1,600 jobs. Kansas is still trying to attract the plant, but in another town.

FILE - In this Sept. 15, 2017 file photo, people fill the grass at Chieftain Park, where a rally in opposition of a Tyson Foods Inc. plant being built near the town was held, in Tonganoxie, Kan. Tyson Foods planned to build a $320 million chicken-processing plant but residents opposed to the plant drove the company away. Two weeks after the early Sept. 2017 announcement, local officials withdrew their support and Tyson started looking elsewhere. (Photo: Chris Neal, AP)

She and her neighbors see their already growing community as economically stable enough. They didn't want it overcome by environmental problems, newly crowded schools and heavy truck traffic.

Reischman said she was sure that from the big hill with the countryside view, her family would be able to smell the Tyson operation, but, "That's honestly the least of our concerns."

The lesson for Tyson, state officials and the meat-processing industry was that they haven't been active enough in recent years in defending the industry and the economic benefits of value-added agricultural development. They said the internet gives opponents of projects easy access to negative information and an ability to spread it much more quickly than in the past.

"Oftentimes, we allow the activists to dictate the playing field, and then we kind of react to it," said Chris Young, executive director of the American Association of Meat Processors.

FILE - In this Sept. 15, 2017 file photo, a long line of people wait to pick up their "No Tyson in Tongie" signs during a rally in opposition to a Tyson Foods Inc. plant being built near the town, in Tonganoxie, Kan. Tyson Foods planned to build a $320 million chicken-processing plant but residents opposed to the plant drove the company away. Two weeks after the early Sept. 2017 announcement, local officials withdrew their support and Tyson started looking elsewhere. (Photo: Chris Neal, AP)

Tyson says it's looking to build its first chicken-processing plant in more than 20 years to keep up with consumer demand. Company and state officials believed thousands of workers in the area would find the starting pay of $13 to $15 an hour attractive and say critics are overstating the potential environmental and community problems.

Tonganoxie's opposition followed similar resistance last year to a proposed Prestage Farms hog-processing plant in Mason City in north-central Iowa, and a Lincoln Premium Poultry chicken-processing plant in Nickerson, Nebraska, outside Omaha. In those cases, each company chose a new location in the same region after resident protests.

A big part of the problem in Tonganoxie was the secrecy surrounding Tyson's plans, which bred skepticism and increased residents' anger. Reischman and others said they found out about the project on TV the night before the announcement.

Tyson and state and local officials had been quietly working together for weeks on what was code-named "Project Sunset." State Department of Agriculture spokeswoman Heather Lansdowne said state officials assumed that local leaders being receptive to the project reflected residents' view.

In this Tuesday, Sept. 26, 2017 photo, a sign expressing opposition to a proposed Tyson Foods Inc. chicken-processing plant sits in a field outside Tonganoxie, Kan. Residents were quick to mobilize and used their posts to organize protests to drive Tyson away. (Photo: John Hanna, AP)

Gov. Sam Brownback and Lt. Gov. Jeff Colyer were involved in efforts to attract the plant to Kansas at least by mid-June, their office calendars show.

Tonganoxie-area resident Jen Peak, a leader of the anti-Tyson group, questioned whether Tyson and state officials grasped that the community is economically strong enough to be selective about development.

It is home to an orthopedic shoe manufacturer, a firm that helps develop medical devices and an outdoor paving-stone maker.

"The entire community was just underestimated," the 40-year-old Peak said. "I guess this is a lesson to them, going forward, to know the area that you're trying to move into."

Nondisclosure agreements during negotiations with local and state officials are common for a publicly traded company such as Tyson, company spokesman Worth Sparkman said.

Brownback has since acknowledged that leaders of any Kansas community wanting to attract the plant moving forward "need to step up publicly."

"I think that's a better way to go at it," the Republican said.

Tyson is now eyeing three potential sites — in Sedgwick County in the Wichita area, in Cloud County in north-central Kansas, and in the southeastern Kansas town of Coffeyville. All are at least 130 miles (210 kilometers) from Tonganoxie.

Local leaders in those communities have publicly confirmed they're pursuing the plant. There's opposition in Sedgwick County, where residents have mobilized through a Facebook group.

The Tonganoxie project's opponents mobilized quickly through social media. Within two days of the plant announcement, an anti-Tyson group on Facebook had 3,400 members — several hundred more people than the total registered voters inside the city. Between 2,000 and 3,000 people attended a town hall meeting that prompted area legislators to announce their opposition.

Opponents said because Tonganoxie is a Kansas City-area bedroom community, it's not desperate for jobs paying $13 to $15 an hour. Leavenworth County's median household income of nearly $64,000 is about 22 percent higher than the state's.

In this Tuesday, Sept. 26, 2017 photo, Kirk Sours, the manager of the Tailgate Ranch, discusses his opposition to a proposed Tyson Foods Inc. chicken-processing plant near the cattle ranch outside Tonganoxie, Kan. Opponents of the project mobilized to block it, prompting the company to look for another site. (Photo: John Hanna, AP)

Tonganoxie's population has nearly doubled since 2000.

"Professionals live out here that have their jobs and their companies and their careers," said Kirk Sours, longtime manager of the Red Angus cattle-raising Tailgate Ranch outside Tonganoxie. "This location is a perfect commuting distance for those folks."

While the possibility that immigrants would fill the jobs fueled opposition in the Nebraska chicken-processing plant fight, critics of the Tonganoxie project said they weren't concerned about who would do the work but whether their pay would be enough to justify the potential problems.

"If someone was going to come in and build a factory and pay 30 bucks an hour, I don't think you'd have much resistance," said Eric Thompson, director of the Bureau of Business Research at the University of Nebraska-Lincoln.