UAV pilots Jared Langley, 31, and Cory Vinger, 24, work together to fly a FreeFly ALTA 8 octocopter in Grand Forks N.D. This drone can carry everything from high-resolution cameras to thermal imaging equipment, flying on pre-programmed inspection routes for 20 minutes at a time.(Photo: Trevor Hughes, USA TODAY)

One of the nation's most rural states, North Dakota has quickly become one of the leading spaces for drone research, experimentation and testing.

Space, of course, is the key word, since the sparsely populated state (pop. 760,000) has plenty of room to fly. Farmers in particular see the drones as valuable tools to monitor the state’s 39 million acres of agricultural land spread across 30,000 farms.

The drones being flown in North Dakota are often far more sophisticated, expensive and heavier than the ones consumers can get from Best Buy. They have sensors that “see” in the infrared spectrum and have far greater flight times and maneuverability.

The sensors are already so good that farmers can count exactly how many cornstalks are growing in a single acre, allowing them to save money on fertilizer and fuel, which keeps food costs low.

It’s a far cry from the kinds of the scenic shots hobbyists take.

Federal aviation officials closely restrict where and when most people can fly drones for commercial purposes. But portions of North Dakota received a special waiver giving pilots there much broader latitude, allowing some of them to use drones at night to search for murder suspects and fly beyond the pilot’s line of sight.

Goldman Sachs estimates the worldwide drone industry could be worth $100 billion in the next two years as consumers, governments and businesses adopt and adapt.

“This industry is moving at the speed of technology, not bureaucracy,” said Nick Flom, director of the Northern Plains Unmanned Aircraft Systems Test Site in Grand Forks. “We want to get to a point where a farmer wakes up, pushes a button, and by the time he’s drinking his coffee, knows exactly what areas he needs to fertilize.”

Federal drone rules are designed to reduce the potential conflicts between drones and piloted aircraft and also reduce the risk if a drone comes crashing out of the sky while developers are testing new flight-control software or batteries. 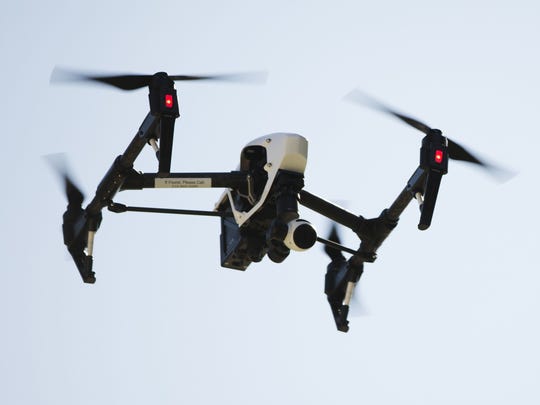 Drones are fast becoming an integral tool on farms and ranches across the U.S. (Photo: Matt Rourke, AP)

North Dakota’s wide open spaces mean drone pilots risk only crashing into a soybean or wheat field, rather than a populated neighborhood.

The Northern Plains test site is one of only six nationwide, and drone companies range from one-pilot operations up to defense contracting giant Northrop Grumman, which opened a test site at Grand Sky this spring.

The state also benefits from military use of drones deployed around the world but remotely piloted by National Guard pilots and sensor operators in Fargo and Grand Forks. The same pilots and sensor operators who fly Reapers and Global Hawks during their military service are helping develop civilian applications to plan automated flights and make batteries last longer.

But much of the technology is home-grown here in North Dakota, from the companies inspecting wind turbines (faster than sending someone to climb the towers and cheaper than helicopters) to the power-line surveyors (who can monitor power lines in the dark during floods.)

College students are figuring out how to use electromagnets to help drones "perch" on bridges so they can save battery power and help farmers monitor crop health.

At times, even the drone experts setting the pace find themselves shaking their heads.

“It’s weird to think we are the experts in this field — we are all so young and have so much of the expertise,” said Lemler, 27, who started flying drones as a student at the University of North Dakota, where she graduated with three degrees.