In this July 7, 2017 photo, Brad Burbrink keeps an eye on the swath of his sprayer visually and with the aid of a spraying program as he tends to one of BE N AG's fields near Blackhawk, Ind. Nearly every day, two semi-loads of food-grade corn leave the BE N AG Family Farm from southern Vigo County en route to an Azteca milling site in Evansville.(Photo: Joseph C. Garza, AP)

TERRE HAUTE, Ind.- It's quite possible that shoppers buying corn chips can trace those chips back to Vigo County.

That translates into a lot of corn chips.

Sold under the Mission Brand name, the corn chips can be found at stores such as Walmart.

It's all part of a family effort that oversees 5,000 acres of farm land production, with nearly 80 percent of corn produced being food-grade quality. The farm also produces 150,000 bushels of soybeans, which when sold, likely hit the world market, where China is a huge importer of U.S. soybeans.

In a November 2016 edition of the World-Grain.com, the publication cited Bill Lapp, president of Advance Economic Solutions.

"China is so important — they are the dog and we are the tail — whether we realize it or not," said Bill Lapp, president of Advance Economic Solutions in Omaha, Nebraska. "During the past crop year, their monthly imports of about 7 million tons are the equivalent of what Indiana produces. So in a given month, they are taking the entire crop of the state of Indiana," World-Grain.com reported. 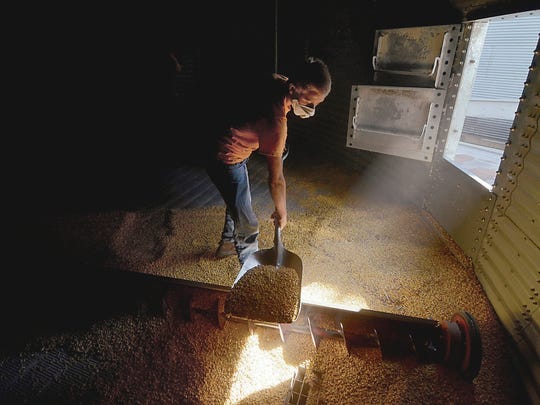 In this July 7, 2017 photo, Evan Burbrink, 14, shovels corn into a vent as he and his father, BE N AG, co-owner Brad Burbrink, work together to clean out the grain bin at the farm in southeast Vigo County near Blackhawk, Ind. Nearly every day, two semi-loads of food-grade corn leave the BE N AG Family Farm from southern Vigo County en route to an Azteca milling site in Evansville. Sold under the Mission Brand name, the corn chips can be found at stores such as Walmart. (Photo: Joseph C. Garza, AP)

The BE N AG farm has hosted visiting agribusiness people from China, giving a tour of their farming operations.

"Three years ago, we hosted a group of Chinese young people who were grain buyers and marketing people in China," said Marty Evans, who started the family farm business. "They toured the farm and looked at crops. They tried to understand what we do. They are our customers and are the buyers of our soybeans.

"I do most of marketing for most of our farms," Evans said. "I take different newsletters and read a lot about world markets and crops throughout the U.S. That determines our market, on what we will get so we can figure out when to sell. Agriculture is a risk management business," he said.

The family farm began in 1998, with Marty, and wife Becky, Evans farming 1,000 acres of land, after selling an independent fertilizer/chemical business. Marty became a first generation farmer. Brad Burbrunk is a fourth generation farmer. He grew up on a family farm in Seymour. He met his wife, Amber, a daughter of Marty and Becky Evans, at Purdue University.

In 2005, the BE N AG partnership was created, with the Evans, Burbrinks and with another Evans offspring -- son, Casey, and his wife, Lynsey. And recently, 14-year-old Evan Burbrink, Brad's son, has been helping on the farm.

Additionally, Evans' daughter, Jamalyn, and her husband, Tim Sarver, are part of the partnership and help on the farm, but also oversee a separate business of Legacy Seeds, as well as Legacy Ag Solutions, a business also owned by the overall partnership.

The family farms land within a 15-mile radius of the BE N AG family farm office location on Louisville Road, which includes storage bins. The farm is a true agribusiness, as family members do not live on the farm office/storage site, as each have homes about 1 1/2 miles to the west.

"This is our business. It's what we do everyday," Evans said.

"Agriculture has changed so much from grandma and grandpa's day, it is a business and you have to treat it like a business to survive," Burbrink said. "We are a business like any other business."

While a business, the farm is also a family undertaking.

"I don't know that there is much that I don't like about farming," Casey Evans said, as he is the family's second generation of farmers. "I get to work with family and raise our kids in the family."

This year, the family farm partnership will represent Vigo County and all Indiana farmers as one of 17 family farms featured daily at the Indiana State Fair, which runs Aug. 4 to Aug. 20. The Evans/Burbrink families will be featured on Aug. 16. As the theme of the state fair this year is "Wonderful World of Food," the state fair is highlighting farmers who grow food Hoosier families enjoy at the fair. The BE N AG family farm is listed as producers of corn dogs, as food grade corn can be made into corn dogs.

It is the third year for the featured farmer program at the state fair.

"Food is the number one reason people attend the state fair, so what better way to celebrate than honoring the Hoosier farmers who produce the food we eat," Cindy Hoye, executive director of the Indiana State Fairgrounds & Event Center, said in a statement about the program. Among duties, the family will participate in a parade and in a live chat at the Glass Barn, an area set up for agricultural education.

"The barn was built about four years, by the Indiana soybean farmers," Burbrink said, who previously served, along with Marty Evans, on the Indiana Soybean Alliance. "The idea of a glass barn is that we as farmers are not hiding anything. We want to be as transparent to the public as anybody, as there are misconceptions about farming. People have been removed from the farm for a few generations. It shows true life agriculture," Burbrink said.

Some misconceptions, Burbrink said, include the "GMO (genetically modified organisms) issue. GMO has allowed us to raise crops with much less pesticides and make more yield in a safer way," Burbrink said. "They now have sweet corn that is ear worm resistant, and it is all natural. So as opposed to spraying corn with an insecticide, it is now genetically modified where they have inserted a gene to resist the worm. So now, when  you pick sweet corn, you just peel it back and it is worm free," he said.

"We feel it has made everything safer and more efficient," Burbrink said.

The vast majority of corn, soy, canola, and sugar beets grown in the U.S. are now genetically engineered, and are often used as ingredients in processed foods, according to Consumer Reports.

"That is one thing that has been a really big change with technology, because years ago when I started working in agriculture, we used a lot more pesticides than today. So with GMOs and hybrids, we have done a better job of using less pounds of pesticides on the field," Evans said. "Also, farmers today do a tremendous job of taking care of the soils, reducing erosion, using a lot more no till or minimum till.

"We grow cover crops and try to keep the soils alive and working. Without soil, we would have nothing," Evans said.