There was a plan to prevent flooding at an I-43 construction site. Mother Nature had other ideas.

There was a plan to prevent flooding around a freeway construction project along I-43. It just came 24 hours too late.

There was a plan to prevent flooding at an I-43 construction site. Mother Nature had other ideas. 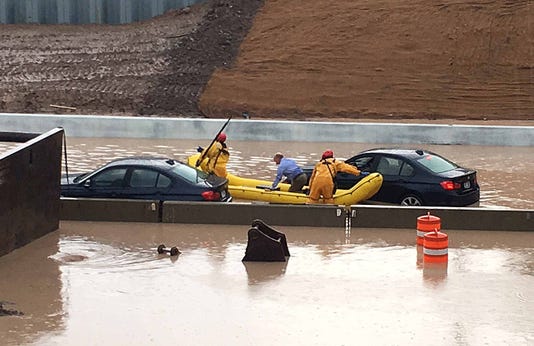 Emergency crews work to rescue people Friday after I-43 was closed near Good Hope Road because of flooding. The high water twice temporarily closed both northbound and southbound lanes just south of Good Hope Road. Construction there and at Green Tree Road has narrowed the lanes in recent months.(Photo: Mike De Sisti / Milwaukee Journal Sentinel)

There was a plan to prevent flooding around a freeway construction project along I-43. It just came 24 hours too late.

Work was scheduled to close I-43 at Good Hope Road overnight Friday into Saturday to install a larger storm sewer. Mother Nature had other plans, dumping buckets of rain on the area Friday morning that caused two complete freeway shutdowns, including at the heart of the morning commute.

What caused all this rain — ranging from 3 to 8 inches around southern Wisconsin — in such a short period of time? A very slow-moving system, National Weather Service meteorologist J.J. Wood said.

Flooding originally closed both north and southbound lanes on I-43 about 7 a.m., just south of Good Hope Road, where construction at Green Tree and Good Hope roads has narrowed the lanes in recent months. 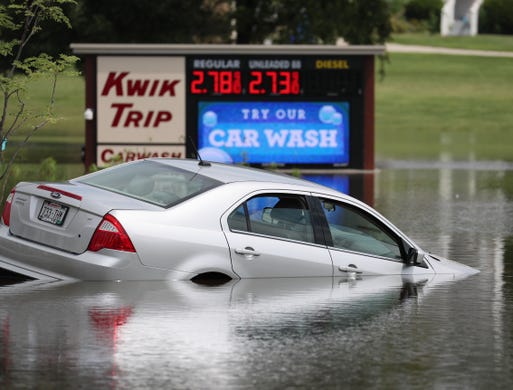 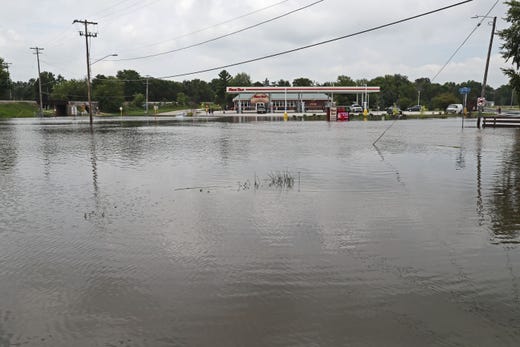 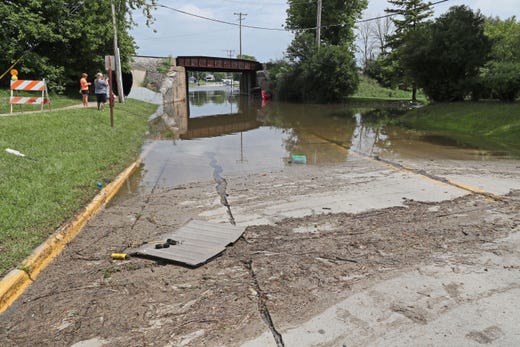 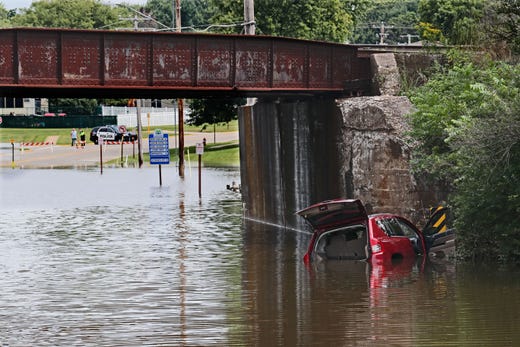 This car got stuck in water after the driver went around a barricade. Tthe driver was rescued by the Watertown Fire Department. Michael Sears/Milwaukee Journal Sentinel
Fullscreen 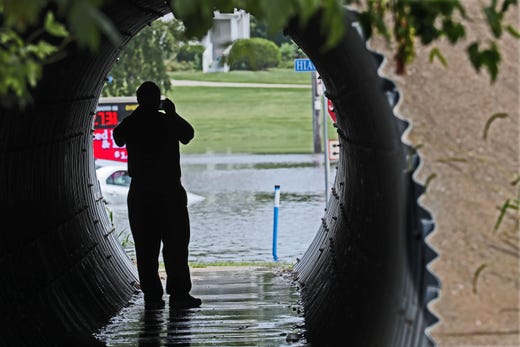 A man takes photos of the flooded area along W. Main St. in Watertown from a pedestrian tunnel under a railroad bridge. Michael Sears/Milwaukee Journal Sentinel
Fullscreen

Emergency crews work to rescue people after I-43 was closed near Good Hope road due to flooding. The flooding has both north and southbound lanes just south of Good Hope Road where construction at Bender Road has narrowed the lanes in recent months. Mike De Sisti / Milwaukee Journal Sentinel
Fullscreen 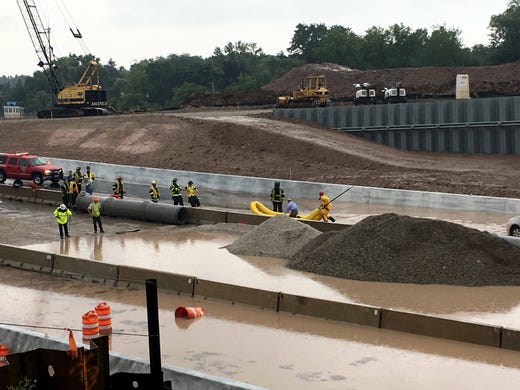 Traffic from the north was backed up all the way to Mequon Road and from the south to Capitol Drive. Mike De Sisti / Milwaukee Journal Sentinel
Fullscreen 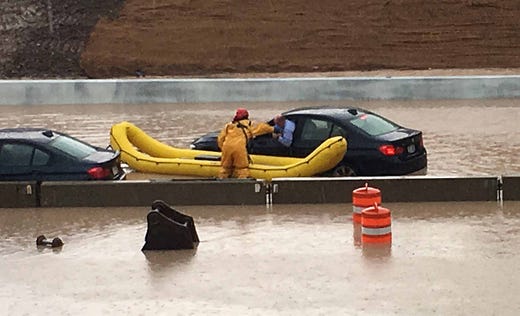 A car sits in the floodwaters on I-43. Mike De Sisti / Milwaukee Journal Sentinel
Fullscreen 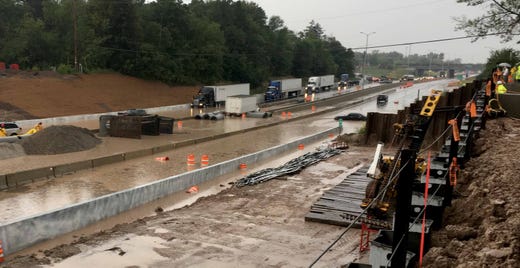 By 8:15 a.m. Friday, most of the water had been pumped or drained from the roadway, but the interstate remained closed until one northbound lane opened 30 minutes later. Mike De Sisti / Milwaukee Journal Sentinel
Fullscreen

A drain is cleared so that the water recedes on I-43. Sherman Williams/Milwaukee Journal Sentinel
Fullscreen 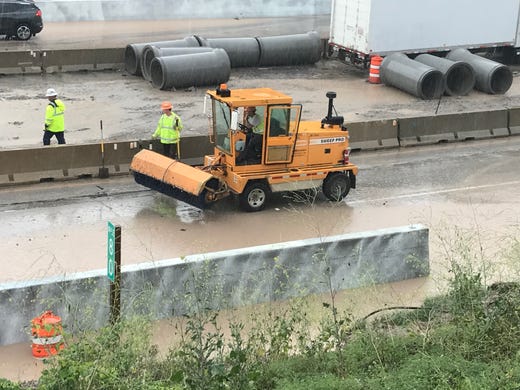 I-43 is cleared after the water recedes. Sherman Williams/Milwaukee Journal Sentinel
Fullscreen

Traffic begins to move on I-43 after one lane was reopened. Sherman Williams/Milwaukee Journal Sentinel
Fullscreen 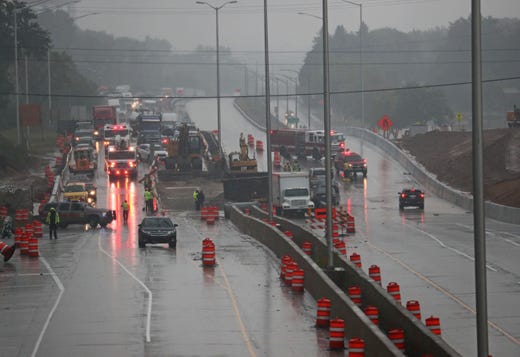 The water has been remediated but more rain is expected. Michael Sears/Milwaukee Journal Sentinel
Fullscreen

By 7:20 a.m., around 3 inches of rain had rapidly drenched the area, according to the weather service.

Northbound lanes on I-43 had reopened on the interstate by 9:15 a.m. and southbound lanes were reopened a short time later — only for both to be shut down again from 11 a.m. until about noon.

Earlier in the morning, several motorists could be seen sitting on top of their cars to escape the high waters on I-43 when the flooding began.

The North Shore Fire Department assisted stranded motorists in the area. No injuries were reported.

The flooding could have been caused by a variety of reasons, said Michael Pyritz, spokesman for the northeastern region of the state Department of Transportation.

In July 2010, the same area on I-43 flooded while major construction work was being done on the Green Tree Road bridge, as storm drains on the freeway were blocked to keep construction debris out.

In addition, Pyritz said, the area is much lower than surrounding areas, easily causing water buildup. That's why the DOT had sought a new, larger storm sewer.

"I don't know what exactly occurred," Pyritz said. "There's just no definitive answer. It seemed to be a combination of elements."

Flooding on I-43 was only part of the havoc drivers across southern Wisconsin faced.

Jefferson County took the brunt of the storm, with 8.6 inches reported in parts of the county by 2:30 p.m. Friday, the weather service reports.

A man is rescued by the Watertown Fire Department after he drove his car around a barricade and float into a flooded street in Watertown. Milwaukee Journal Sentinel

The Jefferson County Sherrif's Office reported heavy flooding and had advised staying away from the northern regions of the county — Watertown and Ixonia especially — for the day.

Due to the extreme flooding in Watertown, the stadium field will not be playable tonight for the Football home opener. Therefore, the game against Beaver Dam tonight is being postponed to Saturday night at 7:00PM. Go Goslings!

The weather service issued flood warnings in Jefferson and Dodge counties that will remain in effect until 12:15 p.m. Saturday.

After Friday night, Wood said, the weather should quiet down across southern Wisconsin.

We followed four Wisconsin dairy farms for a year as they struggled with an industry-wide crisis, one didn't make it

Wisconsin once had a 'model' voting rights program for people with disabilities. Officials have let it decline.

DOWNLOAD THE APP: Get the latest news, sports and more