Did Burger King tell a whopper in methane ad?

Burger King seeks counsel from leading scientist after he calls company out on misleading methane claims in Whopper ad.

Did Burger King tell a whopper in methane ad? 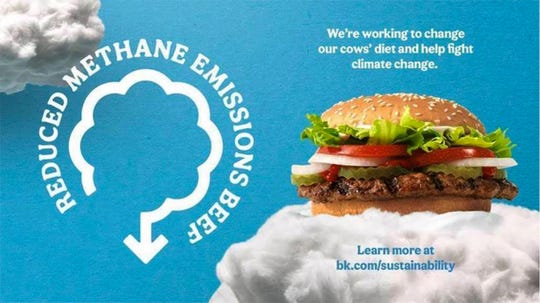 Farmers and ag industry experts are pushing back against a controversial ad aired by Burger King intimating that bovine flatulence is having a dire effect on global warming. (Photo: AP)

Farmers and ag industry experts are pushing back against a controversial video aired by Burger King intimating that bovine flatulence is having a dire effect on global warming. In the awkward ad, the fast food giant asserted it was doing its part to freshen the atmosphere while reducing methane emissions with a simple solution: adding lemongrass to cows' diets.

The commercial, released on July 14, claimed that adding lemongrass to the animal's diet would cut down on "cow farts" reducing methane emissions by "up to 33%".

Burger King's contribution to the global warming crisis was met with scorn by many in the ag industry calling the ad both "condescending and hypocritical". Not only that, it was inaccurate says UC Davis Professor Frank Mitloehner who tweeted: “IT'S. NOT. THE. COW. FARTS., adding that all enteric methane from cattle comes from belching,

The leading scientist tweeted that it was disappointing to see the company "drop the ball" by promoting a study that was still ongoing and focusing on farts, when belching is the bigger problem.

"Suggesting otherwise turns this serious climate topic into a joke. Reducing methane is a HUGE opportunity," he tweeted. "That should be a goal. But we shouldn't trivialize it for trendy marketing."

Burger King rolled out its Reduced Methane Emissions Beef Whopper, touting that the burger is made with beef sourced from cows that emit reduced methane.

In an interview with Farm Journal's AgriTalk Host Chip Flory, Mitloehner pointed out that beef production in the U.S. contributes just 3% of all greenhouse gases compared to fossil fuel use and production which makes up 80%.

University of California Davis professor Frank Mitloehner who has lead research concerning gas emissions from cattle, criticized Burger King for jumping the gun by promoting a study that was still ongoing and focusing on farts, when belching is the bigger problem. (Photo: Rich Pedroncelli, AP)

Burger King's claim that adding just 100 grams of lemongrass leaves to a cow's daily diet helping them to release less methane is doubtful. In his blog on Clear Center, Mitloehner wrote that Burger King literally "jumped the gun", adding that the research hasn’t gone through the rigorous and important step of peer review.

Burger King had been working with a UC Davis colleague of Mitloehner's, colleague Dr. Ermias Kebreab who commented on Twitter that his research was "inconclusive and so far showed no methane reduction from lemongrass".

Results from studies done at Autonomous University at the State of Mexico had yet to be published.

Mitloehner told Flory that representatives from Burger King reached out to him after learning of his reaction to the advertising campaign.

According to Farm Journal's Drover's report, Mitloehner said after sharing facts with them, the company made several changes to their media campaign including removing content that was deemed to be demeaning to farmers.

Mitloehner also said during the interview that Burger King asked him to partner with them in order to gain science-based insight and to fact check the content prior to release.