Adalyn was named Wisconsin's Tiny Miss Agriculture in 2019, which allowed her to compete in the national competition this year. 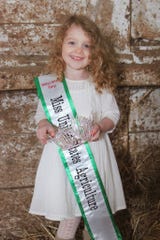 Adalyn was named Wisconsin's Tiny Miss Agriculture in 2019, which allowed her to compete in the national competition this year. Competitors for the national title were tested in interviews, on-stage introductions, evening wear, on-stage questions, home state-themed fashion and photogenic abilities.

Adalyn and her brother Colton are the sixth-generation members of their family's dairy farm. Their parents, mom Monica and dad Jeremy, are fifth-generation dairy farmers for Schwittay Farms. Adalyn, who also goes by Addy, is set to attend 3K at St. John's Lutheran School in Peshtigo this coming fall.

A press release said Adalyn "enjoys feeding calves, collecting eggs & feeding the chickens, playing in the dirt & sand piles, and helping wash animals for shows," and she likes to ride tractors. She had 36 sponsors and anonymous donors in the competition.

"Addy would like to give special recognition to her Mom, Dad, Grandma, and Kat Flynn (her aunt) for all their help in preparation," the release stated.

"The idea behind the Miss United States Agriculture Pageant Program is to celebrate the agriculture industry and our local farmers all while promoting self-esteem, building strong leaders and awarding scholarships to encourage a continuous pursuit of education," said the program's national director Ciera Ingram.

"It was a blessing to watch her interact with girls of all ages and start to come out of her shell," Monica Schwittay said. "We are looking forward to watching her grow more throughout her reign."