Clearing up misconceptions in the dairy aisle

As word spread across social media that dairy farmers were forced to dump milk, posts from troubled (and many uninformed) consumers began appearing.

Clearing up misconceptions in the dairy aisle 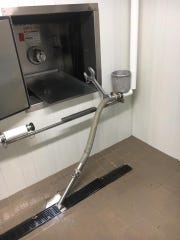 As word spread across social media platforms that dairy farmers were being forced to dump milk, posts from troubled (and many uninformed) consumers began appearing.

Some scolded farmers, reminding them that there were starving families out there, more so due to wage earners laid off thanks to the economic slowdown and shelter in place orders decreed by state officials.

"Rather than running it down the drain, think of the babies, the children, the homeless who through no fault of their own, are worried sick about how to put food and milk on their table." Or "How about instead of wasting milk, farmers donate it? Not really sure I would feel right dumping perfectly fine milk down the drain when millions of kids go thirsty and hungry every day."

Many commented on the irony of farmers dumping milk while consumers were limited to the number of gallons of milk they could purchase in stores.

Quite a few readers asked why farmers simply couldn't deliver milk from the farm directly to shelters and food pantries, obviously unaware of the law regarding the sale of unpasteurized, raw milk.

Several readers wondered if milk was still being passed out to students along with free lunches at distribution sites around the state.

One reader said dumping of milk was just one way to rein in excessive milk production and 'what better time than now' to accomplish that.

As a farmer, I was heartened by the number of people who stepped up and tried to educate their fellow social media counterparts as well as those who expressed their support for farmers and sympathized with their plight.

Kara O’Connor, government relations director for Wisconsin Farmers Union, says their organization has fielded a number of inquiries from concerned consumers about the current dumping of milk and limited supplies in the dairy section.

"This situation is indeed troubling. It is heartbreaking for farmers to have to dispose of their milk like this," O'Connor said.

As a voice for farmers, Wisconsin Farmers Union is reaching out to help educate the public on why this is happening across the United States.

"The reason this is happening right now is that many of the largest institutional buyers of dairy products, including schools and restaurants, abruptly closed nationwide -- and they, in turn, abruptly cancelled orders that they had placed with cheese plants and milk bottlers," O'Connor explained. "Since most dairy products are perishable, dairy processors can only store a limited amount of product that they don't have a buyer for. Once their storage is full, they start turning away farmers' milk from the plant because they have nowhere to put the finished product."

Farmers Union along with other advocacy groups have stepped forward, urging the USDA to step in and buy surplus dairy products for distribution to food pantries, etc.

"We are hopeful that this will happen soon, and begin to relieve the current kink in the dairy supply chain," she said..

O'Connor points out that dairy products intended for food service sales (restaurants, etc.) are being re-packaged for retail sale.

"Unfortunately, it will take some time for food processors to make that conversion.  A cheese plant that normally produces unbranded 50-pound bags of mozzarella cheese for restaurants cannot instantaneously convert its production line to make branded 16-ounce packages of cheese for grocery stores," O'Connor said. "Hopefully business owners will get creative and start coming up with new ways to meet consumer demand for dairy products outside of the restaurant supply chain." 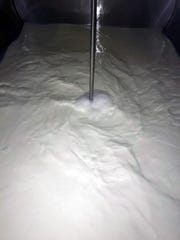 Milk cools inside this bulk tank on a Wisconsin farm. As word spread across social media that dairy farmers were forced to dump milk, posts from troubled (and many uninformed) consumers began appearing. (Photo: Colleen Kottke/Wisconsin State Farmer)

There is one other important action that Congress could take, O'Connor says.

"For many years, WFU has urged Congress to create a mechanism that would give farmers the economic incentive to balance their milk production with market demand, so that farmers never find themselves in the terrible situation of having to dispose of milk that doesn't have a home," she said. "This current circumstance really drives home the need for balancing dairy supply and demand. While nothing could have entirely insulated the dairy industry from the impact of the global pandemic, farmers would be far better off in this moment if we had a program in place to help them quickly adjust their production in response to market conditions."

Many online ag advocates urged those on social media to support farmers by asking store chains limiting the purchase of milk to lift the restrictions now that the initial panic buying has subsided.

Many responded saying they were hoping to help farmers out by buying extra dairy products.

"Farmers have had a tough time for the past couple of years, and it's times like these when you really appreciate our safe, reliable food supply.  More than ever, we need to not only support them by buying a few more dairy products, but to let them know we're standing behind them, even if we don't understand everything that is going on behind the scenes," one women wrote. "I wish I could do more."