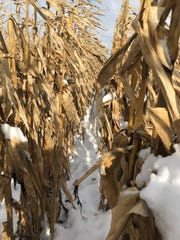 Some farmers in western Wisconsin have already been back in the fields this spring.

Joe Lauer, agronomy professor at the University of Wisconsin-Madison, said some farmers were forced to leave corn in the field after snow started to fill up fields.

"There's a stretch from between Wausau and Eau Claire and then down into Sparta, kind of a long arc there where there was a lot of corn that had to be left in the field," Lauer said. "People tried to harvest it off and on through the wintertime, but the ground was oftentimes too soft that it didn't support the equipment."

Lauer said many producers will need to wait until their field is dry to avoid compacting the soil with heavy equipment.

But Jerry Clark, agriculture agent for UW-Madison's Division of Extension in Chippewa County, said he's already seen some farmers in their fields thanks to warmer weather over the last few weeks.

"The snow depth has dropped quite a bit but the soil was still somewhat frozen," Clark said. "What we really don't want is any snow sitting on the corn itself as it goes through the combine. But farmers were able to move through the fields that they could, anyway. There's still a couple of taller drifts out there, but even those have settled enough where farmers are able to get through."

Clark said it’s not unusual for some farmers to leave crops in the fields over winter, either due to equipment breakdowns or running out of time to harvest. But he said the prevalence of acres still needing to be harvested this year is significant.

And Lauer said that means farmers are going to be under a lot of pressure once spring planting time rolls around.

"The challenge will be that people will have to do kind of two seasons of work in one," Lauer said. "The concern always then is safety and people just getting tired from trying to do too much field work in such a short amount of time."

Clark said most of the corn in his area is in good condition, with a few reports of mold. He said some corn hybrids weren't sturdy enough to keep stalks standing through the winter, which has created more difficult harvest conditions.

This article was republished by permission from Wisconsin Public Radio.