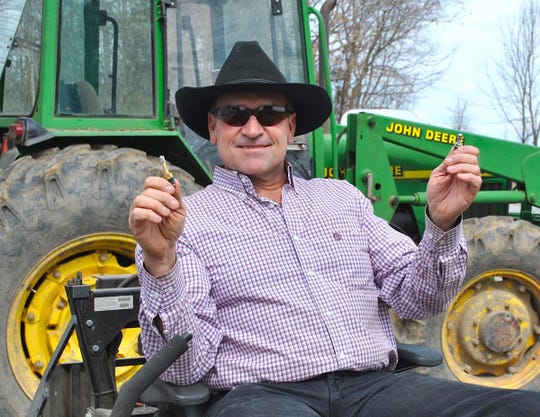 Todd Johnson, creator of QuikStem, poses with two of his products on his farm in Berryville, Va. (Photo: Matt Welch/Winchester Star/AP)

BERRYVILLE, Va (AP) – Out in a field with one functioning arm and a broken valve stem on his tractor on a near-100-degree day, Todd Johnson had had enough.

The same feeling when it happened again two days later, though, was the nail in the tire that led him to creating his own solution.

That was nearly six years ago, and now Johnson doesn’t worry about busting any more valve stems.

Johnson, who owns The JBiT Ranch with his wife Barbara in Berryville, created his own valve stem. The product, QuikStem, recently received two patents and two trademarks and is available for purchase through multiple companies.

Johnson said his valve stems can be replaced on the spot within minutes rather than having to take the tire to a shop to have it fixed.

The idea was born out of frustration, Johnson recalled, when he blew a valve stem in the midst of a large horsemanship event at his ranch.

“It was about a four-hour war fixing it,” Johnson said at his kitchen table Friday afternoon. “I spent that night on the internet thinking there has to be something that I can just push in the tire from the outside. This is insane that I have to break this tire down. Nothing existed.”

He remembered thinking to himself: “If I could push something in there and cause it to expand in a way that was rugged and sturdy, it would be every bit as rugged as a valve stem inserted from the inside.”

So he went to the drawing board and began producing prototypes, the first of which was made on a lathe in his own shop. He used an old bungie strap, spun on the lathe and finished with a dremel tool. The rest, from the top of the rubber grommet upward, is “standard public domain,” Johnson said — a standard valve stem with a standard core “like in billions and billions of tires.” 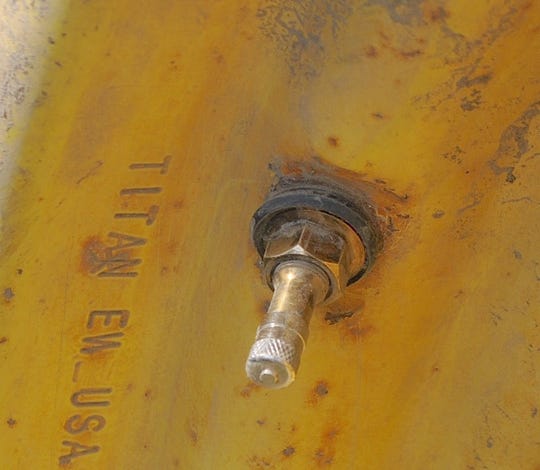 It worked, and he used it. He still does, too, and has about 10 of them in use on his farm currently.

The design part was easy enough, Johnson said, but the rest of the process — the selling and patenting — was anything but.

He called multiple companies to pique their interest, but had no luck at first.

“They would say they don’t sell a lot of valve stems. Well, they don’t sell a lot because the average person can’t install them most of the time,” he said. “But if you told them they could be back to work in 5 minutes and for $12, I think they’d jump at that. We want this to be something people at first didn’t know existed but then say they can’t live without it.”

Then Haltec picked up the phone. They were immediately interested, Johnson said, and they now take care of manufacturing.

Johnson and his lawyers had to submit “extremely specific technical drawings,” which consisted of over 100 points of measurements, specifications and dimensions — “every detail imagined had to be outlined then explained for its intended use and how it works,” Johnson said.

The process, he said with a smile, was worth it.

Now, the product is on the market, selling from about $7.50 to $15 on multiple platforms, including FinditParts, Amazon, Grainger, Zoro, RockyMountainATV, Hardline Products and Moose Products. Eventually, Johnson hopes QuikStem will be available in brick and mortar auto parts shops.

With hopes of QuikStem catching on, Johnson said he just wants to help others be less frustrated with having to “waste a day of work” at a shop as well as keep others’ businesses and livelihoods on track.

“For a farmer, if he’s trying to get a hay crop in and rain’s coming and he blows a valve stem, it could cost him thousands of dollars. Twelve bucks for a tire stem? Give me 10,” Johnson said. “For those using those ATVs and UTVs, your weekend can be done. You were having fun, then you’re stuck either walking and somehow towing your vehicle out or going back to fix it. But this valve stem can get you right out of that ditch and back at it.”

The Johnsons are self-described “Northern Virginia transplants” who have been in the Berryville area for over 20 years.

Together, with two twin, 7-year-old daughters and a 9-year-old son, they maintain 100 acres of land as well as run The JBiT Ranch, located at 1674 Summit Point Road in Berryville. Neither considered themselves farmers or ranchers by trade, but decided on their honeymoon that they were going to enter into that field.

While still maintaining the ranch, the Johnsons will turn the focus to marketing as far as QuikStem is concerned.

“You’ve never seen an ad for a tire valve stem. There’s been one way to do it, and that’s how it’s always been done. It’d be like an ad for shoe laces. So, I’m working on that,” Todd said. “This is being produced on the same line and to the same standards as John Deere. That’s something I couldn’t do on my own, so that gives me a ton of confidence in my product.”

He maintained the QuikStem is a must-have for anyone.

“It truly doesn't make sense to operate a tractor without one of these. There are two kind of tractor owners — those who have blown valve stems and those who are going to. It’s a matter of daily course,” he said. “Everybody that owns any vehicle or equipment, you have something to fix it when you get a nail or something in it. Now we have that for valve stems.”