Slow down, see what you want when attending World Cheese Champion event. 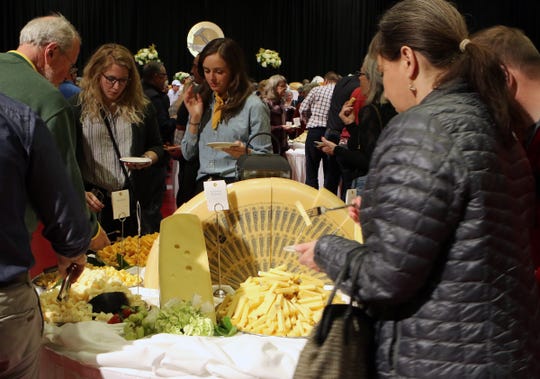 People started lining up outside the doors of the hall at Monona Terrace Convention Center more than an hour before the winners reception was set to start at the World Championship Cheese Contest on March 5. They came armed with an appetite for cheese and a game plan.

Chris Herman, of Madison, was attending for the third time "and it keeps getting bigger every time," she said. "The first time was just this low key thing we just sort of landed upon and thought, oh, this is fun. And the last time, which was two years ago, it was much larger, but still this is even larger." 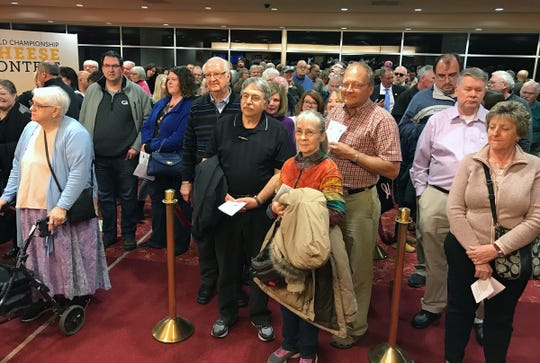 People started lining up for the evening reception at the World Championship Cheese Contest more than an hour before the doors opened on March 5, 2020, at Monona Terrace in Madison.  (Photo: Carol Spaeth-Bauer/Wisconsin State Farmer)

About seven to eight big spreads of cheese and appetizers throughout the hall awaited guests with bars providing drinks, companies with samples and expert judges where attendees could pull a plug from a block of cheese, lined the perimeter of the hall.

Herman said they "learned better how to manage" and not eat all the cheese at once. "Slow down, see what you want, because they don't run out," were her words of advice for attendees. "It's fun." 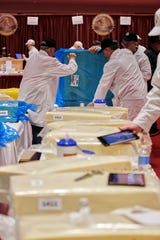 Anne Pautler, from New Orleans. found out about the event through a gossamer's thread that lead to Herman. A friend of Pautler's who is friends with Herman's husband was in New Orleans for Mardi Gras and told them about the event in Madison. Over a year ago they planned to come to the event. 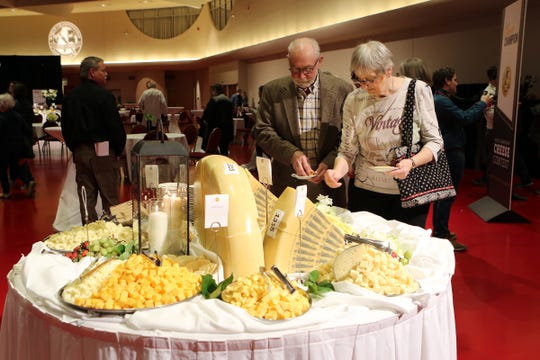 The doors opened and attendees flooded in, heading straight to tables of cheese samples during the World Championship Cheese Contest on March 5, 2020, in Madision. (Photo: Carol Spaeth-Bauer/Wisconsin State Farmer)

They came earlier in the week to watch some of the judging. "So cool," Pautler said.

Cheryl Olson, from Madison, was there for the first time. Olson said they knew about the World Dairy Expo, "but we just never zeroed in on this one, so this is exciting."

A record-breaking 3,667 cheeses were entered in the 2020 World Championship Cheese Contest, with just 20 cheeses remaining in the hunt for the title of World Champion Cheese, set to be announced at the contest's crowning event, the Cheese Champion, on March 5.

While the three Wisconsin cheeses in the top 20 didn't make it to the final three, each cheesemaker knew the value of the exposure being one of the top 20 would bring to their business.

The winning cheese was MA Gruyere from Bern, Switzerland has been named the 2020 World Champion Cheese earning a score of 98.81 out of 100.