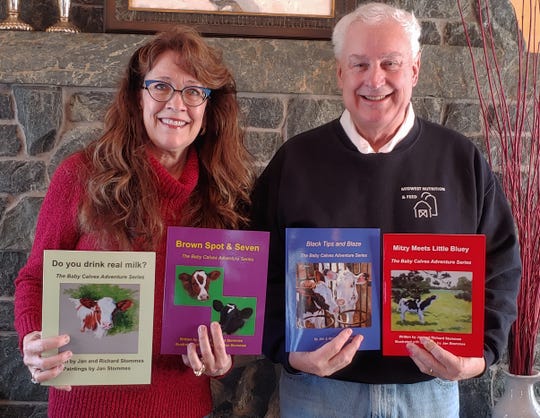 Alarmed by the increasing amount of misinformation about the dairy industry, Rich and Jan Stommes teamed up to create a series of children's books to bring awareness to the care that farmers give to their animals who create a wholesome product for consumers. (Photo: Courtesy of Rich and Jan Stommes)

OWEN, Wis. – Rich and Jan Stommes are doing their part to fight back against the bad press the dairy industry has been fielding on a daily basis.

"We're alarmed by the increasing amount of misinformation that has been published which we believe is partly responsible for the plunging fluid milk consumption in the United States and a general lack of understanding of how farmers work," said the Owen couple.

The opportunity to take a stand against the negative publicity was presented to the Stommes when one of Rich's clients suggested that the couple create a book educating the public about the "good life" to be had on the farm.

Thus the seed for The Baby Calves Adventure Series was planted. At first glance, these books created for an audience of young children featuring the delightful antics and adventures of young calves gamboling about the fields and meadows of the farm learning about their world, seem innocuous.

Told through the perspective of the young, curious calves, the Stommes artfully weave in factual information about conscientious animal care and the healthy benefits of milk that is both engaging and educational for the child and the adult reader.

"We wanted to include scientifically accurate terms and concepts so they would have more of an exposure to what nature is really like, how farmers take care of their animals  as well as having fun adventures on the farm," Jan Stommes said. "Children respond to little things so that's why we chose the calves, which are somewhat like children, having curious and impish ways that they can identify with."

Since she was a young child, Jan Stommes wanted to become a veterinarian. However, allergies and asthma triggered by animals sidetracked that dream. Instead, she attended the University of Minnesota (where she met her husband-to-be Rich who grew up on a farm) to pursue a degree in animal science.

The couple tried their hand at hog farming, and later moved on to different ventures in the ag industry. Rich would find work at a co-op in central Wisconsin, and later with a partner start a business Midwest Nutrition & Feed in Spencer.

Jan made the decision to stay home and raise their three sons. During that time she taught herself to paint as a hobby, having no aspirations that this endeavor would one day bring her acclaim on the national and international level for her work.

She is most known for her realistic portrayals of wildlife, but she also creates in a variety of styles from trompe l'oeil to Impressionism.

"I'm an eclectic person so that's how I paint. When I do wildlife I try to paint them as correct in their environment as possible, because that's the scientist in me," she said. "I did take some liberties in some of my books like Mitzy meets Bluey. And some of the pictures of the animals have a little more personality in them."

This isn't the first time Rich and Jan have collaborated, pooling their literary and artistic talents together. Rich, a dairy nutritionist with over 30 years experience, penned the book The Science and Art of Grazing Dairy Cattle with Jan illustrating the book and including several recipes using dairy products with locally sourced ingredients.

"Rich is a very descriptive writer and has written a couple of books for his business. But his vocabulary is a bit much for children. It has to be concise in order to keep their attention...that's where I come in," she said with a laugh. 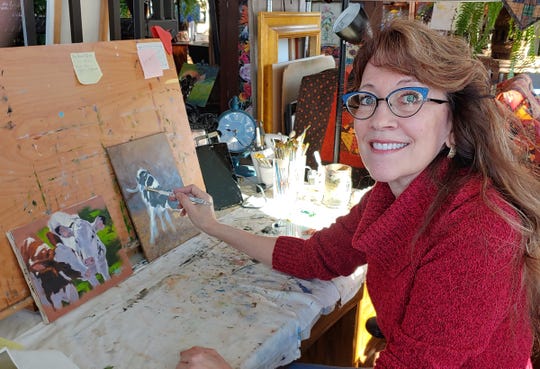 Trained as a research scientist in animal science, Jan Stommes uses her academic background and self-taught artistic skills to help illustrate and edit the series of books she penned with husband, Rich. (Photo: Courtesy of Rich and Jan Stommes)

Stommes says Rich initiates the story and she modifies some of the adventures by adding more dialogue.

"Thankfully neither one of us is sensitive (about constructive criticism). We will read it back and forth to each other or have one of our sons read it out loud for us," she said. "We try to make the books humorous because it should be entertaining. Some of the humor is tongue in cheek for the adults reading the books."

While the writing and editing of the books hums along in no time, Stommes says the artwork is a another story. In the past, Stommes would create illustrations for other books using her full-sized paintings.

"Just the process of applying paint to a larger surface is very time-consuming," she said, adding that one book uses between 35-40 paintings. "Then I had an epiphany: I had done small postcard-sized paintings for some of my other work, so why not do that for these books?"

Stommes said the need for accurate information is critical for consumers having no contact with the ag industry.

"That was one of the prime reasons to go ahead with these books. How many people have never even seen what a farm looks like online, let alone have stepped onto a farm?" she said.

Stommes recalls an incident while teaching a science class about muscles at Spencer High School.

"I was explaining how a particular muscle in cattle would be considered the tenderloin because it's not used a lot when a student asked, "You mean meat is muscle?"" Stommes said. "I thought she was pulling my leg. We're talking about small town USA and they don't even know where meat comes from. All they hear on the news is about factory farms and showing animal abuse. But they don't show the other side."

Stommes says it makes no sense that farmers would intentionally abuse their animals.

"These animals are like queens where they have to be correctly housed, their feed grown properly and cared for so they produce," she added. "Radical animal rights groups have infiltrated dairies, seeking to document and exploit rare instances where animal abuse has occurred. They want this viewed as common practice."

Stommes who enjoys cooking and is well-versed on nutrition says the word “milk” is misleadingly utilized to market white beverages that are manufactured from plant products without the nutrients of real milk.

"The companies that produce these products unfairly parasitize the positive image of milk that has been present for many years," she said. "Unfortunately milk is losing the perception as one of the most healthful foods available to humans."

The Stommes' say The Baby Calf Adventure Series drives home to readers the health-giving properties and deliciousness of dairy products.

"When I go shopping to get butter, there are so many brands that aren't even butter, even milk for that matter," she said. "Whatever happened to advertising about how good milk is for you?"

"The consumption of real dairy products and meat is supported by voluminous data to be an essential part of a healthy diet," he said. "I am also concerned when opinions are given that counter facts that are supported by large amounts of research, and that products that have no milk in them are referred to as ‘milk’. The great image of real milk is being taken over to sell products that are artificially made instead of being produced by cows." 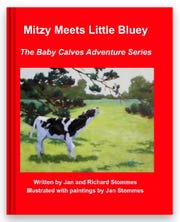 Stommes said the books were initially created to be used as door prizes at the annual customer appreciation event held each year at Rich's business.

"Customers have been appreciative of the fact that we are trying to do something to help promote the product they produce," Rich said. "Several have purchased our books. One customer even donated a set to his school library."

Rich says he has heard a fair amount of positive feedback about the books, adding that one customer says his children read the books every night.

"They are also appreciative that the calves painted for the books are actual calves on our clients’ farms that I have taken photos of," he said. "Now, producers give me a heads-up when they have a calf that has interesting markings that might make them eligible to be included in a book."

Two such calves with distinctive markings on their foreheads appear in the book Brown Spot and Seven.

Stommes said the books which she created on the website Blurb are offered for sale on her website and she doesn't plan to offer them on Amazon, saying most sellers are lucky to receive $1 for each book sold on the online giant's website

"If a publisher someday said 'Hey, we like your book' then we'd have that discussion," she said.

Rich says he feels the series of books helps to put a personal face on the process of producing milk, the most ideal human food.

"It also highlights the hard-working and good people that are behind the process of producing this food," he said. "We hope that the attitudes of the public, both adults and children, about the dairy industry will be positively influenced by these books."