The two women each aspires to run a dairy farm in their home country. 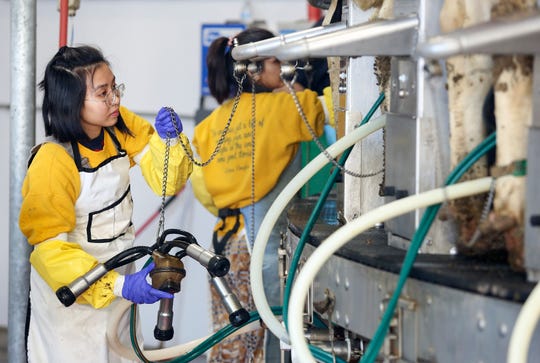 Arubam Mona, left, and Ankita Rani milk cows at Brimeyer Farms in Sherrill, Iowa, on Monday, Feb. 10, 2020. Rani and Mona were born and raised in India, and each aspires to run a dairy farm in their home country. (Photo: Nicki Kohl, AP)

SHERRILL, Iowa (AP) - When they first set foot in Iowa, Ankita Rani and Arubam Mona quickly realized they were about to experience something entirely new.

Rani and Mona were born and raised in India and each aspires to run a dairy farm in their home country.

The young women will spend the better part of a year living and working at Brimeyer Farms, an expansive dairy operation located in Sherrill. In both its scope and sophistication, Rani quickly realized the farm was unlike any she had seen before.

"Where we did our training, it was small. We have never been to a farm this big," Rani told the Telegraph Herald. "And in India, more of their work is manual. They don't have these automatic systems."

The two women were introduced to agriculture at a young age. Rani's father owned a small dairy farm, and Mona's family operated a modest poultry operation.

They studied agriculture at the same college and became roommates. Each graduated in 2019, and they now plan to helm separate dairy operations with their families in India.

Both women realize that a visit to agriculture-rich America could give them a leg up.

They came to the U.S. thanks to Communicating for Agriculture Education Programs, commonly referred to as CAEP. The organization offers paid international agriculture exchange programs that facilitate the spread of ideas and agriculture practices.

Based in Minnesota, CAEP was founded in the 1980s and has placed tens of thousands of international exchange visitors at farms in the U.S. and other host countries. 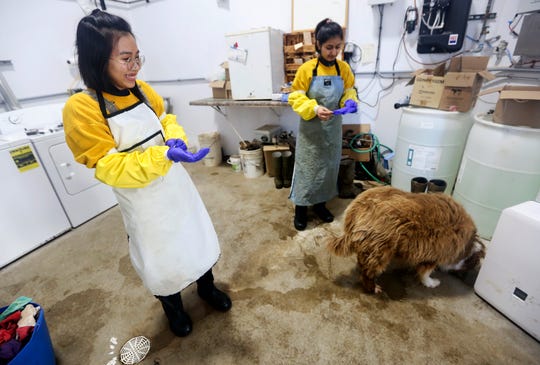 Arubam Mona, left, and Ankita Rani put on their gear before milking cows at Brimeyer Farms in Sherrill, Iowa, on Monday, Feb. 10, 2020. Rani and Mona were born and raised in India, and each aspires to run a dairy farm in their home country. (Photo: Nicki Kohl, AP)

Farm owners and operators Rick and Judy Brimeyer typically hire local high-school students to lend a hand on their farm, an approach that has yielded inconsistent results over the years. Eager to try something new, they began working with CAEP in hopes of finding international workers.

The Brimeyers reviewed student resumes and selected Rani and Mona as their preferred candidates.

However, they had never met or even spoken to the young women before they landed in Iowa four months ago. They recall waiting for Rani and Mona at the Dubuque Regional Airport with a sign bearing their visitors' names — the only way to ensure the two parties connected.

In addition to working together, the Brimeyers also share a house with Rani and Mona. It's been a surprisingly seamless transition.

"You have to learn who they are and develop a certain amount of trust," said Rick. "But it didn't take long to realize the kind of people they are. They are very honest and respectful."

In addition to teaching them about agriculture, Judy is hoping to expose the visitors to life and culture in the United States.

The Brimeyers have taken their guests to multiple events and attractions, ranging from an apple orchard to a local concert. Judy is already looking forward to bringing Rani and Mona to county fairs this summer.

The personal touch doesn't go unnoticed by the Brimeyers' guests.

"They consider us part of their family, and that is the best thing about staying here," said Mona.

Brimeyer Farms has 450 dairy cows that are milked twice per day.

Rani and Mona wake up at 3 a.m. each day and begin their early shift by 3:30 a.m. The women spend the next-three-and-a-half hours milking cows, as well as carrying out setup and cleaning duties in the milking facility.

Rani and Mona have more than eight hours of free time in between shifts and usually pass it by reading or chatting with friends or family members. They avoid the outdoors as much as they can.

"We have never been in a place where there has been this much snow," Rani explained. "Where I came from, the weather is mostly humid and hot."

CAEP programs require that participants receive a well-rounded experience that exposes them to a breadth of industry knowledge.

To this point, the visit has focused largely on milking procedures.

The latter part of their stay will focus more intently on topics such as breeding and nutrition, the latter of which is particularly intriguing to Rani.

Mona is hoping to soak up as much information as possible, and she's confident her host family will help her at each stop along the way.

"Everything we need, they are willing to help us," she said. "I know there are a lot of things I can learn here and apply them back at home."