Dairy producers and retailers for bankrupt milk-processing giant Deans Foods received a letter from the U.S. Department of Justice recently, announcing the federal investigation of Dairy Farmers of America's potential acquisition of Dean Foods and the potential competition for selling raw milk.

Back in November, Dean Foods signaled that it was "engaged in advanced discussions" with the country's largest dairy co-op, while other industry watchers are advised against a quick sale.

The search for a buyer commenced shortly after the country's largest milk processor filed for bankruptcy, claiming a steady decline in fluid milk consumption and the public's penchant for alternative products are to blame.

Mark Stephenson, director of dairy policy analysis at the University of Wisconsin-Madison, said Dean Foods represented at least a third of fluid milk sales (in the U.S.) and 10% of total milk sales.

Peter C. Carstensen, a professor emeritus at the University of Wisconsin Law School told The New Food Economy that a sale between Dean Foods and DFA could raise a conflict of interest that could result from "trying to lower prices paid to farmers in order to boost their revenues as a milk processor."

He warned that a "DFA buyout of Dean Foods could give it monopoly-like power over the milk market."

"What you're going to see is increased risk of tacit collusion on the consumer side, raising the price of milk for consumers," he told The New Food Economy.

According to the Wall Street Journal, a deal between Dean and DFA would unite two dairyland giants. Dean is the biggest U.S. milk processor by sales, selling $4.8 billion worth in 2018. Dairy Farmers of America estimates that it markets nearly one-third of milk in the U.S., counting Dean as the cooperative’s biggest customer. DFA also runs milk-bottling plants and consumer dairy brands of its own. 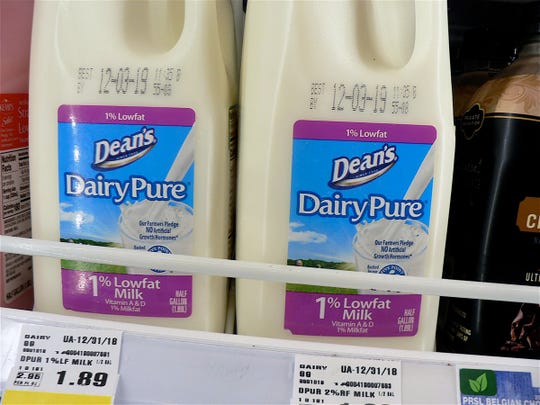 Dean Foods represented at least a third of fluid milk sales (in the U.S.) and 10% of total milk sales. (Photo: John Oncken)

The outcome of any antitrust review could determine the fate of dozens of plants and other assets owned by Dean. Competition authorities could ultimately decide to take no action, the Wall Street Journal reported.

According to a spokesman for DFA, any deal between Dean Foods and the Kansas City-based cooperative would be subject to approval from the bankruptcy court as well as antitrust regulators.

“When the largest processor of raw milk in the world files for bankruptcy, we have an obligation to do what we can to secure those markets and work to minimize disruption to our members and other farmers,” Monica Massey, DFA’s executive vice president told the Wall Street Journal. “If a deal is reached, we will fully cooperate with DOJ officials, as we have done with past transactions.”

A group of Dean Foods bondholders also vocalized its concerns over the potential sale of the giant milk processor to DFA, intimating that the sale may not survive antitrust challenges and the beleaguered company should be casting the net further for other potential options including other buyers, restructuring or alternative financing, according to Bloomberg.

DFA and a group of bondholders are expected to bid on Dean’s assets. Bankruptcy hearings will take place in February.