Melland's grandkids love to test out the corrals.

FORBES, ND – A rancher with a big heart and talented hands relaxes by crafting toy models of ranch equipment at his shop near Forbes, ND.

Dave Melland builds reduced- size replicas of the equipment he uses every day on the ranch where the family raises cattle and feeds calves. Concentrating on the toys gives Dave a chance to turn off the hustle and bustle of daily work. Especially this year. He shared, “Sometimes, at 5 a.m., an idea will pop into your head and you must try it.”

Dave built his first miniature feed wagon in 1993. He took the gold/red Knight replica to a toy show in Aberdeen. Judges awarded him first place in the 11th annual scratch-built toy competition. “I was pretty proud of myself.” It still is his favorite.

Most times, he gives away his work to people he knows.

“At Christmastime, I think of a family who might enjoy the toys and will give it to them. The most fun is in giving the toys away, that is almost more rewarding than getting a $100 check.” 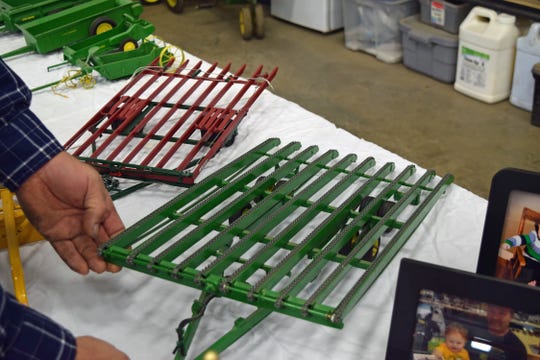 Dave starts by measuring the full-size machine exactly. The models are 1/16 of the actual size. He said that comes out to be a little less than ¾ of an inch to equal one foot. Some items are complex. The new black feeder wagons he makes include a helix reel in them, a scale and, by opening a door, you can see the workings of the rear end.

Dave’s second favorite project was building a 12x19.5-inch replica of a Kramer Ranch Hand chain stack mover. This project took 56 hours to complete. He made the 10 teeth with a minibreak, walking tandem axles, homemade hydraulic cylinders and several feet of toy chain.

Dave and his wife have four daughters: Rebecca Melland, who farms with her dad; Jennie, married to Jed Anliker; Megan, married to Mitchell Friedt and Denae Melland. Jennie and Jeb have two sons, Charlie, 2 and Riley, 5.

Jennie is a teacher and one little fellow told her, “Your son Riley will be really lucky one day.” When she said she was not sure what he meant, the young man replied, “His grandpa will make him anything he wants.” Dave said, “That’s true as long as my hands keep working.”

Dave enjoys making kid-sized corrals which fold up and can be pulled down the road, just like in real life. Charlie and Riley love moving the animals through the corrals and mimicking what they see on the ranch, including taking the cows to the sale barn. There is even a farmer with a pitchfork among the free-standing panels and a white pickup, complete with shiny wrenches, an air compressor and a scoop shovel. 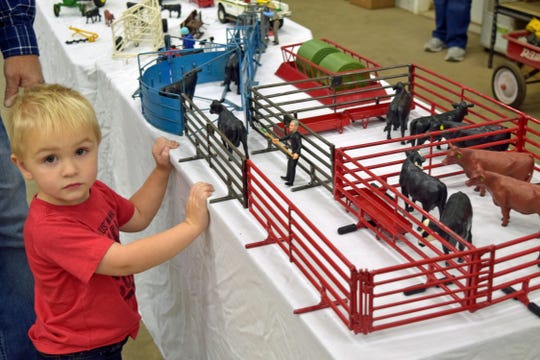 The cattle gates are popular. Dave said, “I can’t tell you how many freestanding panels I’ve made for little folks. They are pretty much indestructible.”

Dave started making smaller versions of cattle equipment after he’d attended the Edgar Brothers bull sale in Aberdeen many years ago. Dave had a bull in mind and got him. He noticed that Great Grandma Edgar went to Runnings to get a farm set as there were a bunch of little cowboys around. They destroyed the plastic version by the end of the sale which frustrated her.

“I thought about that and went home and built a set and put the Edgar name on the gates. I asked them to come to the toy show in Aberdeen where I had my display. When she saw it, she said, ‘I’ll take them all.’ ”

Dave keeps the first version he makes for himself. “If someone sees it and wants one, I’ll make one. I sell a few to support my habit. I have all my spare parts and welding equipment in the shop.”

“The hardest part, at first, was learning where to get materials. The round tubing is the steel brake line used in cars. The round stock I get at Farm Power, the wheels come from a company in Madison. That’s my only real expense.” He bends the 22-gauge sheet metal to form the feeding equipment. 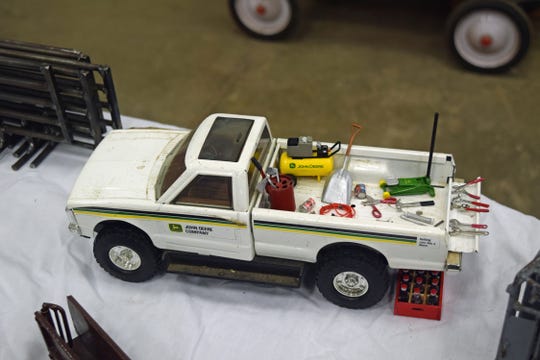 Dave has a goal of competing in the scratch-built portion of the international toy show held at Dyersville, Iowa. They invited him this last year but with the conditions, he knew he’d not comple his farm work by the first part of November. Someday, he’d like to compete.

Dave gets great joy from seeing his grandkids and other kids play with the toys.

“At the shows, you see all kinds. Some families come by and the 30-year-old dad is intrigued, but their kids are not interested and are playing on their electronic devices. Other times, kids come up to the table and their eyes get big. They point to some pieces and whisper, almost reverently, ‘we have that one.’ That’s what it’s all about.“