In just a split second, an accident can change a life, and the future of a farm forever. 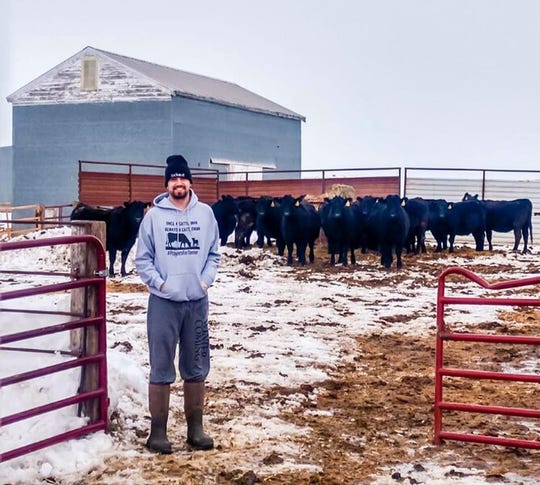 Tanner Overby lost five fingers and nearly lost a whole hand, but his biggest concern? How will this impact the farm. (Photo: Courtesy of Megan Ternquist via Farm Journal)

As a polar vortex tore through the Midwest and Northern Plains January 30, 2019, frigid temperatures were among the least of 25-year-old Tanner Overby’s mind. It all happened in what felt like double time, while the time it took for him to be rescued felt like slow motion.

“I was greasing the mixer wagon to feed cows when the glove on my right hand pulled my arm in,” the Binford, North Dakota crop and cattle producer says. “I, without thinking, instinctively used my left arm to try to catch it. My arms stopped the mixer wagon, which is what made my dad realize there was something wrong when the belt started to squeal.”

In a split second, Overby’s world was forever changed.

For the next month he, and his then-girlfriend, lived in a St. Paul, Minn. hospital where he was in and out of surgery almost every other day. All told, he lost five fingers, his pinkie and thumb on his left hand and his pointer, middle and ring finger on the right hand. He was lucky he didn’t lose his entire left arm because of lost tissue and infection.

“His final surgery, No. 12, was February 22, 2019,” says Megan Ternquist, Overby’s fiancé. “The hardest part was when we came home and started recovery and therapy—it was a doctor’s appointment almost every other day. The nearest doctor that could provide the care he needed was 90 miles away.”

This whole experience wasn’t cheap either, the helicopter ride alone cost $38,000 and his running total for medical bills is $640,000.

Health insurance can save the farm

“Before this experience I was more casual about health insurance, like, I knew you should have it, but it wasn’t such a priority,” Overby says. “A year ago, I actually took out accident insurance on myself, too, but I never thought I’d use it.”

Health insurance is a major barrier to entry for young farmers, and a hurdle for experienced farmers, too.

“At times, young people are of the perspective that they are healthy and don’t need health insurance,” says Alana Knudson, co-director, NORC Walsh Center for Rural Health Analysis. “But it’s these kinds of injuries that can contribute to bankruptcy.”

“I remember asking my mom if we were going to lose the farm over this,” he says. “All told, after insurance I paid maybe $9,000.”

Monthly cost for health insurance varies, but Health Markets pegs the average benchmark plan at $477 per person, down to $207 with subsidies. This doesn’t include out-of-pocket costs or deductibles.

“A catastrophic coverage plan covers the bare minimum and has a high deductible,” says Shoshanah Inwood, assistant professor of community, food and economic development at The Ohio State University “Keep in mind it will not cover preventative care. Minor health concerns can spiral into major issues if they aren't treated early. While it seems less expensive upfront, it may create bigger bills down the road.  Do you take your tractor into the shop only after it's been banged up in a major accident or do you do regular maintenance to ensure all the parts are running smoothly to minimize the likelihood of an accident or equipment failure?”

Consider what risk you’re taking with catastrophic coverage plans. You could end up having lots of bills that don’t hit your deductible, which can add up quickly. But for farmers in good health, who are willing to take on that risk, it’s a lower-upfront cost option that can help in the case of accidents and other big-ticket bills.

Once Overby gets married, a day that’s fast approaching, he’ll be added to Ternquist’s health insurance, but for now he’s wading through unfamiliar waters in the open market.

As farmers shop the open market, they need to answer a few questions about each option:

Open enrollment for health insurance began Nov. 4, 2019 and ends Dec. 15, 2019. Come January, it will be Overby’s first year shopping the open market, as he turns 26 and isn’t eligible for his parent’s insurance anymore.

The future is bright

Overby and Ternquist, who had only been dating six months when the accident happened, will get married June 13, 2020. This will end Overby’s health insurance conundrum, and despite losing half of his fingers, he still managed to keep his left ring finger.

“It’s been humbling to see the outpouring of support we had from the community—it helped in a big way,” he says. “It was unreal.”